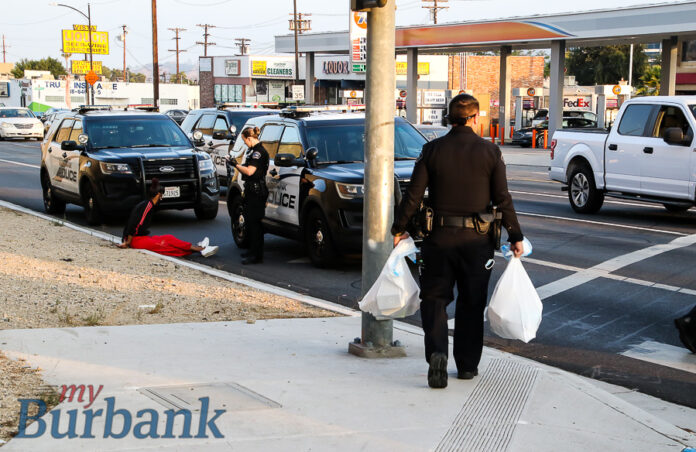 Alert officers and quick work resulted in the arrest of two woman who tried to steal perfumes and colognes from Ulta in the Empire Center Monday afternoon.

Accoring to Lt. Claudio Losacco of the Burbank Police Department, “Officers were in the Empire Center parking lot patrolling for retail theft related crimes and other nefarious activity.  While in the lot, the officers saw two females run out of ULTA, carrying two large weighted trash bags.

The females got into a car and drove out of the parking lot at a high rate of speed.  The officers believed the females had just committed a theft and followed them.  As they were trying to catch up to the car, dispatch broadcast a theft call from ULTA, with the suspect description matching the females the officers had seen.”

Officers were finally able to pull the car over at San Ferando Blvd and Buena Vista as the suspects fled for the freeway. Once stopped, officers could hear the alarms sounding on the stolen merchandise that was valued around $4,000.

“The investigation revealed the women took the merchandise, over three dozen perfumes and colognes, off the shelves and dumped them into their makeshift booster bags, before fleeing the store with the sensors sounding. The crime was captured on video and clearly shows the two women stealing the fragrances and fleeing the store.” according to Losacco.

The women have been identified as Asja Hansbraugh, a 19-year-old from Norwalk and Maya Robinson a 22-year-old female from Los Angeles.

They were both booked into the Burbank City Jail for burglary and grand theft and are scheduled to appear in court on Wednesday morning.

On July 21, Governor Newsome signed legislation targeting organized retail theft since many ‘crime rings’ have been traveling throughout the state stealing from retail businesses.