A “sting operation” conducted by the Burbank Police Department put a couple of scam artists behind bars, and recovered several thousand dollars that they had taken from their victim in a bogus car sale operation. 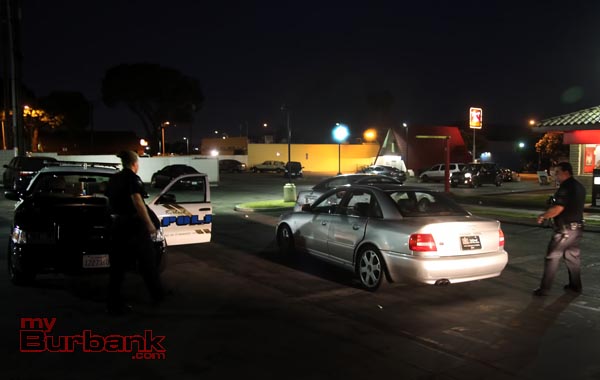 Burbank Police gather evidence with the alleged suspects vehicle, prior to impounding it for further investigation. (Photo by Ross A. Benson)

The victim, an 18 year-old woman from Palm Springs, had answered an ad on Craigalist, an online classified ad service, for a 2009 Honda Civic.  According to Lt. John Dilibert of the Burbank Police, the woman met with the suspects in Burbank and purchased the car for $10,600. She then returned home to Palm Springs with the car.

On Sunday morning, the woman awoke to find her newly purchased car gone.  She contacted the Palm Springs Police Department to report the stolen car, and was told by them that the “pink slip” vehicle title paper was a fake.  She had been scammed by the sellers.  They then advised the woman to contact the Burbank Police Department, since the crime had been committed in Burbank. 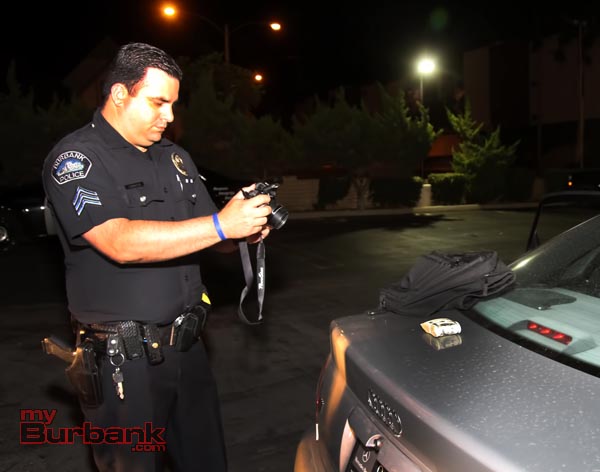 Burbank Police Sergent Claudio Losacco takes a picture for evidence of a wad of $100 bills that was recovered from the suspects car. (Photo by Ross A. Benson) 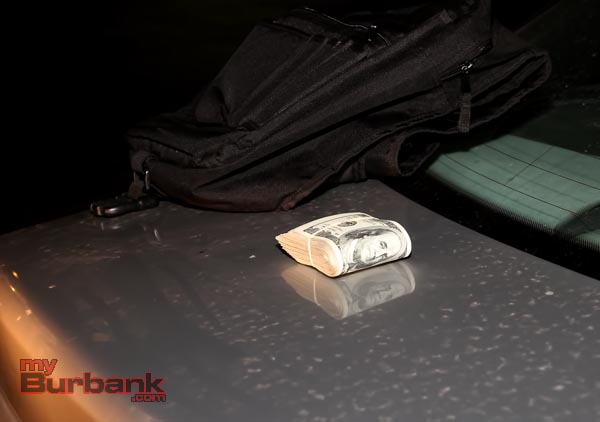 Officers from the Burbank Police Department located the car for sale ad on Craigslist and set up the sting operation, agreeing to meet the suspects near the Ralphs Market parking lot at San Fernando Blvd. and Cornell Dr. The suspects, Kayla Alena Pouncy, 18, and Jose DeJesus Madrigal, 30, both of Vallejo, showed up at the location with the car shortly before 7:30 p.m. Sunday.  Pouncy was in the Honda Civic, and Madrigal was in another car nearby.

According to police, the undercover officers identified themselves and detained Pouncy.  Madrigal, who was driving the second car, returned to the scene where Pouncy was being detained. When officers approached his car and attempted to talk to Madrigal, he sped away. One officer was knocked off balance by the car.  He was not injured.

The fleeing suspect only got a block away before his car stalled.  Madrigal then jumped out of his car and attempted to run into McCambridge Park with police in hot pursuit.  An officer was able to tackle the suspect and take him into custody near Scott Rd. and San Fernando Blvd.   Madrigal, who was barefoot, suffered a scratch on his toe and redness to his back.  No officers were injured during the arrest.

Both suspects were arrested for grand theft.  Madrigal was also arrested for assault with a deadly weapon on a police officer.  His bail was set at $30,000.  Pouncy’s bail was set at $20,000.  Police were able to recover most of the money that the pair had taken from their victim.    They are also interested in hearing from anyone else who may have been a victim or come into contact with the pair.    The case is being presented to the District Attorney to determine what charges the pair will face. 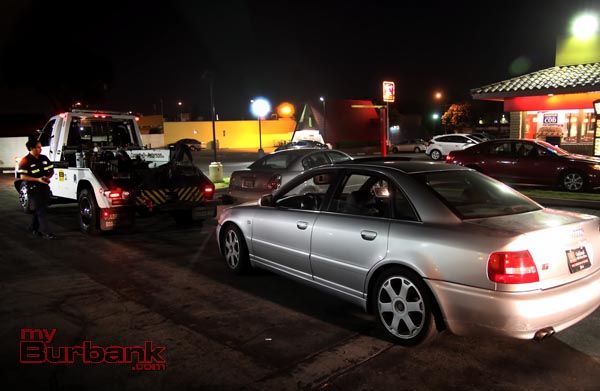 The alleged suspects car was impounded for evidence and further investigation. (Photo by Ross A. Benson)