On October 7, 2015, between 2:45pm and 3:30pm, the yet to be identified suspect depicted  gained access to the Bret Harte Elementary School Campus, 3200 Jeffries Avenue, Burbank. Once on campus, the suspect walked into an unoccupied classroom. She stole a credit card and money from a teacher’s purse. The suspect later used the credit card to make purchases at stores in Glendale and Burbank.

The suspect is not a parent of a child who attends Bret Harte, nor did she have any legitimate reason to be on the school campus. 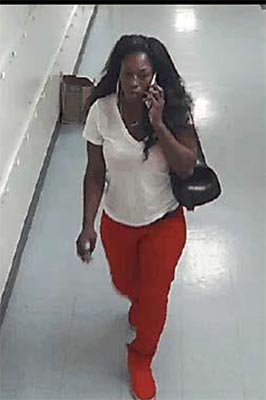 The suspect in this case is also considered a person of interest in similar crimes in La Crescenta and El Segundo.