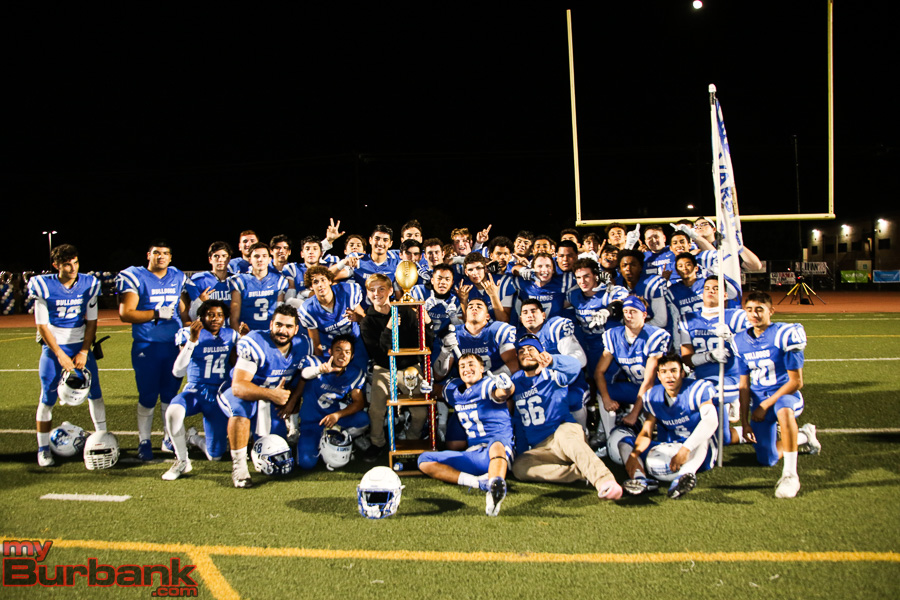 Matthew Porras probably shouldn’t have even suited Friday night for Burbank High when the Bulldogs took on Burroughs in ‘The Big Game’ at Memorial Field.

Porras, who said he had been vomiting less than 24 hours earlier, threw a career-high and school record seven touchdown passes in a 54-20 over the Indians.

“He threw up three different times at walkthroughs yesterday,” Burbank coach Adam Colman said. “He’s such a warrior. He has meant so much to our program.”

“This morning I threw up at about 5 in the morning. Then I had a bunch of fluids and came to school,” said Porras, who said he only had soup and saltines.

Burbank (7-3, 6-1) will now learn its fate Sunday in the CIF Southern Section playoffs.
“We were working out the day of the CIF championship last year. We talked about going after a ring.

That’s been our goal since day one,” Colman said.”We’ve got hopefully four more weeks to chase that.”

Burroughs (2-8, 2-5) came in as a heavy underdog but gave Burbank everything it had.

“The journey this team went on was huge,” Burroughs coach Rand Holdren said. “If we were to start the season from today, it is a different story. These kids left it all on the field tonight.”

Burroughs stunned the Bulldogs when junior Aiden Forrester returned the game’s opening kickoff back 90 yards for a touchdown.

Burbank came right back and scored after just four plays from scrimmage.

Porras hooked up with junior Isaac Glover on a 10-yard touchdown pass. Glover also scored Burbank’s lone rushing touchdown, which came at the 10:24 mark of the fourth quarter.

Porras ended up completing 20 of 30 passes for 305 yards with just one interception.
Porras and Erik Harutyunyan hooked up on a 13-yard touchdown with 3:25 left in the first quarter to make it 14-7.

Harutyunyan finished with eight catches for 173 yards and two touchdowns.

Porras and junior Ben Burnham hooked up on a 16-yard touchdown with 34 seconds left in the first quarter. It was the first of two touchdowns he would score.

Burbank, which also received a pair of touchdowns from tight end Duncan Smith, led 27-13 at halftime.

Burroughs quarterback Nathan Piper hooked up with Nick Garcia on a 9-yard touchdown with 3:22 left in the first half. The took would hook up later on a 31-yard touchdown in the third quarter.

Porras broke the single-game touchdown pass record when he hooked up with Burnham with 1:58 left to play.

Piper completed 15 of 30 passes for 171 yards in the final game of his career.