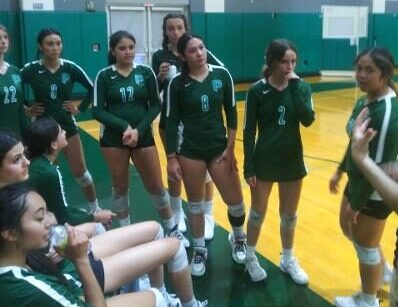 Having begun a new chapter in the program’s history, it’s been a gradual learning process for the Providence High girls’ volleyball team throughout the season.

The Pioneers have a new coach in Shelby Stanger and just a couple of returning starters to help guide the players new to the varsity stage.

While Providence (14-10, 2-6 in league) showed improvement since being swept by Rio Hondo Prep (3-6 in league) earlier in the season, the defeat Tuesday might have put a dent in Providence’s plans to qualify for the postseason. The Pioneers dropped to fifth place in league with four league matches remaining. The top four teams qualify for the CIF playoffs.

“We played really hard throughout the match and so did Rio Hondo Prep,” Stanger said. “We got swept by them the first time, but we played a much better overall match tonight.

“We still have some things to work on and we’ll continue to get better. It’s tough because we are young, but we just want to see progress along the way.”

Amirian said the Pioneers couldn’t quite solve the Kares in the last two sets.

“We felt good when we led 2-1,” Amirian said. “Things were going well, but we had some trouble in the last two sets. It’s good experience for a lot of our team. We learned some things and we just have to keep at it the rest of the way.”

Rio Hondo Prep led throughout the fifth set, jumping out to a 6-1 lead on an ace from Emma Carson. Later in the set, the Kares received an ace from Avery Pollock to make it 12-4. Providence could get no closer than 14-8 on a kill by Ferrell before the Kares sealed the win.

The third set went back and forth. Rio Hondo Prep held a 10-7 lead and Providence stormed back to take a 16-12 lead on an ace from Ferrell. The Pioneers capped off the win on a kill by Ferrell.

Amirian had six kills in the second set, including one down the right side to give the Pioneers an 18-16 advantage. Another kill by Amirian tied it at 21. The Kares finished on a 4-2 run to knot the match at one set apiece.

“We won a couple of five-set matches earlier in the season,” said Stanger, who got eight kills and five blocks from middle blocker Luciana Mongelli. “It’s a very big confidence boost when you can get to a fifth set in a match and give yourself a chance to win.”

Providence will next meet Pasadena Poly, which won the league title last season, in a home match at 6 p.m. Friday.