A Propane gas leak from a 10,000 lb. storage tank at Providence St. Joseph’s Medical Center prompted the Burbank Fire and Police Departments to shut down part of Buena Vista St. and the neighboring Providence High School gymnasium yesterday, January 14. After a sensor alerted the hospital Facilities Department to a small leak in one of the two 10,000 lb. Propane/Liquified Petroleum Gas (LPG) storage tanks, the Burbank Fire Department responded to the site at 1:00 p.m. to investigate and monitor the situation, according to Medical Center spokesperson Patrician Aidem. 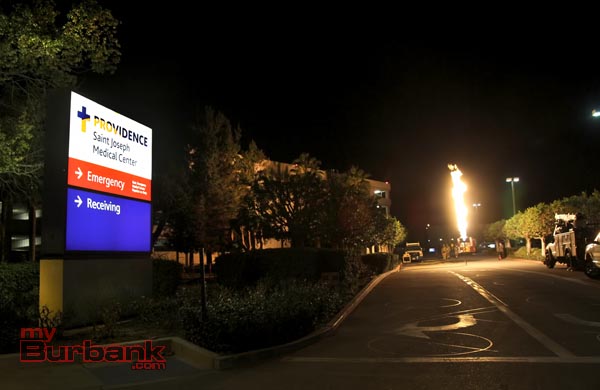 Burbank Firefighters & Burbank Police stand by as propane is burned off at the entrance to the emergency room at Providence St. Joseph’c Medical Center. ( Photo by Ross A. Benson)

AmeriGas was called in by the hospital to provide technical support and responded with an initial plan to pump out all of the liquid fuel from the affected tank. However, the valve on the storage tank was a bit corroded and fell off, according to Capt. Peter Hendrickson, BFD Public Information Officer. The Fire Department’s Hazardous Material Team put on full protective gear and had to enter a small hole-like space, about four to four-and-one-half feet in height, to beat the valve and turn it to the right position. AmeriGas was then able to pump out all of the liquid Propane in the tank to a waiting tanker truck.

However, a small amount of gaseous Propane remained in the tank, and at approximately 1:00 a.m. this morning, January 15, AmeriGas flamed out the remaining gas, sending plumes of fire 25 to 30 feet into the nighttime sky. The burn off process took about three hours to complete, and the BFD cleared the scene at 4:15 a.m. and reopened Buena Vista St. to auto and foot traffic.

The storage tanks are located near Providence St. Joseph’s emergency room driveway entrance at 501 S. Buena Vista Street. Providence High School’s gym is also located nearby and was evacuated during school hours on Tuesday, just as a precaution. The emergency room remained open while ambulances and cars were diverted to the S. Naomi St. entrance side.

“We train all the time for these types of situations and disasters,” commented Aidem. “We were assured by the Fire Department the patients were never in danger, so we kept the emergency room open.” 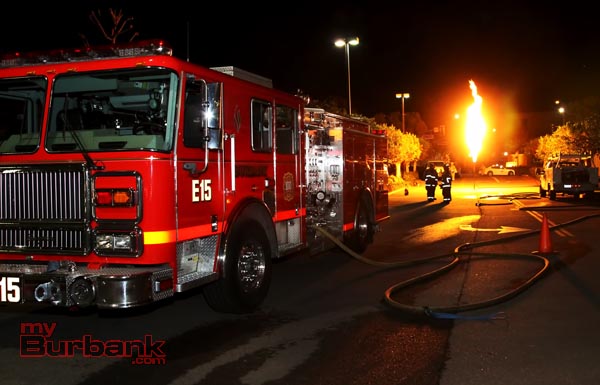 Burbank Engine 15 and 3 Firefighters stand by as propane is burned off. ( Photo by Ross A. Benson)

Three fire engines stood by with hoses laid out, to monitor the situation and be at the ready. Burbank Police Department kept the 500 block of S. Buena Vista closed throughout the long process. The hospital’s two 10,000 lb. LPG tanks are an emergency supply to fuel the facility’s boilers which in turn runs the heating and cooling systems. Typically, the hospital uses natural gas, but if that supply is interrupted, the LPG tanks are switched on.

“There was a leak in the same tank twenty years ago after the Northridge earthquake,” commented Capt. Hendrickson. “And, the same driver [service tech] for the same gas company truck who responded to [fix] that leak was there for this leak.”

Buena Vista St. has been reopened and activities at the high school and hospital have returned to usual today, while AmeriGas continues its work on site, repairing the tank’s valve and fixing the leak. 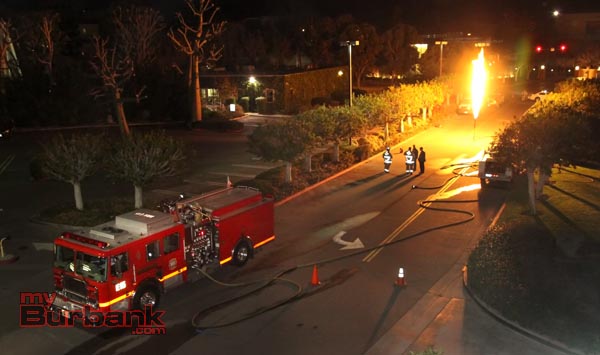 Burbank Firefighters stand by as propane is burned off following a day long Hazmat situation at Providence St. Joseph’s Medical Center. ( Photo by Ross A. Benson)