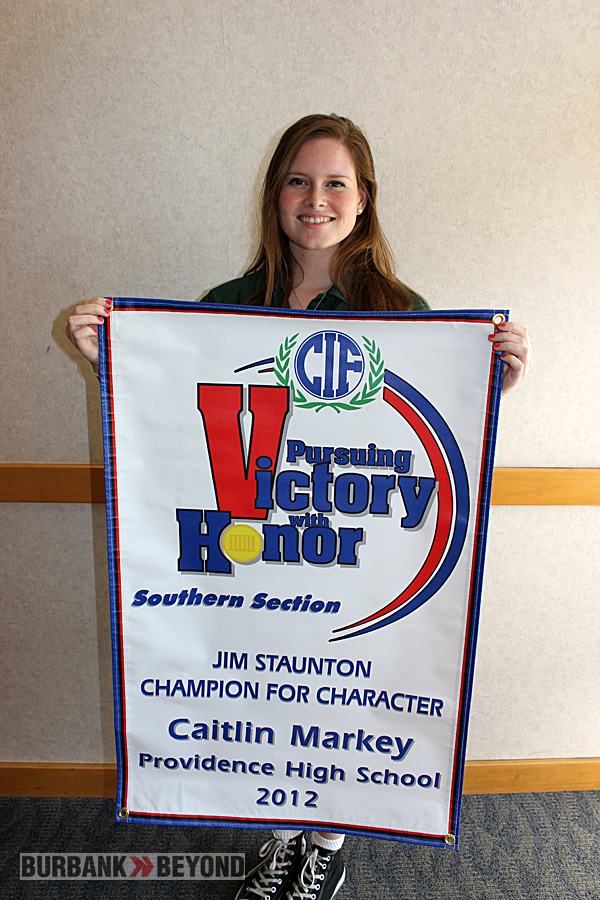 A full week after winning a prestigious student-athlete award, Caitlin Markey is still smiling from ear to ear. But then again, the Providence High School senior is always smiling. Markey is confident but humble. She is intelligent and full of promise. She is a natural leader and inspirational teammate.

“Caitlin represents our school very well,” said Athletic Director Andrew Bencze, who nominated Markey for the award. “She handles herself with class and dignity.”

On October 1, 2012, Markey was honored by the CIF Southern Section at the 9th Annual Dr. Jim Staunton Champions for Character Ceremony at the Queen Mary in Long Beach. The award is given to student-athletes, coaches, administrators and schools who best embrace good sportsmanship and the principals of “Pursuing Victory with Honor.”

Markey was just one of 14 students to be recognized.

“I like talking to people and I love being a leader,” she said.

Not only is Markey a leader in the classroom and on the soccer field, but she is the ASB President as well.

“Balancing academics and athletics with ASB is definitely a challenge, but it is totally worth it,” she said with a smile. “You just have to manage your time properly.”

As a sophomore, Markey experienced success on the soccer field as Providence was loaded with talent and veteran players. However, her junior year was more of a challenge as the team lost nine players to graduation and victories were few and far between. She was forced to step up and lead the team through a difficult season.

“It’s easy when things are going well,” Bencze said. “But Caitlin shined last year as a junior when times were tough. She handled herself very well.”

Markey’s ability to shine in the face of adversity is one of the main reasons Bencze nominated her for the award. She is the first student from Providence to win such an award. Last year, Victor LeBreton, the school’s vice-principal, was honored with a character award and the school as a whole was honored as well.

The ceremony was attended by approximately 300 people and lasted about two-and-a-half hours. In addition to a trophy, banner and letterman patch, Markey received a $500 scholarship during the event. She is currently researching colleges and prefers to attend school locally next year at UCLA or LMU.

An honor roll student and oldest of four brothers and sisters, Markey credits her mother as her biggest inspiration.

“She is the greatest example for all of us,” Markey said. “My mom is a true champion.”