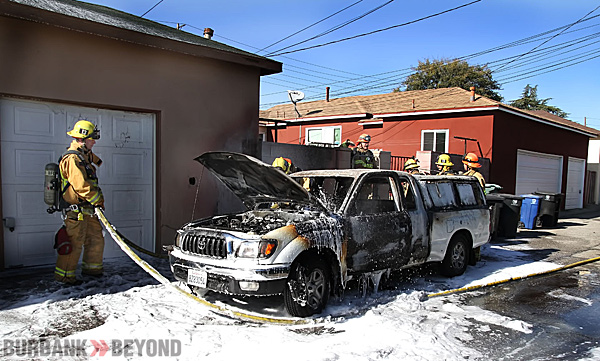 Burbank Firefighters extinguished this truck fire in the 1900 block of Ontario St. on Thursday afternoon. (Photo by Ross A. Benson)

Burbank Firefighters and police responded to several 911 calls of a truck into a garage with a person trapped inside and on fire Thursday afternoon.  Upon arrival Burbank Firefighters found a small pickup truck in a rear alley in the 1900 block of  N. Ontario with the cab and engine were well involved with fire, with the fire having the potential to spread to the garages the truck was parked next to.

Quick action by Burbank Firefighters stopped the blaze from going anywhere. Damage to the truck was reported to be $ 20,000 and the damage to the garage was $ 2,000. Fire units were under the direction of Battalion Chief Steve Briggs.

There were no injuries to civilians nor firefighters. Burbank Police closed local streets and the adjoining alleys, until the fire was extinguished and the truck towed.