Cancer survivors, friends and family came out this weekend to support the American Cancer Society’s Relay for Life that continued for 24 hours, from Saturday to Sunday morning. More than 700 registered to walk. People at booths offered information such as wearing sun block, eating fresh vegetables and getting tested for early detection~ the best defense against the disease.


Teams of residents and business people came together to walk in the fight against cancer during the American Cancer Society’s Relay for Life, a 24-hour event that began at 9 a.m. Saturday and ended at 9 a.m. Sunday at Johnny Carson Park. 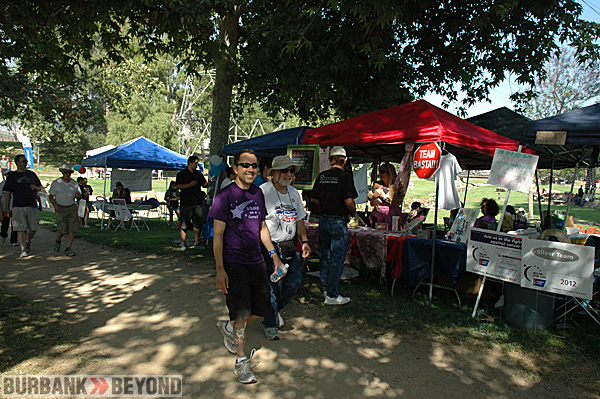 Larry Rangel, left, of Santa Clarita, and Henry Gross of Burbank walks in the American Cancer Society Relay for Life Saturday, May 12, 2012 at Johnny Carson Park in Burbank. The 24-hour walk started at 9 a.m. Saturday and continued until 9 a.m. Sunday. (Photo By Joyce Rudolph)

The walk continues for 24 hours because cancer never sleeps, said Daniela Barragan, Relay for Life manager, who is based in the American Cancer Society’s Burbank office.

“This event celebrates three things, honoring cancer survivors, remembering those we have lost and fighting back against the disease,” she said.

The Burbank walk was organized by volunteer co-chairmen Nate Frey and Michelle Jacobovitz and 22 committee members. More than 700 people registered. Each year more than 300 events like this are held across the state and 5,000 events are held throughout the country, Barragan said.

Part of fighting back is raising funds and awareness, Barragan added.  The funds raised from the Relay go to cancer research and free services, like free wigs for chemo-therapy patients and rides to
treatment. Several booths set up along the route were sharing information on the importance of wearing sun block, eating more vegetables and getting tests for early detection ~ the best way to win
the battle against cancer.

Among the teams walking were Chad’s Champions, in support of Chad Becken, 37, who is fighting colorectal cancer; and Dan the Man team, honoring the memory of Dan Linegar, founder of the Burbank Relay event, who passed away from esophageal cancer in November.

What Chad Becken’s illness proves is that colon cancer isn’t only contracted by older people, said his mother Susie Becken. People in their 20s and 30s should start getting tested for colorectal cancer,
especially if there is a history of cancer in the family.

“A simple colon test can save your life!” she said. 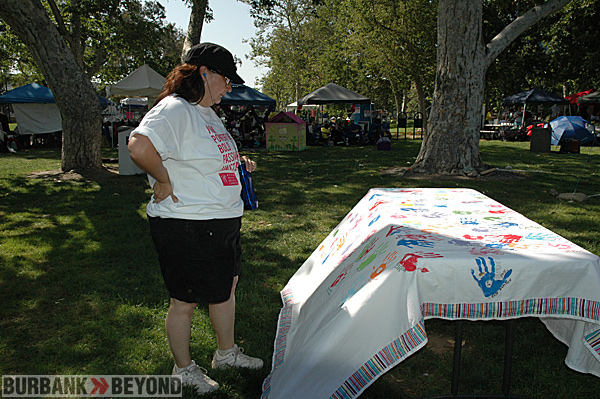 Veronica Hudson, cancer research coordinator at the Roy and Patricia Disney Family Cancer Center, looks at the handprints and names of cancer survivors during the American Cancer Society Relay for Life on May 12, 2012, at Johnny Carson Park in Burbank. (Photo by Joyce Rudolph)

A special tribute in honor of Dan Linegar was held during the luminaria ceremony on Saturday evening. More than 500 illuminated paper bags lined the park, in the names of survivors and those who had passed away.

Linegar was a huge supporter of Burbank Temporary Aid Center and ran its Santa’s Room for five years, said Victoria Sands of Burbank.

“I feel this event is his legacy,” she said.

A group from the Burbank High School Key Club, a young adult branch of Kiwanis, was getting the luminaries ready for the ceremony.  Participating were Micaela Kingman, 16; Khushbu Patel, 15; Ashley Garber, 16; Ellie Hirahara, 16; Karishma Patel, 15; and Jacob Salomon, 15.

Ellie was volunteering at the event for the second year, she said. She has family members who have survived and passed away from cancer.

“The candlelight ceremony is touching,” she said. “Helping out is really amazing! It’s a good feeling!”

A section of the park had a display of white quilts decorated with multi-colored handprints of survivors. Veronica Hudson, cancer research coordinator at the Roy Disney Family Cancer Center in Burbank, knew many of the names.

“Seeing these patients’ names ~ it’s incredible!” she said. “They are so strong. They just keep fighting.”

For questions about cancer, live representatives can be reached 24 hours a day at (800) ACS-2345. Seven languages are spoken.