All of the honorees this year included: 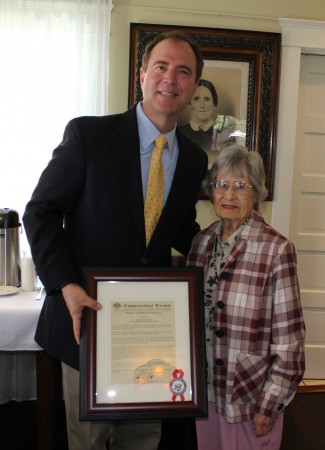 “It was an honor and a pleasure to meet with the 2013 ‘Women of the Year’ awardees yesterday, and to recognize their outstanding work and community leadership,” said Rep. Schiff. “Each woman honored has demonstrated an ability to help others, to work tirelessly for an important cause and to make our communities a better place. They serve as a shining example of service for all of us, and especially young people throughout the 28th Congressional District, and it was my pleasure to recognize their extraordinary work and capabilities.”

Every year, during Women’s History Month, Rep. Schiff honors one outstanding woman from each of the communities in the 28th Congressional District. These women come from all walks of life and represent the thousands of women who make a positive impact in our region. While there are no specific criteria for nomination, Rep. Schiff looks for women who — through their work or volunteerism — have improved the quality of life for our community.

Schiff entered a special tribute to each woman into the Congressional Record, which is also below.

A Tribute to Sylvia Sutton

I rise today in honor of Women’s History Month.  Each year, we pay special tribute to the contributions and sacrifices made by our nation’s women. It is an honor to pay homage to outstanding women who are making a difference in my Congressional District.

I would like to recognize an exceptional woman, Sylvia Sutton of Burbank, California, who for many years, has been educating our community about the Holocaust and other human rights violations.

Sylvia received her B.A. in Psychology from UCLA and her MBA in Marketing and Program Management from West Coast University. Sylvia’s early community efforts included volunteering on the David Starr Jordan Middle School Parent Teacher Association (PTA), and the William McKinley Elementary School PTA, where she received an Honorary Life Membership Award, and as a Girl Scout Leader.

Ms. Sutton’s volunteer activities have included the American Association of University Women (AAUW), Burbank Branch, where she served as President, the UCLA Alumni Scholarship Committee, and the League of Women Voters, Glendale/Burbank. Currently, she is the liaison between the U.S. Holocaust Memorial Council and the City of Burbank, the Coordinator and Presenter of the annual Burbank Days of Remembrance Commemoration of the Holocaust, and has been the presenter of Holocaust speakers in the eighth and tenth grade classrooms of every Burbank middle and high school since 1991. Sylvia is also a volunteer at the Skirball Cultural Center, as well as the Parliamentarian on the Burbank Coordinating Council. In addition, she works as the secretary for Temple Beth Emet of Burbank.

Sylvia has received a number of accolades for her extensive community service, including the Burbank City 1999 Outstanding Senior Volunteer Award, the 1998 Zonta Woman of the Year for Cultural Awareness Award, and the 1991 Burbank Human Relations Council Distinguished Service Award.

I ask all Members to join me in honoring a truly remarkable woman of California’s 28th Congressional District, Sylvia Sutton.