The Roosevelt Choir and the Fourth Grade Class presented their annual holiday show on the morning of Thursday, December 19, in the school auditorium. Conducted by John Pike and Sheryl Hambro, the Roosevelt Choir combines about 85 fourth and fifth graders and meets weekly before school to practice. 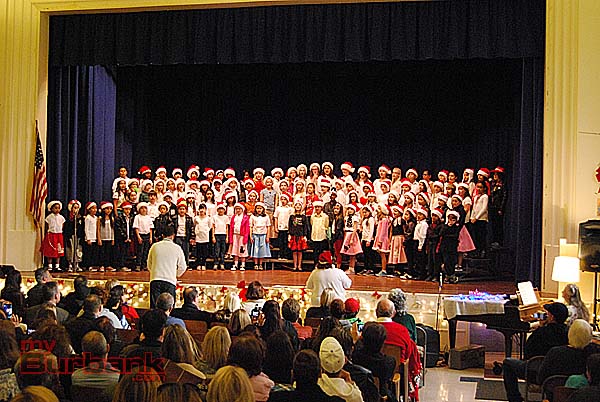 The choir performed six Holiday themed songs, including the Spanish-language “Dale Dale Dale” and the popular “Carol of the Bells.” Volunteer Sue Baker accompanied the choir on the piano, as she does at the regular weekly practices.

About 100 children in the fourth grade followed the Roosevelt Choir with their yearly Holiday Show, performing three songs, including “December Nights,” “Sleigh Ride” and the Elvis Presley favorite “Santa Claus Is Back In Town.” Conducted by Carol Walcoff, the children dressed in a 1950s style and featured some special cameos at the end of the program. Principal Dr. Jennifer Meglemre wished all the families happy holidays and congratulated the children and their teachers on presenting a fun program.

‘Elvis’ makes an appearance at the fourth-grade Holiday program. (Photo By Lisa Paredes)

Rockin’ out to the Elvis Presley classic “Santa Claus Is Back In Town.” (Photo By Lisa Paredes)