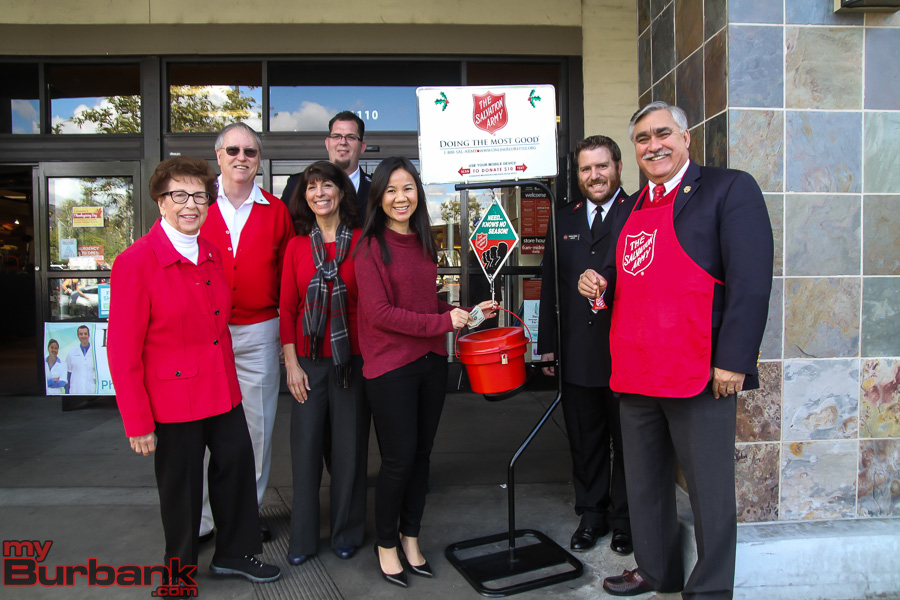 The Burbank Salvation Army kicked off its Red Kettle campaign on Monday with a photo opportunity for the local media at the Burbank Pavilions.

Lt. Jeremy Baker welcomed Burbank Mayor Jess Talamantes along with several board members including Elaine Pease, Lee Stacy, Tauny Vo and lifetime board member Elaine Paonessa. Also on hand was Cadet Ernest Evans who is interning at the Burbank headquarters during the Christmas season.

Last year, a total of $59,000 was collected over the holiday season, Lt. Baker said.

“We raised about a quarter of our annual budget and all of that went to help the community of Burbank,” he emphasized. “Out of every $1 that is put in the kettles, 93 cents go back into the community through the services we offer. The remaining 7 cents go to cover costs to keep the Salvation Army building functioning, like for electricity and phone bills.”

This year there will be 11 Red Kettles set up from 10 a.m. to 6 p.m. at such locations as Pavilions, Von’s on Pass Avenue, Macy’s and all three of the Ralph’s grocery stores. The Ralph’s at 1100 N. San Fernando Blvd. will have two kettles. On the weekends, Porto’s and Handy Market will have kettles at their front doors.

As it’s always a challenge to recruit volunteers to stand at the kettles, Lt. Baker said they will pay community members to ring the bells attracting folks to drop in coins and hopefully dollar bills or more.

“Our bell-ringers are community members who throughout the year are hard pressed to find a good job,” he said. “So around Christmas they come to us and we let them ring bells and they typically do well and it’s a good transition for them. They get work experience and they start re-applying for jobs at the beginning of the new year.”

Lt. Baker recalled one interesting donation that came in last year. A man gave his collection of steel pennies dating back to World War II. His family had been collecting them over the years.

“He donated 186 coins each worth $1, which is not a huge donation, but very unique,” Lt. Baker said.

One day during the holiday season the service clubs in town serve as bell-ringers at various locations and they compete to bring in the most money. The winning service club last year was the Burbank Sunrise Rotary Club.

“Service clubs say how much fun they have going out there,” Lt. Baker said.

This holiday season, the Salvation Army will be partnering with local organizations and businesses to help collect toys and food that will be distributed to those in need on Dec. 19. The Verdugo Hills Council of Boys Scouts already conducted its food drive. Such businesses as Pickwick Ice Arena will be collecting toys and canned goods as well.