October is National Community Planning Month and this year, the City of Burbank has some fun activities for residents to get out and learn more about Burbank, as part of the theme “People and Places.” The City Planning Department has created two engaging activities: a Scavenger Hunt with locations scattered around the City and a 20 mile long Bicycle Tour of Burbank. 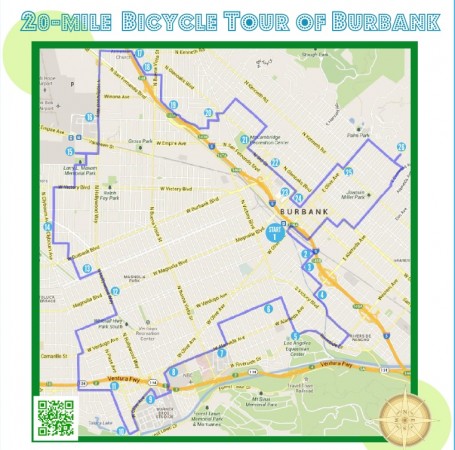 After collecting stickers from or answering site-specific questions for each of the 15 locations, the completed map may be turned in to the City Planning & Transportation Division to be entered in an opportunity drawing to be held November 15. Entries should have printed contact information on the map. The event runs from October 1 through November 8.

The 20 Mile Bicycle Tour of Burbank begins and ends at the Metrolink station on Front St. Maps can also be printed or downloaded from the same website. Bike riders will make 25 stops, ranging from Downtown Burbank, to the northern end of the city, and then travel down the western border of the city, passing Bob’s Big Boy, Warner Bros. and Disney Studios along the southern edge of town. Passing Jordan Middle, the Equestrian Center and Pickwick, bike riders will complete the self-guided 20 mile tour after returning to the Metrolink station. Some other stops of interest are the Rock House, Lovejoy Castle and the Centennial House.

Sponsored by the American Planning Association, the annual National Community Planning Month aims to encourage people to learn more about the cities they live in and how and why those cities were planned.