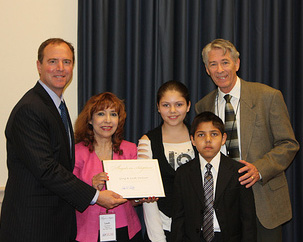 Burbank residents Greg and Leah Switzer were honored this week in Washington D.C. as recipients of the 2012 Angels in Adoption Award for the 29th Congressional District, an annual award sponsored by the Congressional Coalition on Adoption Institute (CCAI). Greg and Leah Switzer were nominated by the Boys & Girls Club of Burbank and Greater East Valley, and selected by Rep. Adam Schiff (D-Burbank) earlier this year.

During the award presentation ceremony, Schiff thanked Greg and Leah for their commitment towards foster care and adoption saying, “Greg and Leah have shown themselves to be true angels by adopting siblings Peter, Alex and Elizabeth. While too many families are separated by the foster care and adoption process, Greg and Leah’s commitment towards keeping this family together sets an incredible example. By opening their hearts and their home to these three amazing children, they have brought joy to themselves and the community.”

When Greg and Leah Switzer were married in 2000, they were both in their late forties. After about three years of marriage, they had the desire and compassion in their hearts to adopt and determined that their home and lifestyle would be perfect for only two children. On September 29, 2007, they attended an adoption fair in Altadena, California, met a young sibling trio of brothers, Peter and Alex, and sister, Elizabeth, and wanted to adopt them immediately. The children had been living in various foster homes for six years, but it was not until they joined the Switzer family that they found a stable, loving home and parents.

In addition to being a large sibling group, the children had special needs which the Switzer family worked together to overcome. Peter, now 15, is an honors student and active in the Boys & Girls Club of Burbank and Greater East Valley, and Elizabeth, 13 and Alex, 11 are involved in the youth group at Magnolia Park United Methodist Church in Burbank, California. All three children enjoy volunteering and giving back to the community.

Greg, a public school teacher, believes that “adoption is such a necessity and the facts and statistics of orphans are just staggering.” Leah, a public relations consultant, has also been a huge advocate of adoption and continues to encourage and educate about its importance through frequent public speaking appearances.

The Congressional Coalition on Adoption Institute’s (CCAI) Angels in Adoption Program is CCAI’s signature public awareness program that provides all Members of Congress with the opportunity to honor the good work of their constituents, who have enriched the lives of foster children and orphans. This week, each Angel attended various Angels in Adoption events in Washington, D.C., including the Pin Ceremony House and Reception and Gala, where all of the chosen Angels from across the country will be honored.

Rep. Schiff is a Member of the Congressional Adoption Caucus and welcomes nominations for next year’s “Angels in Adoption” award. For information on how to submit a nomination for next year’s award please contact Congressman Schiff’s district office at 626-304-2727.