Funds for the Chromebooks and mobile carts will come from Common Core money set aside for technology, professional development and materials, said Sharon Cuseo, Director of Instruction and Accountability for the district.

“This past spring, we had our Smarter Balance field testing and we were able to pull that off pretty smoothly with help from our technology team and our school sites,” commented Cuseo. “The only thing we needed to do to make that happen in terms of purchasing computers was we bought three laptop carts to help the high schools deal with the volume of testing.”

“However, this spring we have the real test and so we’re going to need more support because the test is going to be full length, which is twice as long as the test was in the field testing,” she went on to say. “For example, at the high school, the students will be testing for 8 1/2 hours each students, and so, that is a lot of testing.” 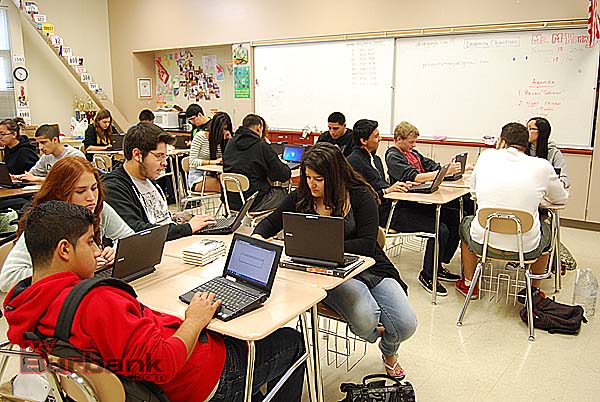 Since the district does not have computer labs, or even the space for computer labs, at every school site, BUSD officials see mobile computer carts as the answer for administering the Smarter Balance test. When the Chromebook carts are not in use for testing, they can be used for instructional purposes in the classroom.

Chromebooks were selected for the purchase, Cuseo said, because “we didn’t want to invest in something that was going to be very expensive and consume all of our Common Core money.”

BUSD wanted to purchase a product useful not only for testing but also for instruction.

To this end, the BUSD technology team determined the 14″ HP Chromebook as a best option. It has 4 gigabytes RAM, a 14″ monitor, a nine-hour battery life and comes with a three-year warranty, explained Charles Poovakan, Director of Information Technology and Educational Support.

Each Chromebook is priced at $312 for the district and can be used for online access and basic word processing. Many apps and programs are available via the internet.

“This would be a computer lab on wheels,” commented Board of Education President Dr. Roberta Reynolds.

The Chromebook carts will only be moved around for testing, added Cuseo. Otherwise, they will stay at specific schools. The three carts purchased earlier this year for the Smarter Balance field testing are already deployed, one each at Burbank and John Burroughs High Schools and one at a district middle school.

The additional ten Chromebook carts will be divided between the high schools, middle schools and larger elementary schools for instructional use.

The school district has been testing iPads at Luther and trying out various technology items at Burroughs and other district schools in its ongoing quest to integrate technology in the classroom.

New Closures and Detours on I-5 Freeway
Packages are Disappearing From Burbank Doorsteps
Hundreds Show Up to Pack Boxes During Thank A Solider Event
Holiday Safety, Security, and Shopping Tips From Your Burbank Police Department