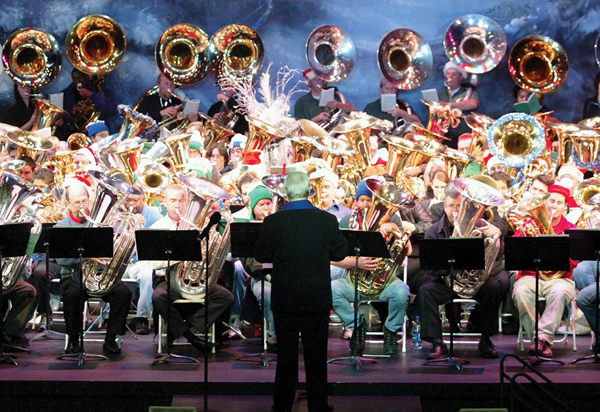 Burbank resident Scott Wilkinson has a new, and rather unusual job.  He will be the conductor for the Los Angeles performance of TUBACHRISTMAS, the annual free concert featuring only the tuba family of instruments, scheduled for Saturday night.

TUBACHRISTMAS, a performance by musicians playing tubas, Sousaphones, euphoniums, and baritone horns, was conceived in 1974 as a tribute to the late artist and teacher William J. Bell, who was born on Christmas Day in 1902.  The first TubaChristmas was conducted by the late Paul Lavalle in New York City’s Rockefeller Center ice rink on December 22, 1974.  The event is now held in more than 200 cities across the United States and throughout the world.

Wilkinson was born and raised in Burbank.  At John Burroughs High School he was the drum major in the band that was directed by the late Robert Rose.  His late father, Robert Wilkinson, headed the music department at Los Angeles City College, and was a composer.

“After he retired from teaching, my dad wrote music for tuba quartets,” said Wilkinson, adding, “My dad was a saxophone player, but wrote these because I played tuba.”

A graduate of the University of California at Santa Cruz, Wilkinson got his degree in physics.  He played with several orchestras and bands including the Santa Cruz County Symphony, and the Cabrillo College Jazz Band.  He is a tuba and euphonium player. Although he is a professional musician, Wilkinson is probably best known as a journalist covering consumer electronics.  He has a web site, www.HomeTheater.com and a print magazine by the same name.  He can also be heard each  Sunday  at 11:30 a.m. on the Leo Laporte’s “The Tech Guy” radio program which is broadcast on KFI  640 AM.

In Los Angeles, TUBACHRISTMAS was first performed in 1976 under the leadership of Jim Self.  He is a professional musician. You may not recognize him, but you probably have heard his music.  In the movie “Close Encounters of the Third Kind,” Self playing his tuba is the voice of the alien mother ship.

When Jim Self decided to retire, he approached Wilkinson, asking if he was interested in the job, or knew someone who might be.  Wilkinson didn’t give it a second thought in accepting the job, which he described as “a lot of work.”

He will be conducting more than 200 musicians will be performing Christmas music when TubaChristmas is performed Saturday evening at Hall of Liberty at Forest Lawn Hollywood Hills.   It will mark the 36th TUBACHRISTMAS in Los Angeles.  In addition, Wilkinson is the coordinator for the event, which means he has to get the word out to musicians, make sure everyone has the music, and arrange for a place to perform.

“Performers range in age from 8 to 80,” accordiong to Wilkinson,  “Some are professional musicians, some are students, and some are tuba hobbiest,” Among the professionals  playing in the concert will be The Tubadours, a quartet of talented players who are always a hit with the audience.

Locally, TUBACHRISTMAS has been held at the Music Center,  the Alex Theater in Glendale, and now at the Hall of Liberty. Wilkinson, along with fellow Burroughs Class of 1971 alumnae Cheryl McMillan, has played in most of the TubaChristmas performances during the past 35 years.  McMillan will be helping her friend out by handling the registration of musician on Saturday afternoon, as well as playing her baritone horn.

Saturday night’s concert will be held from 6 to 7:15 p.m. at the Hall of Liberty at Forest Lawn Memorial Park, Hollywood Hills, 6300 Forest Lawn Dr.  Admission and parking are free.

If you are a tuba player, you still have time to be in this year’s TUBACHRISTMAS.  Registration at the Hall of Liberty is from 2-3 p.m., followed by a rehearsal from 3-5 p.m. There is a $5 registration fee.  Music books are also available for purchase.  More information is available at the TubaChristmas L.A. web site.