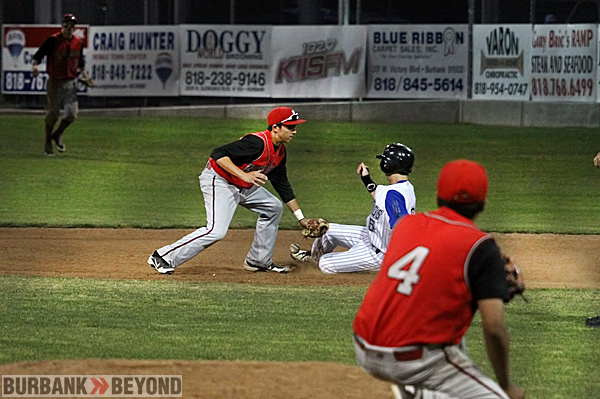 CLAREMONT — Members of the Burbank High baseball team weren’t even born the last time the Bulldogs were relevant enough to be competing for a league champioship on the season’s final date.

So despite a disappointing final few days to the 2012 season, the Bulldogs take some comfort in a season of growth and progress which ended Tuesday, May 15 with a 6-1 loss at Claremont High School in a CIF Southern Section Division II wildcard game.

“Really, it sounds like coach’s speak but I am pleased with the steps we took this year,” Coach Bob Hart said late Tuesday. “Our handful of seniors really pass the baton off in style with their work both on and off the field, from the way they carried themselves at practice each day to the way they took care of business in the classroom — these guys were the types of players you would be proud to call a son. It will be a banquet to look forward for sure.

“We also return a pretty solid young nucleus, so I am excited with what we have to look forward to as well,” Hart added.

One of the seniors, Paul Frias, staked the Bulldogs to a 1-0 lead at Claremont with a solo home run. It would be the only run the Bulldogs would muster off of the Wolfpack’s ace, Kenny Chapman.

Starting pitcher Andrew Hernandez was effective through five before running into some trouble late and leaving in the sixth inning trailing 4-1. A pair of relievers failed to keep the game close as Claremont opened-up a five run lead in the inning en route to the win.

“Andrew pitched much better than the final score would indicate and frankly the game was much closer that that,” Hart said. “I felt like it was one of those games where something was going to give and unfortunately it was us.”

Burbank finished the season 13-10 overall and 10-4 in league following a 2-0 loss to Burroughs last week in the season finale. Its 13 wins and second place finish are both the best showings for the Bulldogs in 20 years.