Burbank Fire responded to a reported smoke alarm inside the structure at 3300 Riverside Drive late Saturday night. Once the single engine on scene entered the building they found smoke banking down low on the second floor of the New York Film Academy located at 3300 West Warner Blvd. 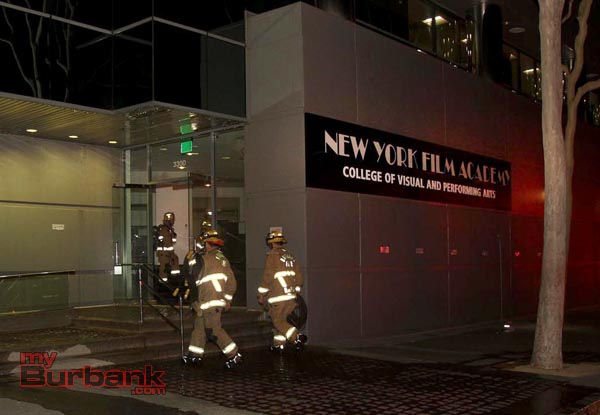 A full alarm assignment was requested and with sprinklers flowing and strobes going off, the firefighters proceeded to the floor where the alarm was coming from.

The fire was located on the floor above the first level parking garage. The fire was contained to one area and was kept in check by a fire sprinkler overhead. Water from the flowing sprinkler filled the floor quickly, and once the fire was extinguished, firefighters had the job of removing thousands of gallons of water from the building.

The amount of water and smoke removal that required a second alarm to be called brought several more pieces of equipment and personnel. Mutual aid from Glendale automatically filled the empty Burbank Fire Stations and an Air Utility and Battalion Chief from Glendale also responded to the scene. 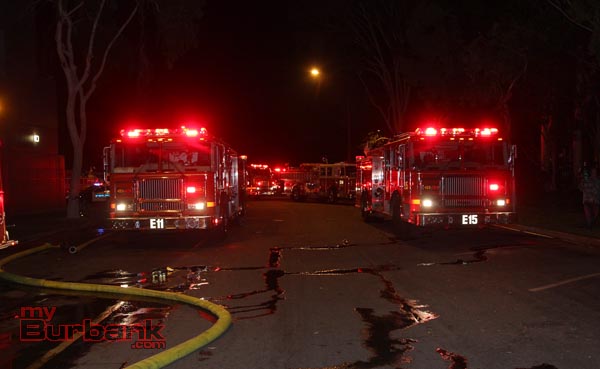 Firefighters using mops, squeegees, and special water vacuums took hours removing the standing water on the floor where the fire was located. In addition to the water removal, the firefighters used fans to clear the smoke in and around the floors.

The cause of the blaze appeared to be accidental and is under routine investigation by a Burbank Fire Investigator. Damage was not available at this time. There were no injuries to fire personnel during this incident. The firefighters were under the direction of Battalion Jeff Howe as Incident Commander.

Burbank Police Department had officers close Warner Blvd. during the incident for the safety of firefighting personnel. They also handled crowd control in the area. 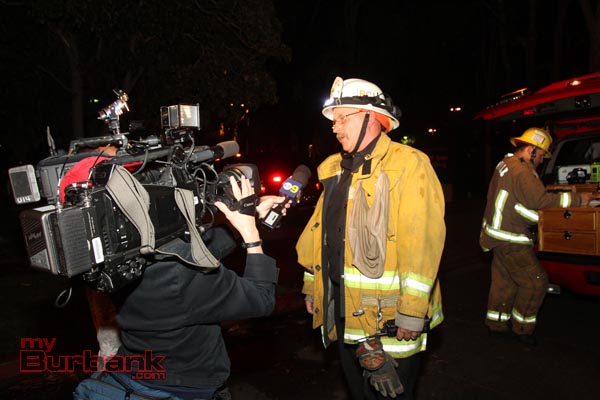