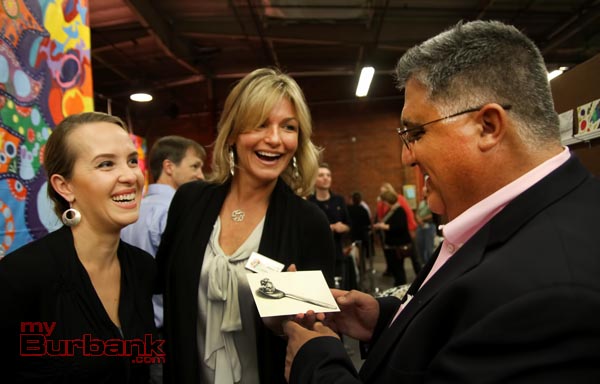 The Secret Art Show held Friday evening, November 1, at ATB Studios in Burbank was a smashing success, raising over $24,000 for Burbank Arts For All (BAFA.) Close to 400 people attended the gala event, which grew more crowded as the evening wore on. Just about everyone involved with the arts and the schools in Burbank stopped by: BUSD principals and administrators, art teachers, city and area officials, entertainment and animation company executives and artists, art enthusiasts and parents and children from the community.

The large open space at ATB Studios was peppered with tall, shelved boards on which the 4″ x 6″ artworks were placed. Volunteers wearing white gloves picked up the art to show would-be buyers a closer look and placed purchases in a brown paper bag. Once people purchased the art, they could turn over the creation to find out the name of the artist, signed on the back of the piece.

Sofia Borack, age 15 and a freshman at Burroughs High School, and her sister, 18-year-old Miranda Borack, a student at Otis College of Art & Design who enjoys creating art with pastels, ballpoint pen and with digital interfaces, helped out at one of the art display boards, alongside their mother, Jeanette Elliott, an artist and art teacher. “Our entire family is involved with the arts,” commented Sofia, whose favorite mediums include pencil drawing and digital art. “We also like volunteering at various events in our community.”

Live art painting by Randall Williams was a big hit and his two artworks were auctioned off at the end of the evening, raising additional money for BAFA. A DJ kept the party music bumping and Rosenthal Winery provided complimentary wine and cheese.

“The turnout was even greater than we expected. With everyone hanging out and socializing throughout the evening, it really proved there’s an appetite for this type of event in the community and we plan to build on it for next year,” commented BAFA Vice-Chairman Bob Mohler, who is also Senior Vice-President of Digital Media for Telepictures/Warner Bros., father of two BUSD students and husband to a BUSD teacher. “The evening fit with our theme; it gave students, parents, friends, celebrities and professionals all a way to participate and contribute to the community. Frank Dietz, in particular, mentioned to me how proud he was to contribute to this effort. Overall, the evening was a big success for BAFA and our community.”

Additional volunteer help was provided by members of the National Charity League (NCL.) Two teenaged volunteers representing the NCL from Marymount High School on Sunset Blvd., Lelosa, age 15, and Ivieosa, age 14, were kept busy all evening wrapping up purchased art. The display board they were working was half-empty after only an hour into the show. Lelosa noted that all kinds of art were available, from pencil sketches, watercolor and photographs to acrylics, pastels, charcoal and other mediums.

“The Burbank Arts for All Foundation is thrilled with the success of our first ever Secret Art Show. The evening truly exceeded our wildest expectations,” said Trena Pitchford, Director of Development for BAFA. ” We are so grateful to all of our Secret Artists, our event committee, volunteers, sponsors and patrons who gave of themselves in order to give to our children. We still have a few secrets left to reveal, so stay tuned!”

For many of the student artists, this event marks their first art show and the first time their art has been sold. Proceeds from The Secret Art Show will fund art programs for children attending the Burbank Unified School District.