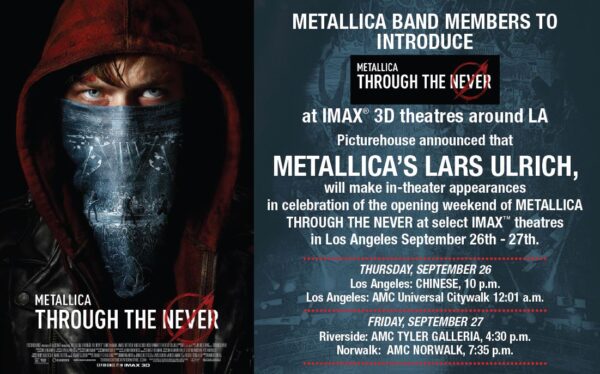 OK Metallica fans, you have been waiting for this film, now here it is.

In fact, for the opening, Lars Ulrich of Metallica will be at four theaters around LA making a special appearance prior to the start of the film.

Metallica Through the Never is a groundbreaking music-driven 3-D motion picture event.  The film combines a spectacular never-before-seen live-performance by Metallica created exclusively for the film and a suspenseful narrative to produce a bracing, raw and visceral cinematic experience.

Emerging young star Dane DeHaan (A Place Beyond the Pines, Kill Your Darlings, The Amazing Spider-Man 2 & 3) portrays Trip, a young roadie sent on an urgent mission that turns into a surreal adventure, while Metallica performs its most iconic songs during a roaring live set in front of a sold-out arena.

Metallica Through the Never features the most elaborate live-performance stage ever built and was filmed with state-of-the-art 3-D photography captured using up to 24 cameras simultaneously. Metallica, one of the most popular and influential rock bands in history, is James Hetfield (vocals, guitar), Lars Ulrich (drums), Kirk Hammett (guitar, background vocals) and Robert Trujillo (bass, background vocals).  The film is written and directed by award-winning filmmaker Nimród Antal (Predator, Kontroll) and produced by Charlotte Huggins (Journey to the Center of the Earth). Credits are not final.

The film will be released by Picturehouse in North America on September 27, 2013, exclusively in over 300 IMAX® 3D Theatres, and will expand into additional theaters on October 4, 2013.  The film is rated R.  Running time is 92 minutes.

Three myBurbank.com lucky winners will receive hats and tee shirts for just taking a picture or your ticket stub anytime this weekend and emailing it news@myburbank.com.  Winners will be selected next week.