Burbank police officers on the running team accepted the torch from the Los Angeles Police Department’s North Hollywood Division team in Toluca Lake at Riverside Dr.and Clybourn Ave around 12:50 in the afternoon.

Special Olympic athletes, with the assistance of the officers, carried the torch up Olive Ave. with a quick stop at NBC before proceeding up to San Fernando Blvd.  After making the left, they then proceeded up to the front of the Burbank Police Station.

There was a brief presentation ceremony on the steps of the station, before the runners continued with the torch on Glenoaks Blvd. to the city limits which ended at Big Mama’s and Papa’s Pizza at Alameda and Glenoaks.  The torch was then passed to the team from the Glendale Police Department.

In addition to the Torch Run, the Burbank Police Department is also be taking part in the “Tip-A-Cop” event on June 12, at the Black Angus Restaurant, 235 S. First St.  Between 5 and 9 p.m., department personnel will be serving as waiters and entertainment to raise

funds for the Special Olympics.  All of the funds raised will go to local athletes.  It helps pay for transportation, training, and equipping athletes of all ages who participate in the program for the developmentally disabled. 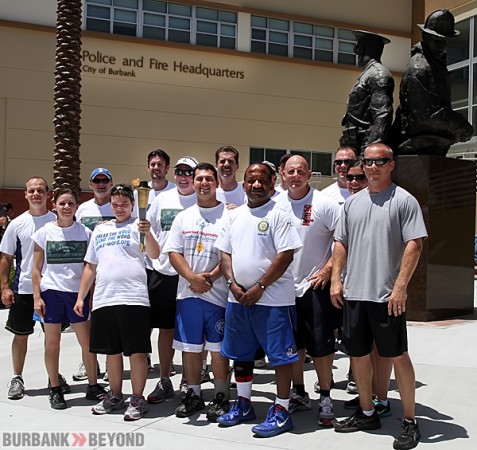