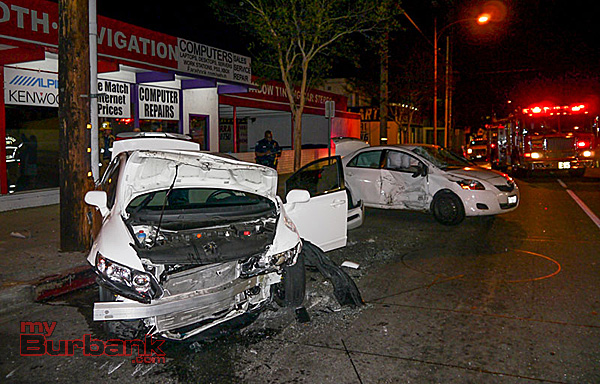 A traffic accident Thursday night around 10 p.m., at the intersection of Magnolia and Victory Boulevards severely damaged the two cars involved and injured one driver, but it could have been much worse.

The impact between a Honda Civic and a Toyota Yaris sent both cars spinning and sliding to the southeast corner of the intersection.  According Burbank Police at the scene, the Honda was heading east on Magnolia when the driver, who was unfamiliar with the area, apparently ran a red light.  She struck the Toyota, which was heading south on Victory, on the right side of the car.   The Toyota appeared to have slid on its left side before landing on all four wheels near the Honda.  The front and side airbags deployed in both cars.

The Honda came to rest with its rear wheels against a curb, with the right rear section of the car also striking a utility pole.  The impact broke a chunk out of the conduit that runs from the sidewalk up to the power lines overhead. Burbank Water & Power dispatched an employee from the Electrical Distribution section to access the damage. His initial inspection didn’t turn up any damage to the wires.

The driver was very lucky that the wires inside the conduit were not damaged, as the wires carry 4,000 volts of electricity.  Had the wires been broken, they could have shocked the driver or rescuers.

The wooden utility pole received only minor damage.  The electrical transmission lines at the top of the pole carry 69,000 volts.  Had the wire in the conduit been broken or the power lines overhead fallen, severe injuries or death could have resulted.

The Burbank Fire Department responded to the accident with an engine company and rescue ambulance.  The unidentified driver of the Toyota was transported to Providence St. Joseph Medical Center, after complaining of pain.   The driver of the Honda appeared to be uninjured and remained at the scene as police investigated the accident.