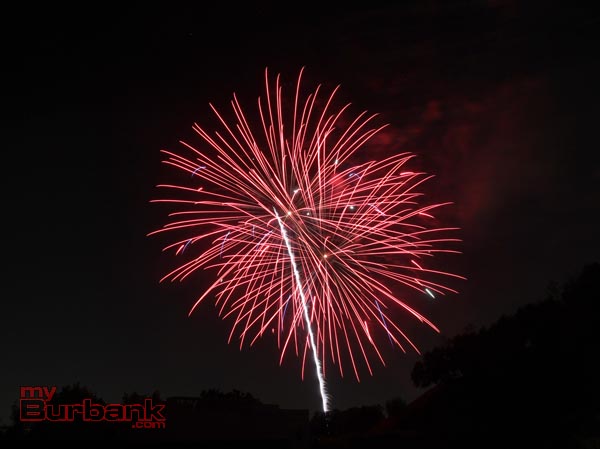 Burbank’s 2013 Summer Concert Series kicked off with its July 4th event at Starlight Bowl on Thursday.  Several thousand inside the Starlight Amphitheater enjoyed the music of High Street Band with a spectacular fireworks show that followed. Families picnicked on the grass area, while kids ran around to the music of yesteryear. Several thousand more lined the street below the Starlight Bowl to get a glimpse of the spectacular show.

Kenn Lewis the licensed Pyro technician who was responsible for the fireworks display said there were over 300 different cannons that will be ignited during the display, that would last 20 minutes. The Burbank Fire Department had Fire Inspectors oversee his installation along with the firing of the fireworks. For fire prevention The Los Angeles City Fire Department had 2 water dropping helicopters staged and standing by on the Mesa that overlooks the Starlight Bowl parking lots. There were no spot fires following Burbank’s Fireworks show, and no injuries reported from the events at the Starlight Bowl or from fireworks in the city.

Ladies and Gents Night In