Three people had to be transported to the hospital by ambulance Sunday night shortly before 11 p.m., after two cars collided at the intersection of Burbank Blvd. and Mariposa St. 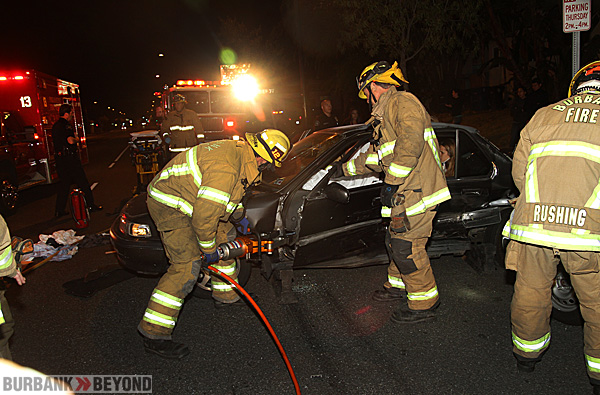 Burbank Firefighters used ‘The Jaws Of Life’ to extricate a driver and a passenger from this Honda involved in an accident on Burbank Blvd. and Mariposa Street Sunday evening. (Photo by Ross A. Benson)

According to police officers at the scene, four young women in a 1991 Honda Accord were northbound on Mariposa, when they attempted to turn left onto westbound Burbank Blvd.  A female driver in a newer BMW was eastbound on Burbank Blvd. in the number 2 lane, when her car struck the left side of the Honda, caving in the driver’s and passenger doors.  The front and rear passengers sitting on the right side of the Honda were able to get out of the car.  Although shaken, they did not appear to be injured.

The driver and passenger in the left rear seat of the Honda had to be extricated by firefighters, who used the “jaws of life” to remove the doors of the already badly damaged car.  The other two young women in the Honda were able to get out on their own.  The driver of the other car appeared to have an injured arm.  All three victims were transported by rescue ambulance to Providence St. Joseph Medical Center. 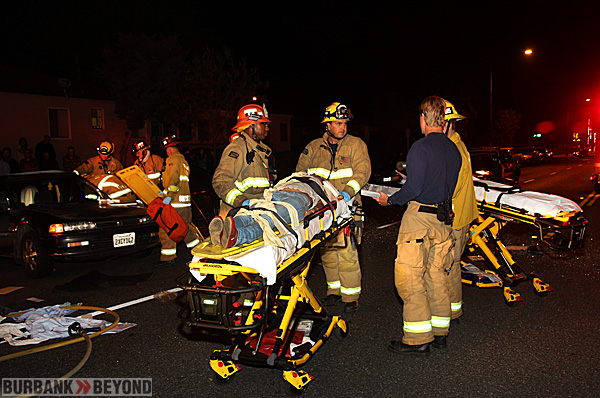 Burbank Firefighters & Paramedics prepare one patient for transport to a local hospital following a accident at Burbank Blvd. and Mariposa St. (Photo by Ross A. Benson)

The BMW appeared to have sustained moderate damage to the front end of the car.  The Honda Accord, with it’s now missing doors, broken and missing rear window appeared to be a total loss.   School books, papers, and glass from the shattered rear window were scattered across most of the lanes of Burbank Blvd.   A parked car next to where the Honda came to rest, apparently escaped being damaged.   The accident remains under investigation. 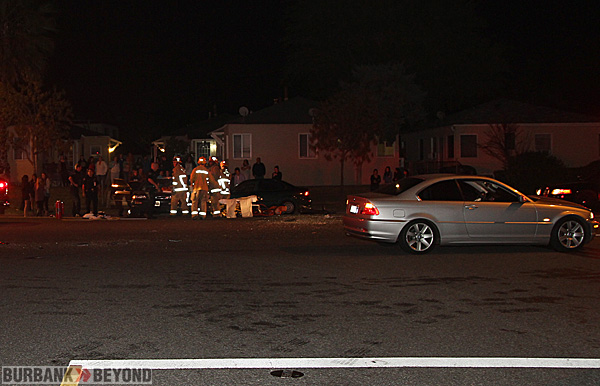