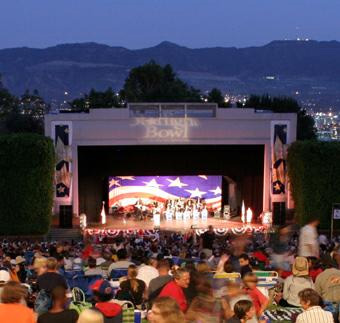 Burbank’s Starlight Bowl will be the location for the annual Haunted Adventure that will offer a fun and slightly scary Halloween adventure for local residents.

Sponsored by the City of Burbank’s Stough Canyon Nature Center, the Haunted Adventure is in its 16th year.  Originally, it was put on the City’s Parks and Recreation Department at the Luau Grounds at the DeBell Golf Course.   When the Nature Center was built in 2001 the event was moved there.  It is now put on by docents and other volunteers from the Nature Center.

This year the Starlight Bowl will be transformed into an “old haunted theater,” with scary scenes around every corner.  As small groups of guests are ushered from Stough Park into the Starlight Bowl, they will encounter traditional scary scenes in the snack bar area, dressing rooms, storage rooms, and the stage.  A “ghostly audience” may even greet them as they make their way through the 15-minute guided tour.

Carol Mercado, Recreation Supervisor in charge of the Nature Center estimates that 70 volunteers have been working since August to put together the show.  High school students, and some adults, make up the ghostly and sometimes grisly cast of the Haunted Adventure.  They do it for fun, but the volunteers do get fed each night, thanks to Domino’s Pizza and the Handy Market.

Last year’s Haunted Adventure featured a scary tour of Burbank in honor of the City’s Centennial celebration.  Independent Studio Services has generously donated movie props each year.  Many of the props are saved and used over again each year.  The volunteers have cleverly altered them to fit this year’s theme.

The Haunted Adventure will be held two nights only, Friday and Saturday, October 19 and 20.  Admission is $5 per person, and tickets go on sale at Stough Park at 7 p.m. until 9 p.m.  Ample free parking is available in the large lot across the street from the park on Lockheed View Drive.  The park can be reached by driving up Walnut Ave.

Those attending must be at least 6 years old.  Because of the scary nature of the event, no child under 6 will be allowed.  Children 12 and under must be accompanied by an adult.  The first hour on Friday evening will feature the “less-scary” version of the show for children and those who have nightmares.  However, there are no refunds for scared visitors.  Costumes worn by visitors and props are prohibited, in order to keep visitors from being confused with actors.   Flashlights are also prohibited on the tour.   Walking up hill, and walking up and down stairs is involved on the tour.

Refreshments will be sold in Stough Park, as well as face painting, children’s activities, and souvenirs will be offered. There is a fee for refreshments and souvenirs.   For more information about the Haunted Adventure, call 818-238-5440.

Adoptable Pet of the Week: Amy

Time to Discard your Live Christmas Trees with Options Available

Burbank Park & Rec. is Looking for Someone to Manage and Operate its Theatre Facility