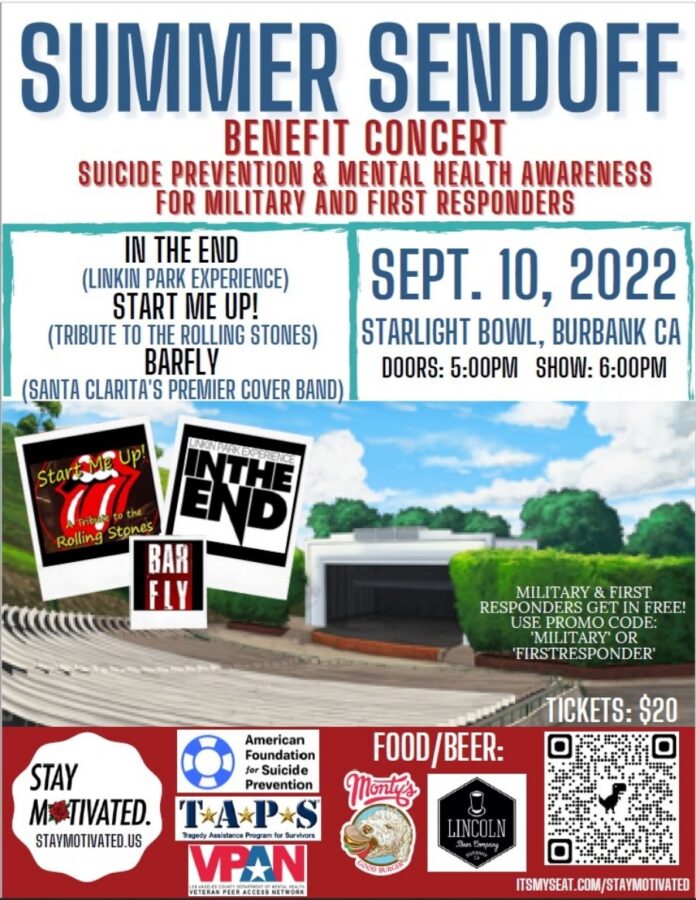 Stay Motivated. – a non-profit organization geared towards raising awareness for suicide prevention and mental health advocacy for military and first responders – is hosting a Summer Sendoff Benefit Concert on September 10th, 2022, at the Starlight Bowl in Burbank.

It was an average September day in 2018 when Dominick Solley, Burbank resident and Co-Founder of Stay Motivated., received a knock on his door from two military personnel letting him know his younger brother, Jake Solley, had died by suicide. Jake, who was training in Pensacola, FL, to become an EOD technician in the Marines, took his own life at just twenty three-years-old.

“In hindsight, I just wish that I would have put more effort into having meaningful conversations with him about his mental health,” Dominick said. “I just never thought he was someone who would do something like that. We wish we knew more about the signs of suicide back when he was alive.”.”

It was with that in mind, alongside Jake’s memory, that Dominick and his wife, Aly, decided to start to Stay Motivated. They learned that according to the USO, in 2021, over 30,000 “active duty personnel and veterans who served in the military since 9/11 have died by suicide.” Comparatively, in those same twenty years, a little more than 7,000 service members had been killed in combat. It’s a shocking difference – nearly 400% more service members die by suicide than during combat, and roughly twenty-two service members a day lose their lives to suicide.

The goal of Stay Motivated is simple – raise awareness for suicide prevention among first responders and military personnel by giving them and their families an outlet to share, or not share, feelings that they may have experienced while in the line of duty.

By supporting legislative efforts that cater to veteran and first responder mental health, sharing currently available mental health resources, encouraging conversation, and promoting physical activity, creativity, and self-expression through music, Dominick and the Stay Motivated. the team believes that they can help others struggling with depression, PTSD, and other mental health ailments that disproportionately impact military and first responders.

The Summer Send-Off Benefit Concert on September 10th at the Starlight Bowl is an opportunity to put their plans into action. Tickets are $20 each, and military and first responders get in FREE. Three bands will grace the stage (In The End (A Linkin Park Experience), Start Me Up! (Rolling Stones Tribute Band), and Barfly, Santa Clarita’s Premier Cover Band) for an evening of music and togetherness, all in the name of supporting our military and first responders, in remembrance of Jake, and those who have and those who will lose their life to suicide.

“The military makes you tough,” Dominick said. “My favorite memory with him is just spending time together, dropping our egos and just talking. Without our guards up.” That’s what Dominick wants for others like Jake – the understanding that it’s okay to talk about how you’re feeling, to soften your exterior. In fact, it may just save your life.

Tickets for the Summer Send-Off can be purchased at: https://www.itsmyseat.com/staymotivated