Call it fate or coincidence.

But, whatever it was that brought a University of Miami graduate to Los Angeles and turned him into an award winning film director and classically trained opera singer was probably a mix of both.

Born to Italian parents, Nunzio Fazio said that during college, his goals were more about law school and business, and less about acting and film-making.”It was kind of like well, I just stumbled into this,” Fazio said in his soft spoken voice and gleaming white smile.

So, how did it happen?

“Well, during my sophomore year in college I was in a band and thought it’d be a good idea to get us some gigs touring the country,” he said.  His vision however, didn’t go as planned. “Two of the guys didn’t wanna go because they were married,” he said.

Somewhat disappointed, Fazio said he decided not to let it bring him down. “There were auditions for a few theatrical plays, I was taking improv classes and figured- why not?”

To his surprise, Fazio was not just cast for one, but each and every play he auditioned for. He realized he had discovered a love for theatre and ultimately changed his major to acting. During this same time, Fazio somehow managed to cross paths with an esteemed vocal artist named Gina Maretta.

Maretta had a track record of being one of the best. Her student clientele included everyone from: Latin pop sensation, Gloria Estefan to Journey front man, Steve Perry.  Fazio soon became a part of that list and began training with Maretta. He said she taught him everything there was to know about singing classical Opera.

He calls this experience one of the most extraordinary gifts he received. “She taught me so much, I mean how to get through a concert and how to sing when you are too tired,” he said. “Those are some techniques I learned and will cherish about Gina forever.” 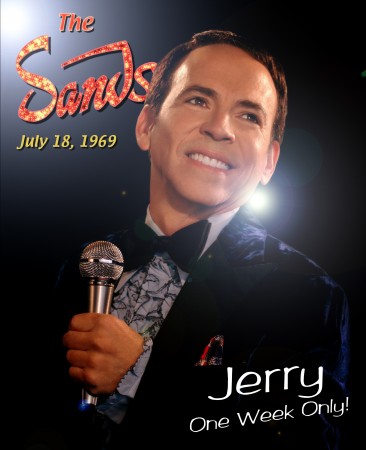 Nunzio Fazio playing Jerry at the Sands Hotel for the film Millie and Jerry.   (Photo Contributed)

After graduating from the University of Miami, Fazio said his life changed yet again. “I took a test, got into the Director’s Guild,” he said. “That was my ticket out of Miami and I took it.”

Fifteen years later, Fazio still calls Los Angeles home. He has directed a number of films including the award winning: “Kenmore Ave” and “From the Midst of Pain.” He has produced several others including “Kissing Strangers” and the ABC specials:  “Alice Through the Looking Glass” and “Sleeping Beauty.”  His films have played at the Cannes, Sundance and Toronto film festivals.  Fazio has won several awards including: Best Director, Best Documentary and Best Social Commentary.

His vocal talent has been compared to that of the ‘Three Tenors’ and he said he is greatly inspired by the 1920’s opera great, Enrico Caruso.  “It is such a great feeling when your talent gets recognized,” he said. “I enjoy singing so much.”

Fazio is currently working a project called, Lone Star Hit Men,  “It’s kind of like Goodfellas in Texas,” he said.He said he loves making movies and singing opera. For him, moving to Los Angeles was a risk, but he is glad he took it.

You just really have to do it,” he said. “Take the gamble and leave home, whether to Los Angeles or New York.  Go somewhere where, whatever it is you want to do, is the normal way of life.”