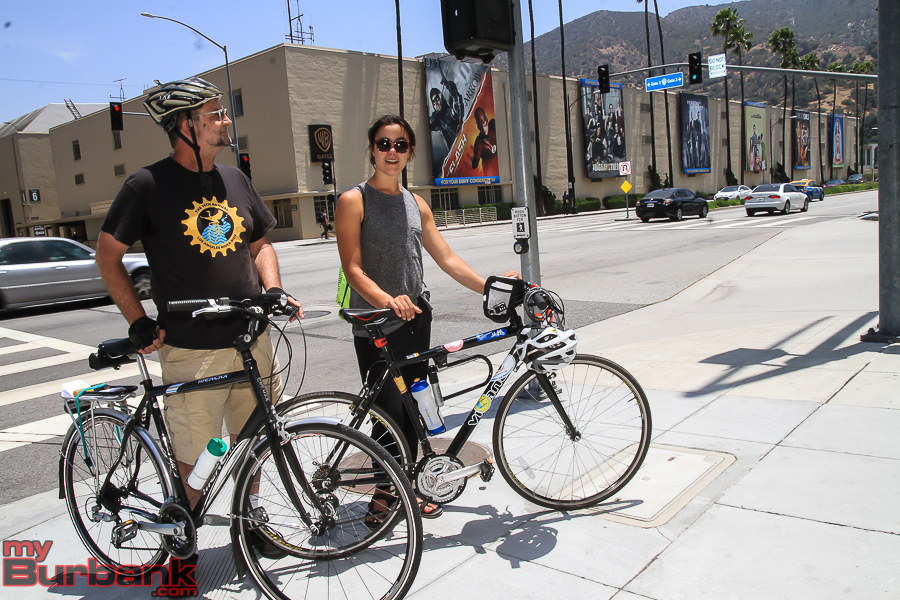 New York, Chicago, Denver, Minneapolis and Portland. These are just a few of the destination cities for Elena Studier as she and her bicycle travel the country by rail. This past Tuesday, she added Burbank to the itinerary, making it her first choice for a Southern California bicycle destination. Through a summer internship, college sophomore Elena Studier, along with her bike named Stevie, are on a multi-modal journey across the country.

Elena, a Washington D.C. student, arrived in Burbank on Tuesday by train, marking the official beginning of the Southern California portion of her epic 38-day “road trip” bike/rail adventure across the country.
“Summer by Rail,” is the city to city voyage she is undertaking as a blogging bike rider traveling by rail, and as a Summer Intern with the National Association of Rail Passengers, a Washington D.C. advocacy group working for increased inter-city rail networks, service and route choices.
Elena plans to visit 18 cities and 15 states, emphasizing transportation alternatives by focusing on bike, ferry, rail and bus modes of travel throughout her entire journey.

Hoping to complete a full 10-12 miles of bike riding while touring as many local Burbank sites and locations as possible in a day, Elena arrived promptly at 10 am on Metrolink’s train #107 along with her bike. Prior to taking Metrolink to Burbank, she had just arrived that morning at Los Angeles Union Station on Amtrak’s Southwest Chief, after having boarded it the evening before in Flagstaff, Arizona.
“Burbank’s many unique points of interest along with its Amtrak, Metrolink and Metro rail service connections, made it easily my first choice-destination for an unforgettable Southern California rail and bicycle adventure,” she said as she was greeted by Burbank Councilmember Bob Frutos, City transportation planning staff and Walk Bike Burbank members who had all assembled for her arrival at the Downtown Burbank train station.

Joining her on her Burbank bike tour was Patrick Dickson, City of Burbank Transportation Commission member and founding member of Walk Bike Burbank, a local pedestrian and bicycle transportation advocacy group. “We share in Elena’s vision of a multimodal lifestyle where people want to live in cities with an interconnected system of bikeways and pedestrian paths. Demonstrating how these amenities can influence traffic movements and increase the quality of life for Burbank residents is important for everyone to see,” Dickson explains.
Studier, a student focusing on transportation and urban environments while working towards an undergraduate degree in International Affairs and Human Geography said her first Burbank bike-tourist stop must be the nearby Nickelodeon Studios, explaining she grew up with Sponge Bob Square Pants and wanted to see where he actually lives in Burbank!

From the Nickelodeon studios, her bike journey resumed with a short trek over to Burbank’s premier bicycle manufacturer, Pure Cycles – creator of the now-classic Pure Fix single-speed urban bicycles, and other internationally popular lines of city transportation and cruiser bicycles. Founding partner, Michael Fishman met up with Elena next to the Chandler Bike Path where Pure Cycle’s World Headquarters is located, giving her a first-hand guided tour. Elena noted the Burbank bike brand’s growing national popularity, commenting on the many colorful Pure Fix bikes she noticed all over Chicago during her recent visit there.

Back on Chandler Bike Path, Elena’s journey continued over to Keystone Avenue where she intercepted the designated Class III bike route leading directly to the Walt Disney Studios. On her way there, a brief detour on Olive Avenue was in order for a de rigor photo in front of the 1950s era Safari Inn Motel sign. Vividly displayed in Burbank for decades, this sign is a recognizable icon harkening back to past eras and has been featured in many movies and popular TV shows over the years.
Arriving at the front Disney gate gave a spectacular view of the Seven Dwarfs on the Michael Graves-designed headquarters building. From there, she began a unique and enjoyable little bike journey around the Disney Studios that revealed many Disney Channel star’s TV homes – all located in that special little “Disney” Burbank neighborhood adjacent the studios – and all locally accessible by any intrepid Burbank bicyclist.

From the Disney Studios lot, Elena jaunted down the Riverside Drive bike lanes, viewing the Disney Animation building and ABC Television Network’s West Coast headquarters, and then over to Warner Avenue, taking in the areas surrounding Warner Brothers’ Studio gates – complete with unique bicycle-perspective sound stage viewing areas and angles.
Walking further down Olive Avenue, she paused for pictures in front of the famous WB billboards and the Ellen Show sound stage. True to expectations, a well-known celebrity who dances with the stars raced by at that very moment in his shiny sports car – reinforcing Burbank’s unique moniker, “Media Capital of the World!”
Shoving off from the front of Warner’s Gate 4, with the postcard view of their recognizable water tower in the background, Elena made her way by a necessary combination of walking and biking over to California Avenue, and on up to Magnolia Avenue where she was met by City of Burbank Community Development transportation planners Beverly Wong and Hannah Woo – pausing for a light lunch and refreshments at bicycle-friendly Romancing the Bean Coffee Shop on Magnolia Avenue.
Bike Friendly businesses all provide bicycle-parking and other considerations. Elena explained that many cities and districts are exchanging one on-street parking spot with a “bike corral.” A bike corral is a physical on-street parking barrier replacing a space of one car to create increased parking for ten or more customers’ bicycles. This practice has proven effective in increasing business in many areas similar to Magnolia Park.
After enjoying a break and refreshments, Elena’s journey circled around the nearby voice recording studios used for many current popular animated shows, and the Magnolia Avenue musical recording studio of her bike’s namesake, “Stevie.”
Concluding her Burbank bike tour, Elena was accompanied on the Chandler Bike Path to the North Hollywood Metro Red Line station for her trip back to Los Angeles Union Station. The next day she had a ticket on Amtrak’s Texas Eagle. Destination: Austin, Texas – and the rest of the country!
Her Southern California journey was nearing its completion as Elena explained, “Millions of American’s think that public transportation is only for major metropolitan areas, I want to show how easy it is to travel from coast to coast, to hit the city or hike in a national park.”
Elena’s visit to Burbank shows us that with the many local Amtrak, Metrolink and Metro Rail choices all conveniently accessible by bicycle makes Burbank a connected small town, and a great national tourist destination. Her Burbank visit also reminded us again how easy it is to see the most interesting local sites from a bicycle!