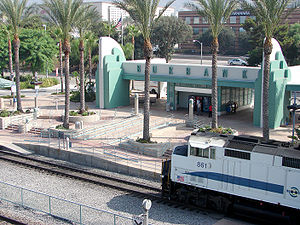 A briefcase left next to a trash can at the Burbank Metrolink Station on Thursday morning, caused a bomb scare.

Police responded to the station, located at 5 W. Olive Ave., at 7:40 a.m..  They found a hard plastic type case with metal latches.  It was sitting on end with the handle forward, placed between the trash can and a concrete wall at the station.

All incoming trains were stopped and held away from the station.   Officers blocked all vehicle and pedestrian taffic nearby, and evacuated the station and surrounding area.  A unified command post for both police and fire  units was established about 200 yards south of Olive Ave., on Flower St.

The Los Angeles County Sheriff’s Bomb Squard was called, and arrived on scene at 8:20 a.m.   A “bomb dog” and its handler assessed the situation, determining that the empty briefcase was not a threat at 8:30 a.m.   The train station was reopened, and traffic was restored  a short time later.

How to Prevent a Christmas Tree Fire