For the second straight game, the Burroughs High football team allowed 50 points, but in Friday’s encounter versus Canyon at Memorial Field, the Indians looked much better after mustering three touchdowns in a 50-21 setback in a nonleague match. 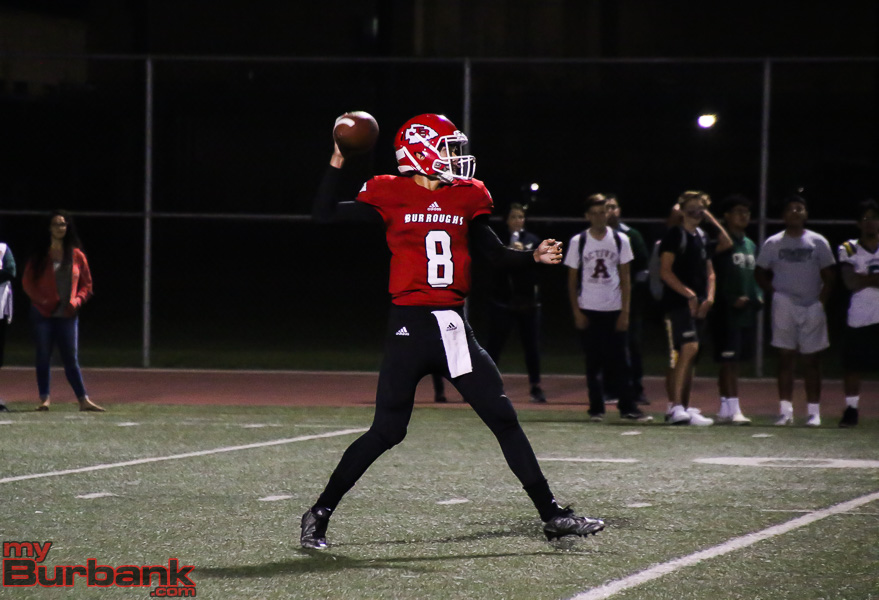 Senior quarterback Nathan Piper had a one-yard scoring run against Canyon. (Photo by Ross A. Benson)

Piper’s score, which capped a 19-play, 78-yard drive, was the first points for the Indians, who were blanked on the road against West Ranch, 54-0, in the season opener.

Junior Aiden Forrester picked off a pass and returned the ball 83 yards that cut Canyon’s lead to 29-14 with 6:53 left in the fourth quarter.

When Forrester, who has extraordinary speed and quickness, ran back the kickoff 97 yards, it shaved Canyon’s edge to 43-21 with 2:35 showing.

“Special teams was great,” Burroughs first-year coach Rand Holdren said. “The effort is what’s important that we can take away. We had a rough outing last week. This week we really focused on working to finish and sell out.”

Holdren liked the effort. “These kids are learning. They fought together,” he said. “These boys acting like a team. Being proud to be out here. I’m proud of them.”

Sophomore running back Luke Rogers garnered a team-best 48 yards on 17 carries for the Indians (0-2). 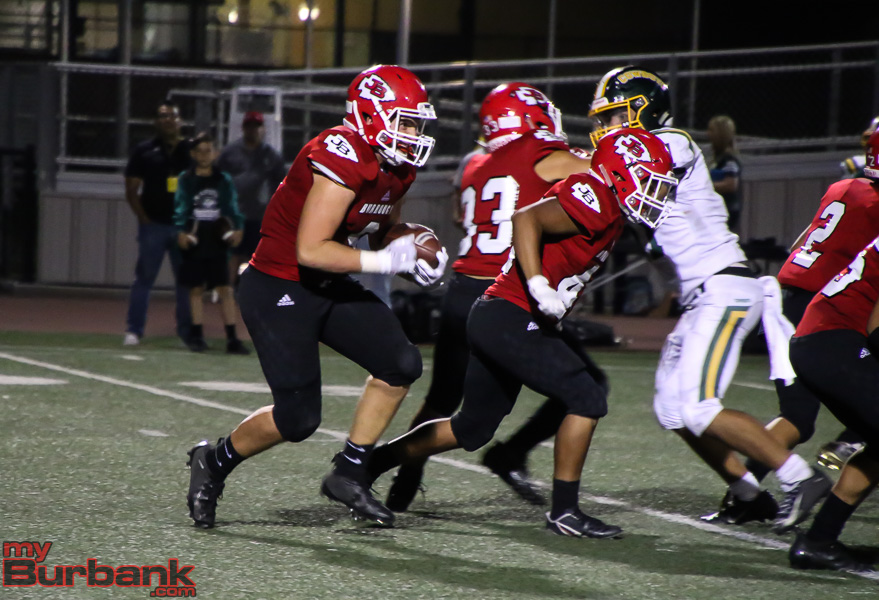 Yardage on the ground was hard to come by for the Indians. (Photo by Ross A. Benson)

The Cowboys (1-1) jumped out to an early lead and never looked back as junior quarterback Aydyn Litz tossed three scoring passes in the first half.

Canyon took a 7-0 lead with 10:09 on the clock when Litz tossed a lateral to senior running back Shawn Gallagher, who unloaded a 50-yard laser to junior wide receiver Aiden Corcoran.

After a mixup in the Indians’ backfield that resulted in a safety with 1:16 left in the opening frame, the Cowboys were ahead 9-0.

With 1:45 left before the break, Litz connected with senior wide receiver Carson Strickland (66 yards on two catches) on a 60-yard toss that gave the Cowboys a 22-7 edge. 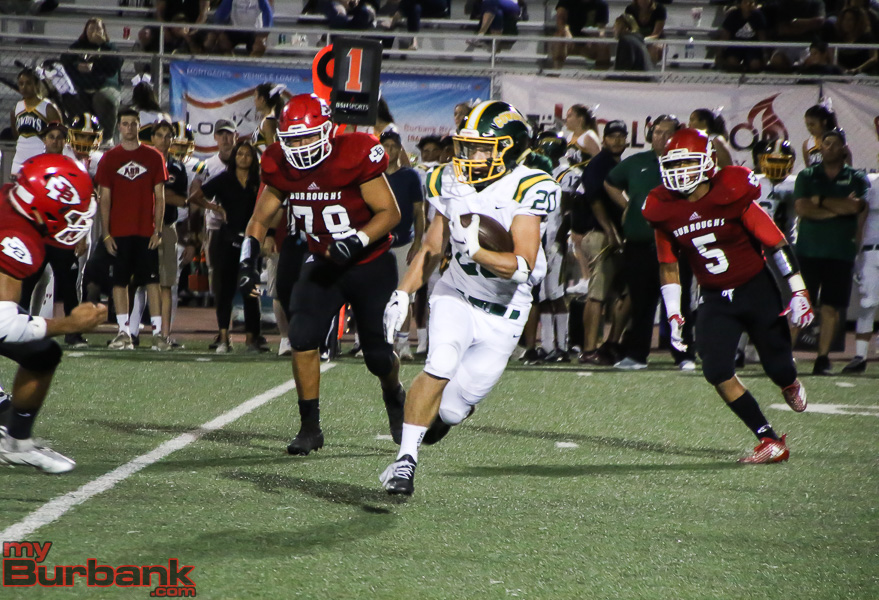 Canyon ran and threw the ball effectively in a 50-21 win. (Photo by Ross A. Benson)

Litz capped off the first-half scoring with a 10-yard strike to sophomore wide receiver James Mendibles (23 yards on two receptions) with 25.1 seconds left as Canyon pushed the lead to 29-7.

When Litz crossed the goal line from a yard out with 2:50 showing in the game it became 43-14.

Senior running back Caleb Magno found the end zone on a 10-yard sprint that ended the scoring with 1:14 left and made it a 29-point differential for the Indians (96 total yards).

Burroughs’ next game will be Thursday against Harvard-Westlake when it hosts the Wolverines with a 7 p.m. kickoff. 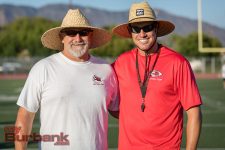 Nathan Piper’s intentions before the Burroughs High football game at Glendale High Thursday night were simply to help lead his team to victory.

Piper did that and a lot more as the Indians defeated the Nitros 81-14 in a Pacific League contest.

The junior quarterback completed 28 of 32 passes for a school record 430 yards and four touchdown passes. The previous record was set by future University of Washington quarterback J.K. Scott in 1996, who threw for 418 yards in a playoff game against Dominguez High of Compton.

“I didn’t know I had the record. After the first drive in the third quarter I got pulled out,” said Piper, who also had a rushing touchdown. “That’s when coach said he had good news and bad news for me and that I’d be coming out.” 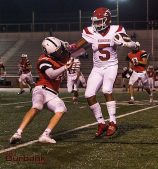 “Nathan will be the first to tell you that it’s a team effort,” Burroughs coach Mike Reily said.

Burroughs got four rushing touchdowns from Ben Peters, who finished with nine carries and 114 yards.

Cerain Baker had 11 receptions for 233 yards and three touchdowns.

Burroughs backup quarterback Andrew English even got involved in the action and scored two rushing touchdowns. He finished with 40 yards in four carries.

Sophomore Aiden Forrester returned a fumble 25 yards for a touchdown following a kickoff.

David Lennstrom had a 37-yard touchdown reception from Piper.

The Indians led 28-0 at the end of the first quarter and 49-0 at halftime. The third quarter was not played with a running clock, as is customary when teams trail by 35 or more points at the intermission.

“We have a big football game next week against Crescenta Valley,” he said. “We’re going to celebrate this one for the next 10 or 12 hours or so and then watch some film and get ready for next week.”

Cerain Baker tries to get through Glendale’s defense. (Photo By Salvador Cabezas)

Ben Peters on his way to the end zone.(Photo By Salvador Cabezas)

For at least one half, the Burroughs High football team seemed to be in control of Friday night’s Pacific League match at Arcadia.

Then it went south somewhat in the second half as the Indians were outscored 17-3 and lost 31-26.

Even so, Burroughs (319 total net yards) still had an opportunity to rally on its final possession, but Arcadia’s defense stiffened on fourth and two from the Apache 16-yard line after stopping senior wide receiver David Lennstrom on a sweep for a six-yard loss. 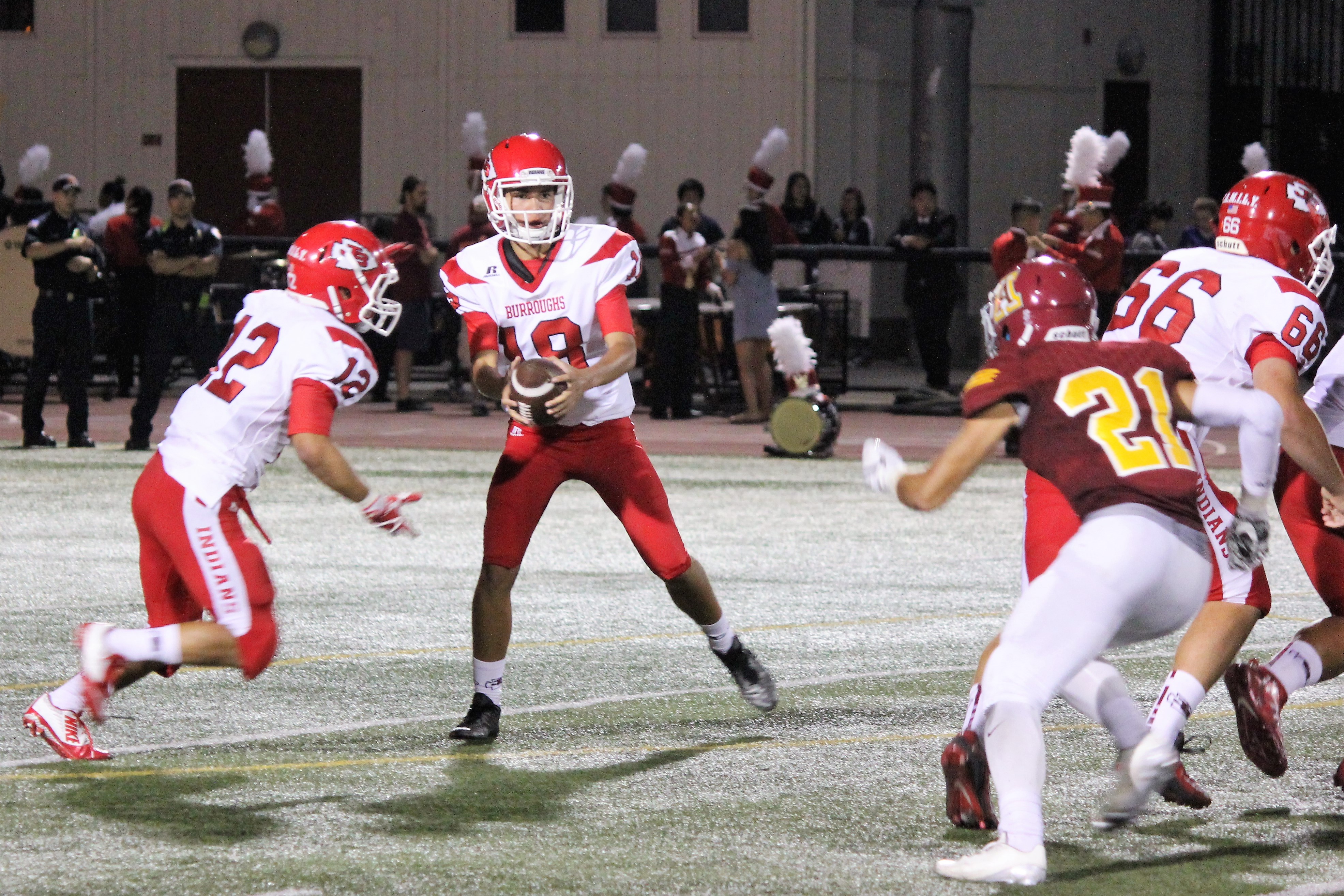 Burroughs quarterback Nathan Piper is about to hand the ball to Ben Peters, who had 180 yards on 40 carries. (Photo courtesy Stephen Garden)

“A lot of it had to do with us making the proverbial shooting ourselves in the foot,” Burroughs coach Mike Reily said. “Their D line is a very active bunch and I think their defensive line played a more physical game in the second half than they did in the first half.”

Reily went on: “They gave us some fits more in that second half than they did in the first half,” he noted. “I don’t think it’s anything scheme-wise that they had done differently. It’s just us making a mistake here and there which just adds up to lost opportunities and lost points and then stalled drives.”

The potential winning drive began at the Indians 13-yard line and saw senior running back Ben Peters carry the ball 10 times for 45 yards. 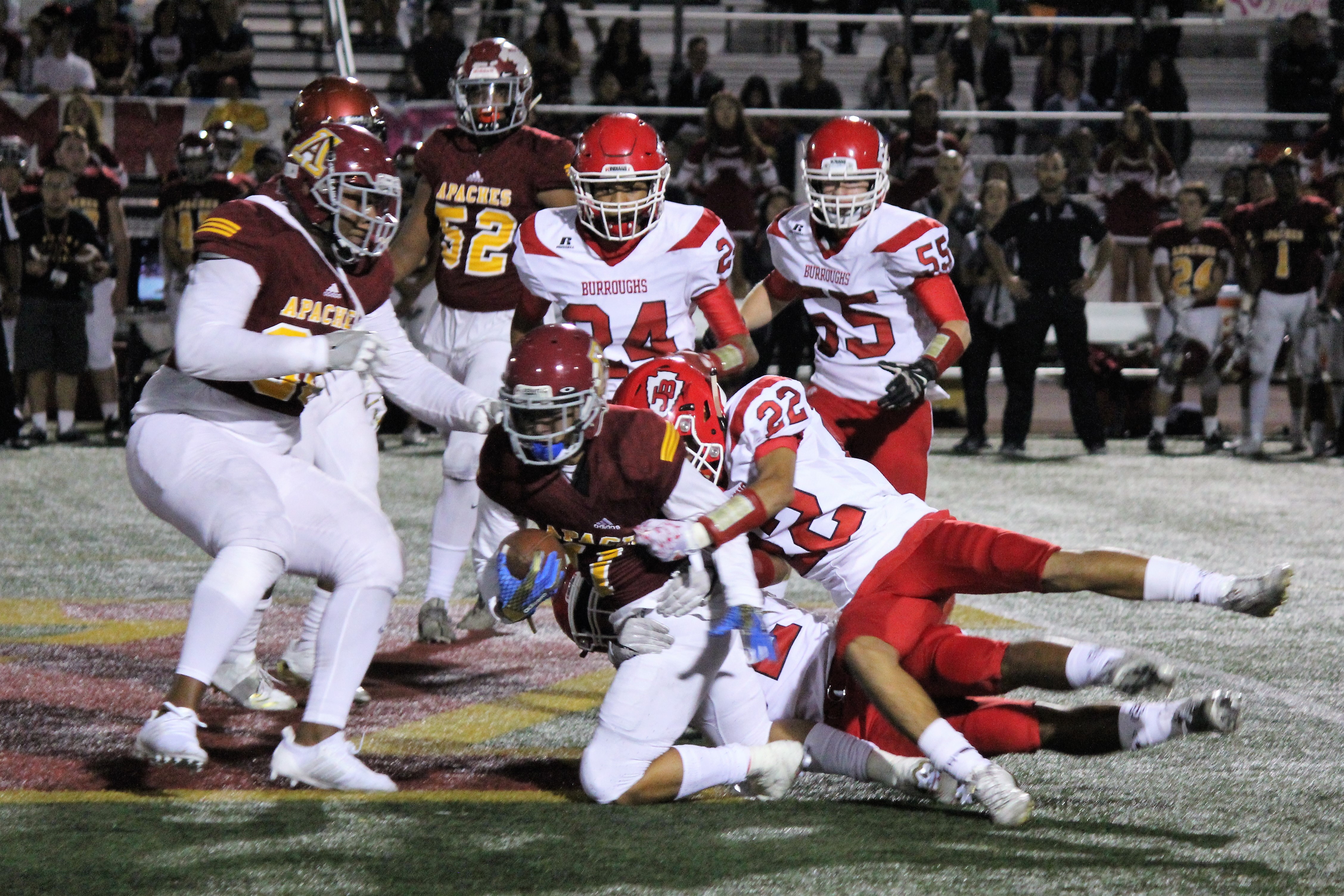 “Defensively we made some adjustments and we were able to slow them down a little bit,” Arcadia coach Andrew Policky said of the second half. “They’re tough, physical up front and they run the ball. We made enough plays to get it done.”

The scoring began on the opening series as Burroughs (2-2 and 1-1 in league) used eight plays that covered 62 yards and was capped off when junior quarterback Nathan Piper (18 of 36 for 146 yards) hit senior wide receiver Cerian Baker (team-high 67 yards on five receptions) with a 23-yard strike and 9:13 left in the first quarter for a 7-0 edge.

On Arcadia’s initial series, it was forced to punt which set up the Indians at the Apache 45-yard line.

It took nine plays to make it 10-0 after senior Jonathan Rivas split the uprights on a 33-yard field goal as 3:16 remained in the first period. 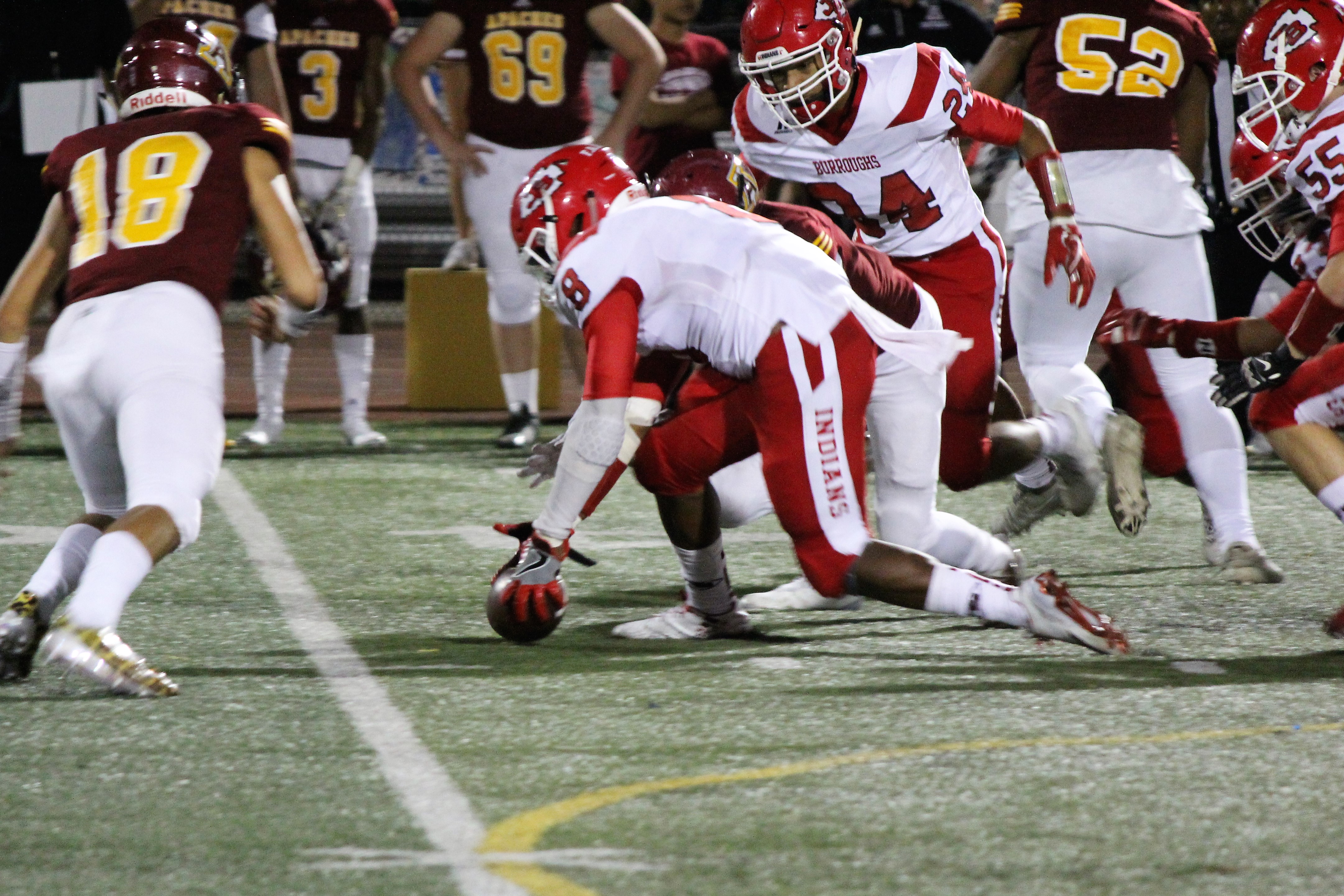 With 2:54 left in the same frame, Arcadia (3-2 and 2-0 in league) trimmed the lead to 10-7 on senior quarterback Max Davila’s seven-yard toss to junior tight end Jake Medders.

The Indians made it 16-7 on the ensuing kickoff when sophomore running back Aiden Forrester brought the football back 90 yards.

The Indians darted ahead 23-7 with 9:24 left on the clock in the second quarter when Peters, who ended his night with 41 carries for 190 yards, scored on a two-yard run.

Arcadia shaved the lead to 23-14 when junior wide receiver Rolandiss Whitener returned a punt 58 yards with 5:03 left before the intermission.

“Rolandiss made some big plays for us tonight,” said Policky, who also coached Hoover for two seasons. “Punt for a touchdown. The home run on the slant route for a touchdown. Made a ridiculous circus catch down there on the last drive to get us that last field goal. Unbelievable individual effort by him.”

Arcadia stormed ahead 28-23 when senior running back Andre Lewis (35 yards on nine carries) dotted the end zone on a 17-yard burst with 8:28 showing in the third period.

Burroughs will have a Pacific League contest at Glendale’s Moyse Field on Thursday with a 7 p.m. kickoff.