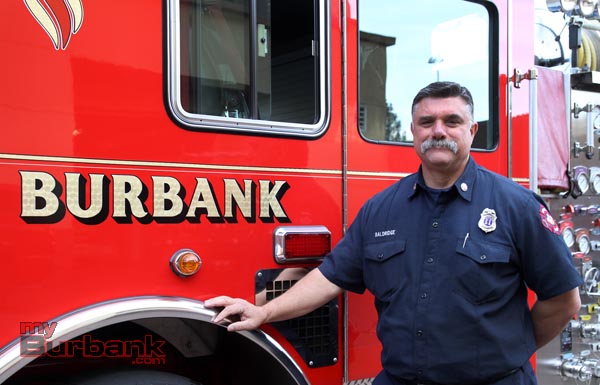 “Captain Jim Baldridge has always been a conscientious employee who could be counted on to get things done,” commented Capt. Peter Hendrickson, the BFD Public Information Officer. “(He) is driven by the betterment of the organization and his passion for the fire service.”

Baldridge’s commitment to preserving the Fire Department’s history manifests in several ways. He leads the department’s Centennial Historical Book Committee, a group of volunteers who have been collecting information and photos and putting them together in a chronological history of the Burbank Fire service. Hendrickson noted the department is anxiously awaiting completion of the historical book.

Baldridge has been an active member in the recent restoration of the BFD Muster Club’s antique fire apparatus. He also assisted on work at Jay Leno’s “Big Dog Garage” and put in several hours of mechanical work and polishing of equipment at Fire Station 13. 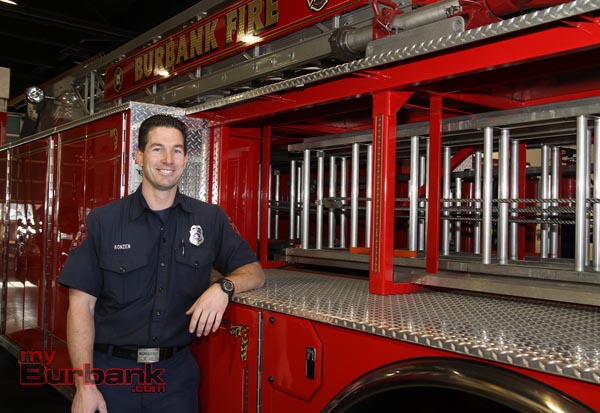 “Firefighter Konzen maintains the knowledge necessary to keep our department at the forefront of the annual TICP frequency changes, spending countless hours programming the department’s Bendix King (BK) VHF radios and providing training to the membership,” stated Hendrickson. “Often, Konzen can be seen late into the night, on his own time, at one of the stations programming BKs to ensure compliance.”

Konzen assists the Communications Division by researching radios and communications equipment and actively participating as a member of the Verdugo Radio Committee. He also maintains his contacts with the Forest Service that are very beneficial to the Burbank Fire Department; in June 2013, Konzen assisted in the design and acted as a dispatcher on a multi-agency drill. His involvement received a special thanks from the U.S. Forest Service. 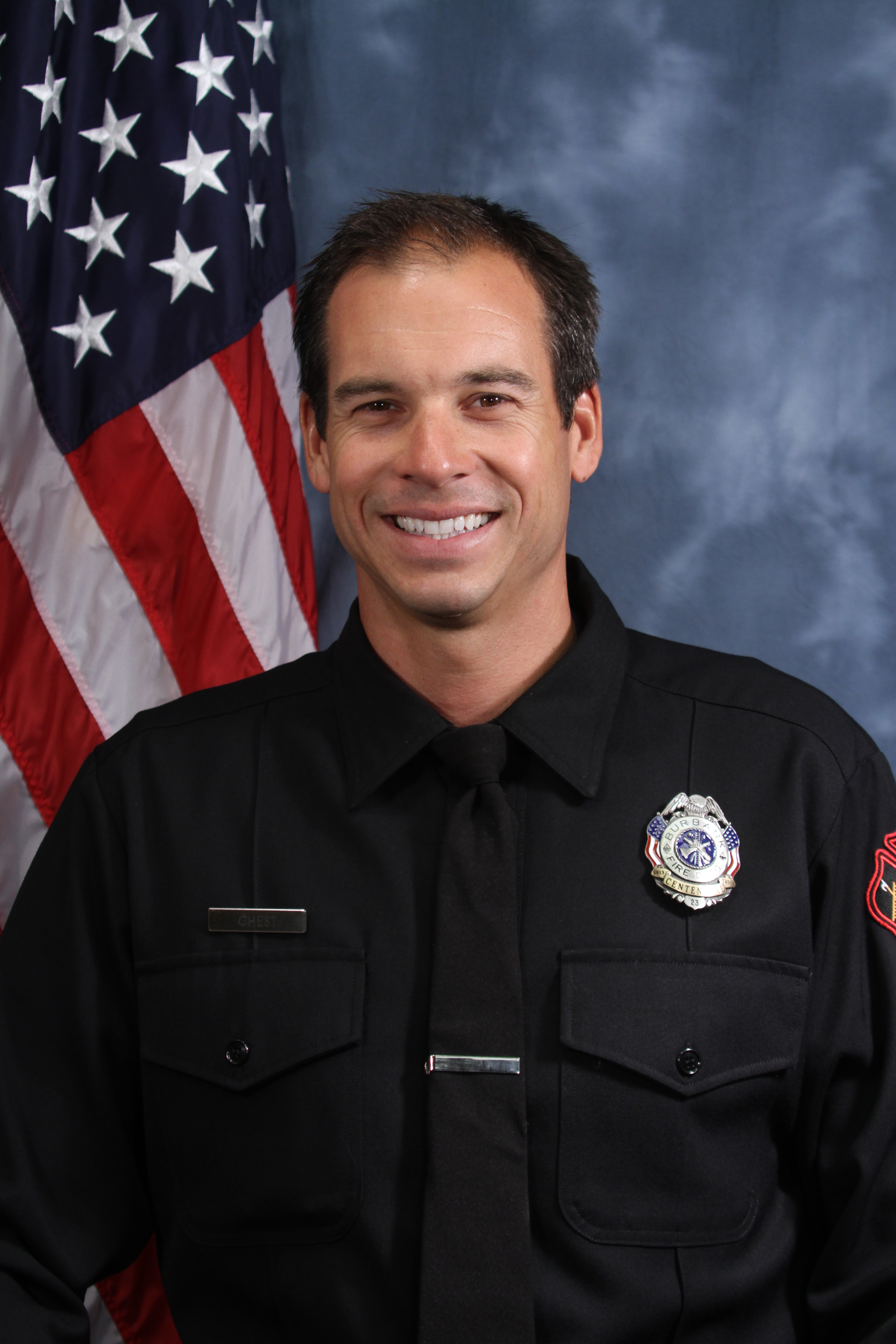 Chest was recognized for both his excellent work and his ability to see a need within the department and take is upon himself to fill it. He has been working on a program for the BFD to have fire line medics out in the brush fire environment and he assisted the Emergency Medical Services Division with the research and purchase of two defibrillators for this program. Additionally, Chest is an EMT instructor for the B shift.

“He is also training to be a Crew Boss leader for the Monarchs hand crew,” added Hendrickson. “This has been a great program the department has supported for many years and Firefighter Chest is helping it out by becoming trained and certified to take out the crew.”

Chest also has been the first individual to finish online training and be certified for minor repairs for the turnout repair program. Turnouts are firefighters’ brightly colored protective suits. Chest’s ability to make minor repairs to turnouts and return them to service immediately saves the department money and weeks of waiting. 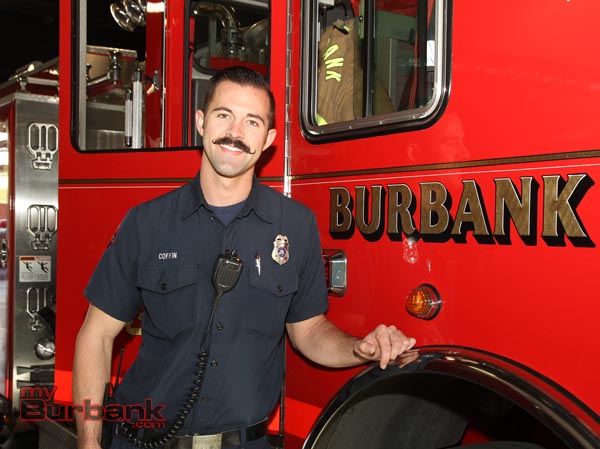 “Firefighter Grant Coffin has done an outstanding job as a Firefighter/Hazmat Specialist assigned to Fire Station 12A this last year. His work while on emergencies, while training and around the station has been excellent,” commented Hendrickson. “Additionally, he has displayed a great attitude and a cooperative personality throughout the year. This has proven to have a noticeably positive effect on those around him. Furthermore, he has proven himself to be an aggressive, competent, and conscientious firefighter.”

As a member of the Hazmat Team, Coffin procures and maintains the Hazmat Team/BFD’s meters and monitors, including the Draeger Four Gas Detectors, the Canberra Radiation Detectors, the Hazmat Team’s Draeger XAM 7000 and the RAMP Bio-threat Detection Electronic Reader. Coffin trains BFD personnel in the use of these meters. Coffin recently successfully completed Flashover Instructor training and was selected to join the Apparatus Committee, completing a variety of safety and signage projects.

“Firefighter Coffin is an outstanding Burbank City Firefighter,” concluded Hendrickson. “He cares about his job and enjoys giving extra effort to help make our Fire Department stronger and better.”

Baldridge, Konzen, Chest and Coffin were congratulated at their respective fire stations earlier in January. In addition to Firefighter of the Year Eric Rowley, who was profiled in a recent myBurbank story, these four firefighters were honored by the Recognition and Awards Committee, comprised of BFD firefighters, and their names presented to Fire Chief Lenahan for their commitment to being and doing their best for their fellow firefighters and the people of Burbank. 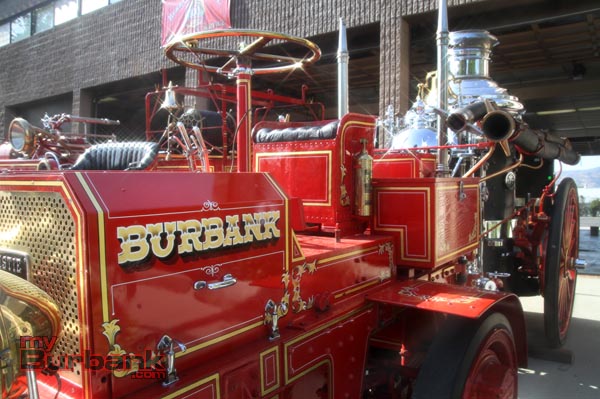