One of the toughest parts of every school year is graduation time because so many high school seniors will move on an go in a number of different directions in continuing their education and athletic careers.

Some will still be competing locally. Others will not. We took a look at where our seniors are going to college.

The Burroughs Class of 2019 is led by an athlete who actually never represented his school. Dylan Young, who is one of the top gymnasts in the nation, has signed a letter of intent with the University of Nebraska.

Dylan Young will compete in gymnastics at the University of Nebraska.

From the girls’ volleyball team, Juliana Van Loo will join her older brother Ryan, a 2016 graduate, at Lewis University in Illinois. Her Burroughs teammate Shea McGovern will continue her career at Cal State Los Angeles.

Sam Tipton, the boys’ volleyball Pacific League Player of the Year, will continue his career at Grand Canyon University.

Distance runner Raymond Berrellez will continue his career as a preferred walk on at the University of Arizona for the cross country and track teams.

Softball player Hannah Skinner will continue her career at Cal Lutheran in Thousand Oaks, where she will play for former Burbank High coach Debby Day.

Swimmer Nathan Gault-Crabb will continue his career at Lawrence University in Wisconsin.

Jhazmin Pitts will continue her basketball career at Glendale College.

Bulldogs will be well represented at colleges around the nation.

Receiver/defensive back Erik Harutyunyan will play football at UC Berkeley as a recruited walk on. 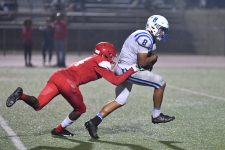 Erik Harutyunyan will be helping out the Golden Bears at UC Berkeley. Photo courtesy Doug Brown

Burbank quarterback Matthew Porras will continue his career at Whitworth University in Washington.

Baseball player Davis Mieliwocki will suit up next season for Chapman University in Orange.  Teammate Joey Clark will play baseball at prestigious Macalester College in Minnesota.

Zion Chavez will compete on the men’s track and field team at Kansas Wesleyan University.

Four Pioneers will continue their athletic careers in college.

Justin De Sales, who previously attended Burbank High, will play basketball at the University of Puget Sound.  Carley Gay will continue her softball career at Azusa Pacific University. Ashley Sands will be part of the competitive cheerleading squad at UC Santa Cruz.

The Sherman Oaks-based school has several  seniors from Burbank who will continue their athletic careers. Swimmer Dominic Margarino will compete at the University of Southern California.

Dominic Margarino will swim for the USC Trojans.

Former Burbank High point guard Tyrese Willis, who transferred to the Woodland Hills school in the fall,  will join his former teammate Justin De Sales at the University of Puget Sound.