Burbank Police are looking for a man who robbed Antiques on Magnolia Tuesday around 3:30 pm. 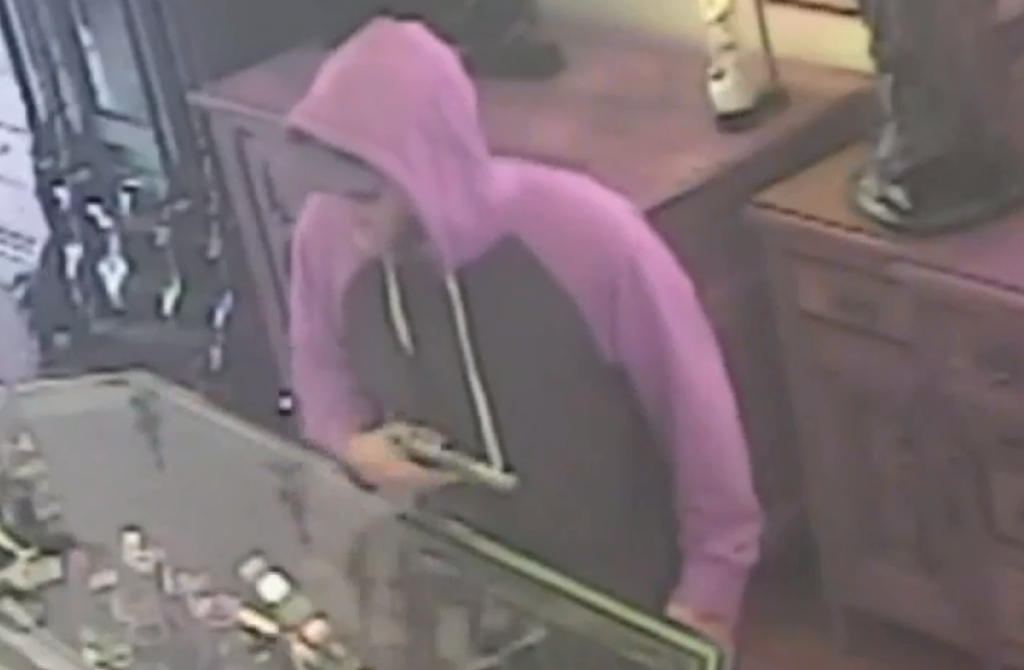 The daring daylight robbery is the first armed robbery in Magnolia Park since the Bank of America on Magnolia was robbed last August 17. At that time the man, Mark Logan of Burbank, claimed to have a gun.  Magnolia Park has gone through a rash of late night, early morning break ins  during the past several months.

Police are looking for a white male, possibly in his 20’s and stands between 5′ 7″ to 6 feet tall. Police said that man appeared to have reddish facial hair in his beard and mustache and wore a red and black hoodie with dark pants.

In a security video it shows the suspect enter the store and produced the gun. After a short period of time, the suspect raised the gun to the victims head to get him to speed up. 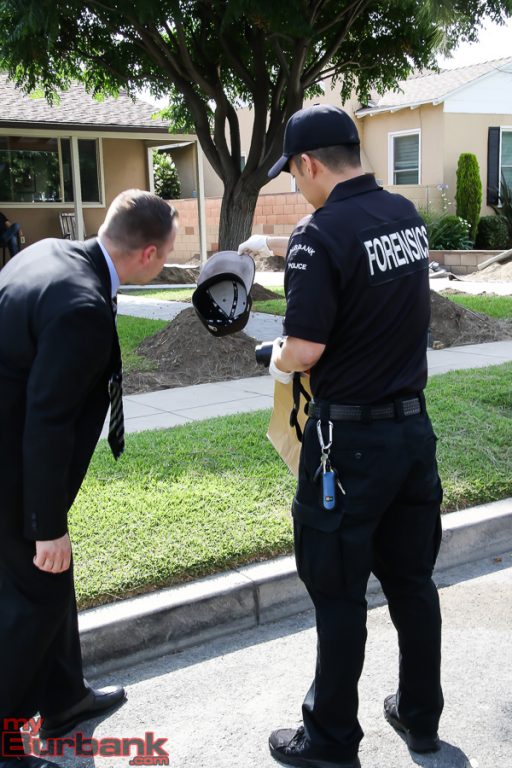 Police look at a possible hat that was dropped by the suspect on Lima, south of Magnolia (Photo by Ross A. Benson)

According to KABC-TV Channel 7, the victim, David DeWitt, told the station “”The second time he pointed it at me, he says, ‘Do you want me to shoot you?’ and I says, ‘No, I don’t want you to shoot me.’ I says, ‘But I’m here.’ And I just kept filling up the bag.”

Store owner Sheryl Coughlan also spoke to KABC-TV and told them “We probably lost at least $30,000 in gold and diamonds. The shop, Bell Cottage, on the corner has had their glass broken four times in the last four months and they’ve taken the cash registers. My neighbor, 1928, (they) took her cash register and smashed the store in.”

The suspect traveled southbound on Lima from the store where he took off his hat and sweater as he fled the scene of the robbery. Detectives and Evidence Technicians gathered the evidence.

Immediately after the robbery, Roosevelt Elementary School was placed in a lockdown for a short period of time. Officers also had a lead in the area of Lima and Verdugo that did not result in the capture of the suspect.

Members of the public with any information about the suspect or the robbery are asked to call the Burbank Police Department Investigation Division, at (818) 238-3210 and may remain anonymous. 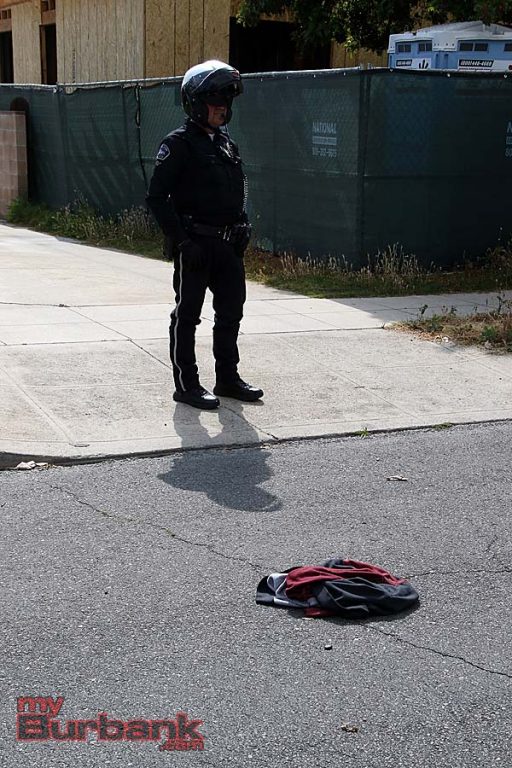 A Burbank police motor officer stands guard over a sweater that was possible left by the suspect as he ran down Lima toward Clark (Photo by Ross A. Benson) 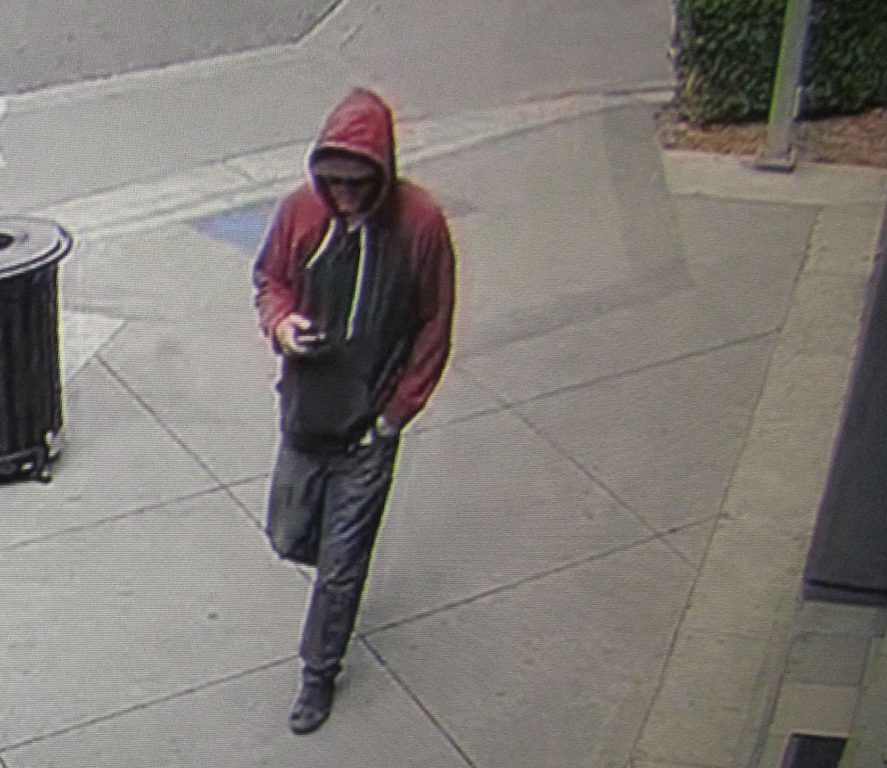 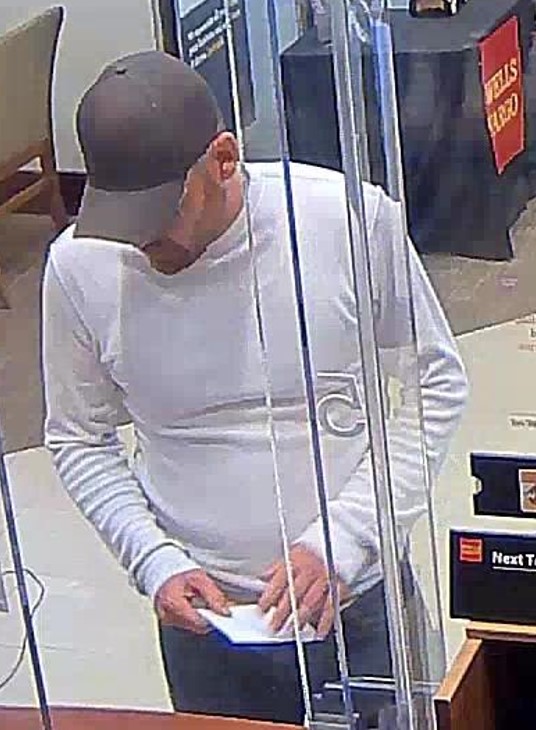 Burbank police responded to the Pizza Hit Take Out located in a strip mall at California and Magnolia on Sunday night around 10:40 pm after receiving an armed robbery alarm.

Upon arriving they discovered the restaurant had been just be held up by two white males wearing black and both had masks on.  One was reported to be taller while the other was medium height.

The men produced a knife and received an undisclosed amount of cash. Employees saw the two men exit but do not know if they were in a vehicle.

Burbank police were on scene within five minutes of the robbery and checked the area but were unable to find either suspect.

Burbank police arrested 25-year-old Thomas Taylor of Los Angeles on Monday, April 7, for armed robbery. Officers stopped Taylor as he was exiting CVS at 511 Hollywood Way around 4:00 a.m., as they were responding to a call about a third attempt by the same suspect to take prescription medication from the pharmacy while brandishing a knife.

The male suspect first displayed a large knife and demanded a bottle of Xanax from the CVS pharmacist on duty at 7:30 p.m. on Saturday, April 5, according to Sgt. Darin Ryburn of the Burbank Police Department.

In that incident, the female pharmacist ran to the back of the pharmacy and the suspect, described at that time as a male, white and approximately 25 years old, left the drugstore.

Just a few hours later, at 5:40 a.m. on Sunday, April 6, officers were called to CVS for a suspect matching the description of the suspect in the first attempted armed robbery.

The male pharmacist on duty was aware of the attempt from the previous evening. When the suspect approached the counter and demanded a bottle of Xanax, the pharmacist ran to the back of the room.

The suspect, later identified as Taylor, climbed over the gate to the secure area. The pharmacist, fearing for his safety, pointed to the shelf containing Xanax, explained Ryburn.

Taylor then picked up one bottle of Alprazolam (generic for Xanax), climbed over the security gate and walked out of the store.

On Monday, April 7, at 3:57 a.m., officers were dispatched to a theft in progress call at the same CVS, with the suspect demanding narcotics from the pharmacist on duty. When the pharmacist didn’t give the suspect the narcotics, he left the drugstore.

The suspect was identified as the same suspect from the previous two incidents and officers contacted the suspect, Taylor, as he exited the store, said Ryburn.

Taylor was arrested for commercial burglary and armed robbery and booked at the Burbank Jail with a bail of $50,000. Taylor was released on April 8 and is due in court on April 29 to answer the charges.

Froyo Bliss was robbed again at gunpoint yesterday, January 16. At approximately 2:30 p.m. a white male suspect pointed a blue steel handgun at the yogurt shop’s clerk and took an undisclosed amount of cash, according to Sgt. Justin Meadows of the Burbank Police Department. The alleged armed robber fled on foot towards the rear of the mini-mall lot at 101 N. Victory Blvd. in which Froyo Bliss is located.

The suspect appears to be in his 20s and about 6’1.” He was reportedly wearing a yellow and multi-color plaid flannel shirt. The police report the suspect is reportedly “similar” in appearance to the first robbery suspect who robbed Froyo Bliss on January 5, added Meadows.

Burbank Police and Detectives responded to the scene and surrounding area, but did not locate the suspect. The investigation is ongoing.

– Be cautious of who enters your salon
– Make sure you don’t cover your windows
– Leave blinds, curtains, and shades open in order to be aware of who is outside your business
– Maintain a working surveillance camera system

Two women and a man were robbed at gunpoint Wednesday Aug 1 at 2:40  am in the 2000 block of Hollywood Way. The three victims had just returned from Hollywood and were parking their vehicle on Hollywood Way, when they observed a newer silver or gold compact vehicle conduct a U-Turn on Hollywood Way behind them, and two males exited the vehicle.

As the victims began walking to their residence, they saw the two male suspects approaching them.  One of the victims looked over at the suspects and saw that one of them had a black handgun in their hand.  The suspect then pointed the handgun at the victims and ordered the two females to put their purses down on the ground, and for the male to place his wallet on the ground.  All three victims complied with the suspect’s demands.

The suspects then grabbed the items, ran back to their vehicle,  and drove off southbound on Hollywood Way.

This robbery is very similar to one that happened earlier at a nail salon near Olive and Victory and also one that occurred in the City of Glendale.

The two suspects are described in their early 20’s and witnesses said in their San Fernando Blvd. robbery that a third person was seen behind the wheel of a possible green or silver Nissan as they sped away.

Those who subscribe to our Twitter account would have heard about the robbery as it happened last Friday.  To subscribe, go to www.twitter.com/burbanknbeyond to get breaking Burbank News sent to you as it happens.