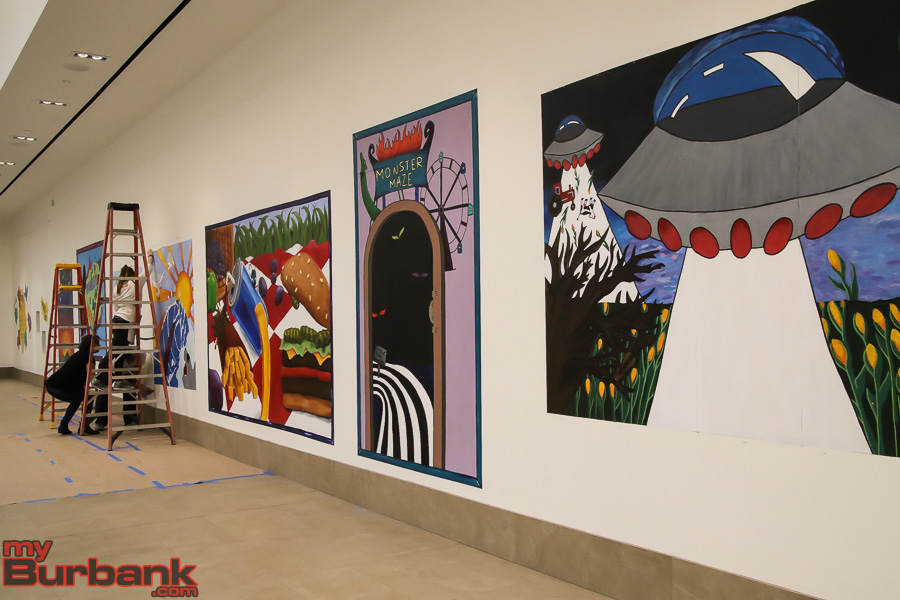 Art classes from schools in the district have worked together to add color to the mall as it undergoes refurbishments. The 6 ft. x 8 ft. murals vary in themes, showcasing the artistic styles of the students. One mural depicts a political message about equality, while another depicts a flying saucer hovering over a cornfield.

“They were really self-led and they were in charge of what they wanted to illustrate,“ said Burbank High School art structure and art history teacher, Rebecca Platner, who oversaw the district-wide project. “It’s special for them to have their art in a public place.”

Shoppers are encouraged to take part in the interactive murals and post to social media, tagging #BUSDpaintsBTC. 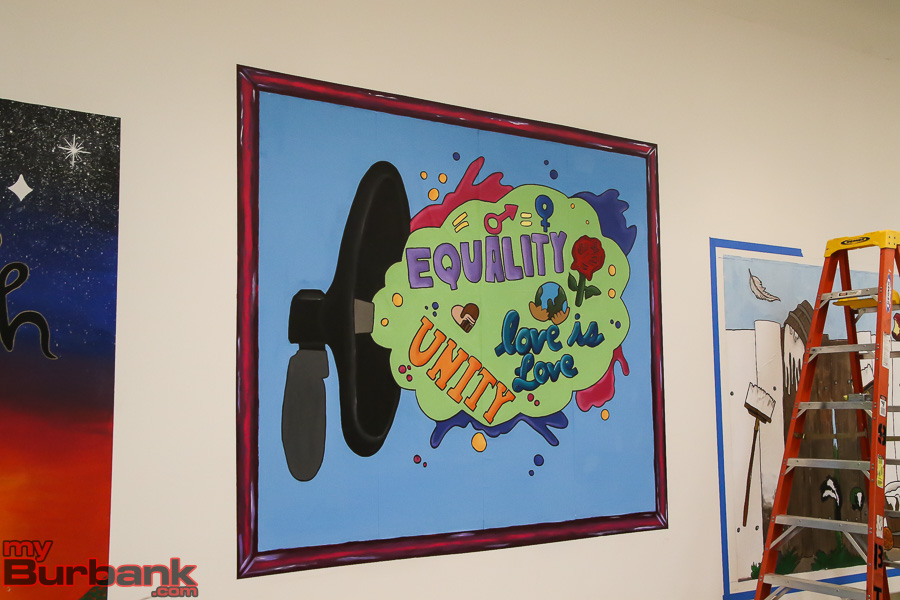 Students and teachers alike invested a lot of their time in creating the murals, totaling about a month between the design and painting process.

“My students submitted design concepts and then we voted on them and we refined them until we got to the one we wanted to work on for the wall,” said Burbank High School visual and performing arts teacher, Jonelle Pickett.

Pickett’s advanced animation class collaborated on a 3D mural depicting a picnic with soda, fries, and a hamburger. CJ Jobelle, a junior, is one of the students who worked on the assignment.

“The overall painting took about three weeks, roughly around that. People were taking turns to paint it,” said Jobelle.

Visitors can attribute the murals to the individual classes who created them, as the school names and grade levels are provided next to each illustration.

“It’s really exciting that under Rebecca’s leadership we were able to get several schools and artists representing their talents to get visual arts into the community,” said Peggy Flynn, arts and career technical education coordinator for BUSD.

“It helps people see the power that art can have in an open space like this.”

Eventually, the wall will come down once space is rented out. Until then, visitors of the Burbank Town Center can admire the creative work of the next generation.

McKinley Elementary School students began school on Monday with a colorful new mural on campus. Created by Nickelodeon’s current group of college interns, or Nickterns, the mural was formally celebrated with a school-wide assembly on Thursday, August 20.

“The intention was to represent teamwork,” said Nicktern Lauren Patterson, who designed the mural. “We want the students to look at the mural and be inspired to work and play together.” 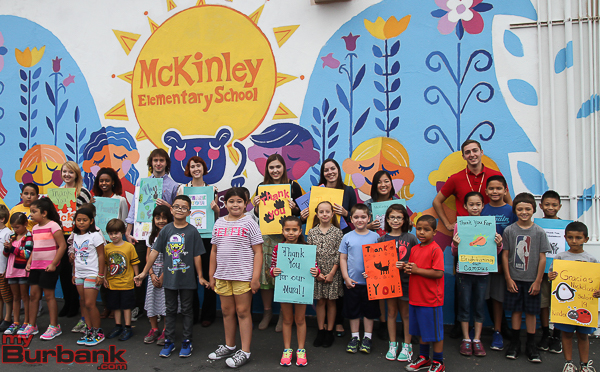 The Nickterns spent many hours during the week of August 10 through 14 creating the artwork at the school site. 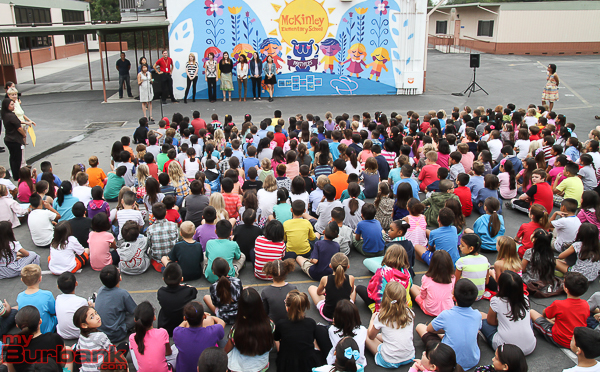 “I was so excited to hear that Nickelodeon had chosen McKinley for a mural,” commented McKinley Elementary Principal Liz Costella. “Carson, Amy and the interns were amazing. The mural is beautiful and is an incredible addition to our campus.”

Carson Smith and Amy Wu at Nickelodeon coordinated the project with the school.

“It is perfect and looks like it should have always been there,” added Costella. “We are so grateful to Nickelodeon and the interns for this amazing gift.”

One glance at Burbank resident, David Looft and it’s clear he is an artist. Relaxed, laid back, and dressed in his usual attire: a paint splattered T-shirt and jeans, he describes himself as unconventional and extremely lucky. “I am living the ultimate bohemian lifestyle,” he says. 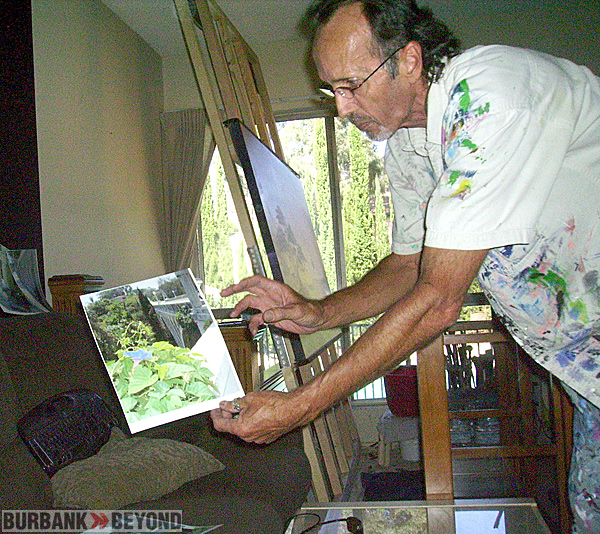 David Looft explains his next project, a painting of the Shakespeare Bridge. (Photo by Juanita Adame)

Looft grew up in Covina, Ca during the 1960’s and says although his father’s name was “Art” he was anything but an artist. “My dad couldn’t hold a pencil,” he says with a laugh. “But my mother is gifted, she paints to this day at 91-years-old.”

In 1974 during his last year of high school, Looft says he made a drastic decision by declining an offer to attend a prestigious art academy. What’s worse is, he didn’t bother telling his parents about it.

“Well, my brother is extremely talented,” he says of his brother Kent who is eight years older than him. “He graduated from the Art Center College of Design, that is like the Harvard of art academies.”

Eight years after his brother Kent received his scholarship, it was his turn. “It was my last year of high school,” says Looft. I got the same art teacher, and guess what, she gave me the same scholarship!” 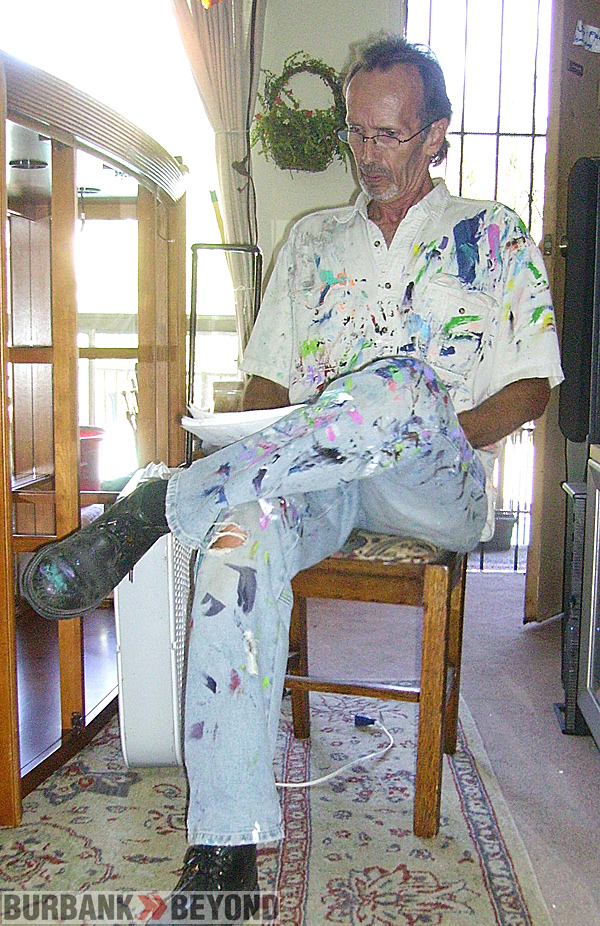 The idea of going to college though, did not interest him. “I thought of all those nights I’d go to sleep and my brother would be working on alphabets,” he says. “Drawing the alphabet in ink, all night long- then I’d wake up and there he’d be: face down, asleep in his work.”

After seeing what college life did to his brother, Looft said he decided not to accept the scholarship. “My art teacher looked at me like I was crazy.”

He says he has no regrets. “I just felt it should have gone to someone who really wanted it, and that was just not me,” he said. “I chose a different route, I’m okay with that.”

Nevertheless, he says the need to express himself through his paintings has not and will not ever go away, college or not. “We artists do this because we have to, it’s like breathing.”

His apartment is a clear indicator of that also. Filled with art supplies, and hand drawn sketches, paints of all colors and brushes of all sizes, Looft says this is where his imagination comes to life.

“You see this?” he says as he points to a wooden bed frame. “You probably think it’s the frame to a queen size bed, but it’s not- it’s an art easel.”

Upon further inspection it’s clear the bed frame has been altered.

“I needed to think of something for my next painting,” he says. ‘It’s going to be a 5 foot by 7 foot depiction of the Shakespeare Bridge in Franklin Hills, I don’t have much room in here, but I will make it work.” 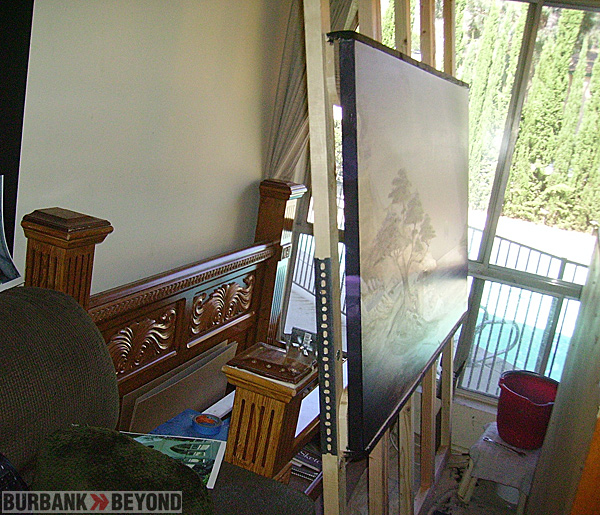 A bed frame David Looft converted into an art easel.(Photo by Juanita Adame)

One of Looft’s most recent, and proudest accomplishments is a 3 foot by 5 foot acrylic on canvas painting he calls “Venus Setting.”

He said the inspiration behind Venus Setting came from his girlfriend Caryn, or better yet- her eyes.

“I am trying to find the exact color of her eyes,” he says as he looks over to her. “You see, look at her eyes, they are filled with color.”

Lowering her dark shades, Caryn, who is sitting next to Looft, reveals a pair of crystal clear blue eyes. “See, look look,” he says with excitement in his voice, pointing to the inner part of her iris, “There are so many different purples and blues in there- amazing isn’t it?”

He says his ultimate dream is to keep painting, and change people’s moods for the better. “I paint peace,” he says. “There is too much turmoil in the world, we need more peace.”

His advice for fellow artists? “Well, first of all, congratulations to any artist- they are courageous for putting their work out there.”

He also adds that critics can be extremely tough on the “up and comers.”

“You know what?” he says, “Don’t take the kind words so seriously and don’t take criticism so seriously either, just do what you love and you will be happy.” 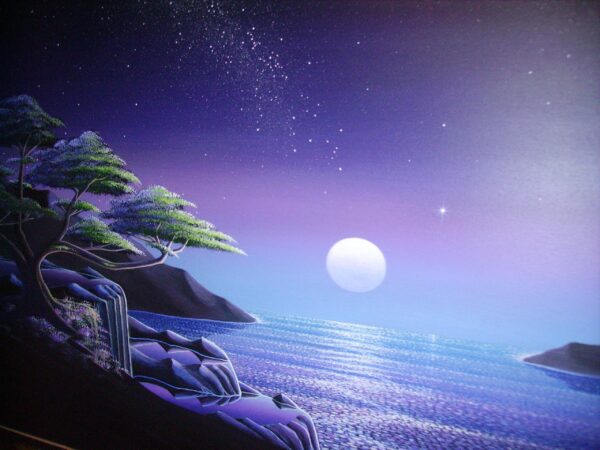 His most recent painting, “Venus Setting” was inspired by his girlfriends blue eyes. (Photo by Juanita Adame)