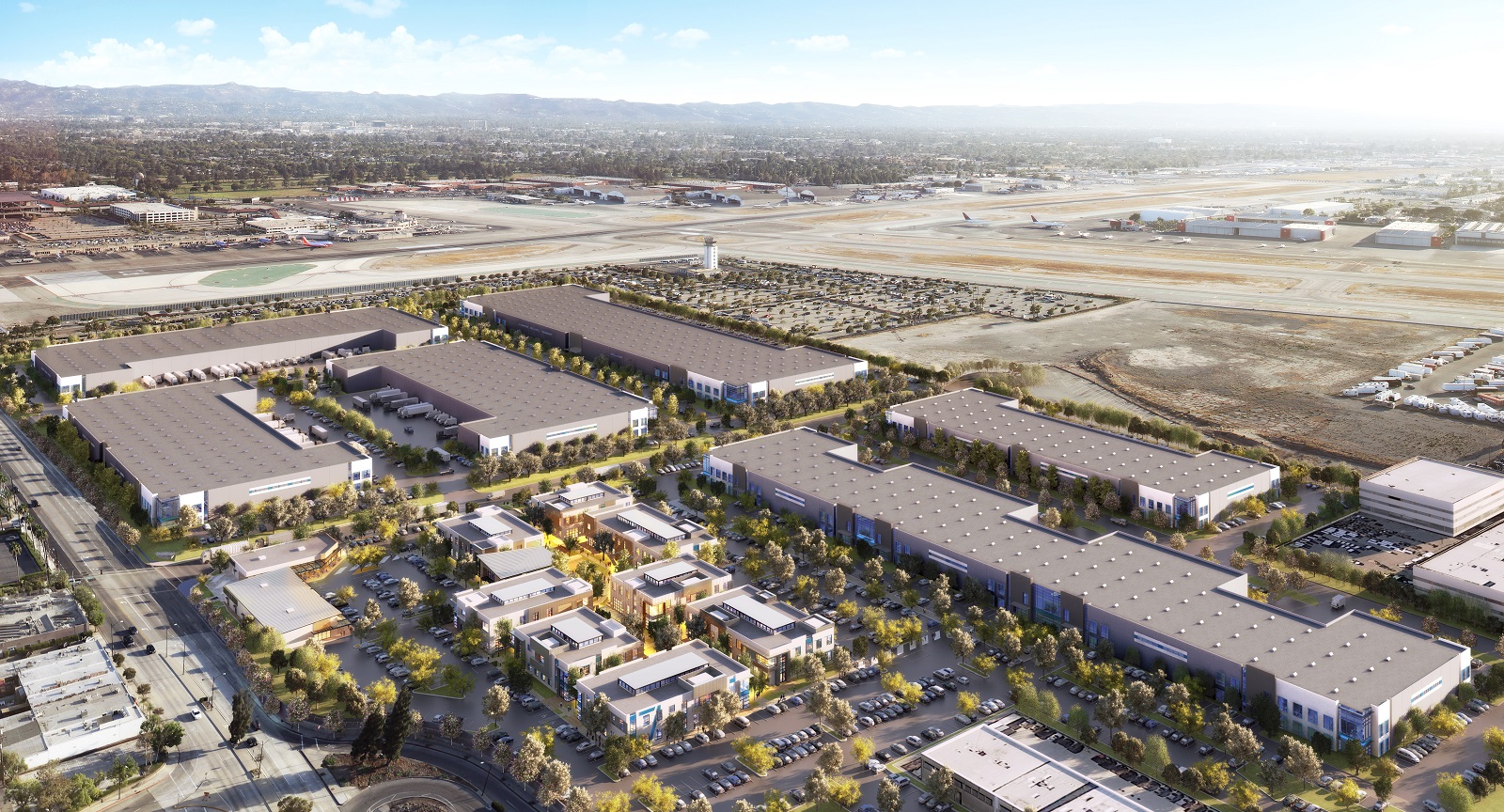 Overton Moore Properties (“OMP”) commenced construction today on Avion Burbank with a ground-breaking ceremony for the largest infill development project developed during the past 20 years in San Fernando Valley.

When completed, the mixed-use business park will include 18 buildings representing 1.25 million square feet of creative industrial, creative office, and retail space along with a 150-room hotel. The project is a joint venture between OMP and Invesco Real Estate. OMP purchased the property in 2016 from the Burbank-Glendale-Pasadena Airport Authority and received project approval from the Burbank City Council earlier this year. 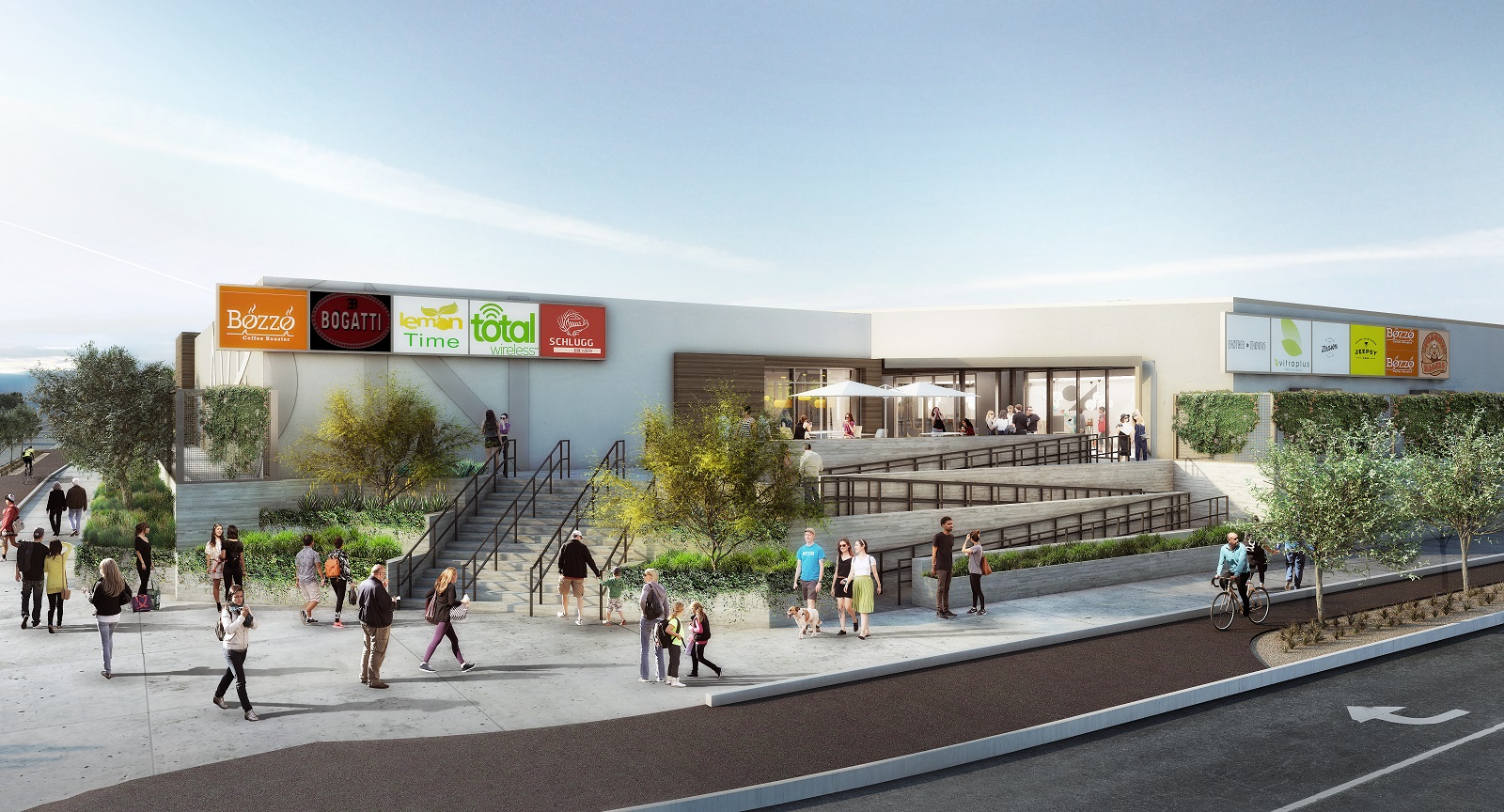 Located on 60 acres at the intersection of Hollywood Way and San Fernando Road, Avion Burbank is surrounded by multiple transit opportunities, including a Metrolink stop, Burbank Hollywood Airport, multiple bus lines, and excellent freeway access. The project will be LEED Certified SILVER Core and Shell, providing opportunities for users and their employees to be in an amenity-rich environment that includes multi-purpose walk paths, indoor/outdoor meeting areas, bike share stations, retail establishments, and a boutique hotel. The project will install 115 Level 2 EV chargers and prewire and has the room to add 62 parking stalls and truck loading docks for future EV chargers.

Brokers are expecting that Avion Burbank will be a popular destination as the mixed-use project will fill a unique niche in the Southern California marketplace.

“The market is really hungry for this type of smart, integrated facility solution,” said Matt Hargrove, Vice Chairman of CBRE. “There is an unprecedented demand for Class A industrial space driven by large entertainment and content firms and their supply chains. The creative office product which is for sale or lease will provide owner-users with a unique opportunity to create a design-to-suit office experience all within a multi-modal master planned setting. With its scale and variety, we see a huge opportunity for Avion Burbank to be a location of choice for users looking for a unique environment—all in a single location.”

Exterior view of the retail area

The Avion Burbank project has achieved a major milestone with the City of Burbank’s release of the draft environmental impact report (DEIR) on the mixed-use campus proposed by Overton Moore Properties for 60 acres of vacant land adjacent to Hollywood Burbank Airport.

The DEIR release marks the start of the public review and comment period on the document that will be followed by public hearings before the Burbank Planning Board and City Council. Those hearings are expected to begin this fall.

The document, which is available on the city’s website at http://www.burbankca.gov/home/showdocument?id=46052, will be the subject of a comment hearing conducted by the Burbank Planning Board on Monday, Sept. 10. That hearing will begin at 7 p.m. in the council chambers at City Hall, 275 E. Olive Ave.

Avion Burbank proposes to transform the Golden State Project Area. A unique mixed-use project with creative office and creative industrial retail space, along with a hotel, the project promises to change the landscape of the area and, in the process, bring additional jobs and revenue to the City. 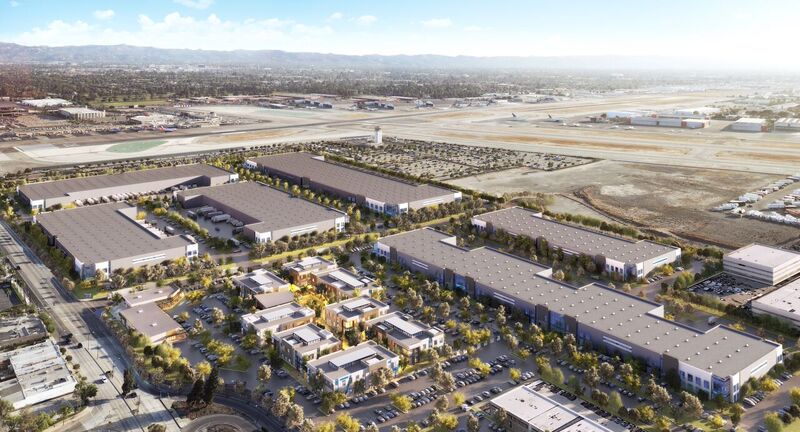 The mixed-use campus will provide users with a unique opportunity to occupy state-of-the-art creative industrial buildings, which are geared towards the entertainment, media, technology, aerospace and new economy tenants. Demand for this new product type is strongest in urban, mature infill locations such as this site that have close proximity to housing, transportation and amenities.

The philosophy behind Avion Burbank is to create an ecosystem where companies can collaborate and foster innovation while recruiting and retaining the ever-evolving workforce in our new age economy. Creative industrial combines the best characteristics of creative office and industrial space to deliver a better user experience. It’s a hybrid of industrial, manufacturing and office space in one building, boasting. indoor/outdoor patios, extensive glass for natural lighting, high ceilings, dramatic entries and amenities such as indoor-outdoor gathering areas, multi-use trails, restaurants and services within easy walking or biking distance.

The creative office component will be unique to the Southern California marketplace and provide office condominium units that will be available for sale or lease. Surrounded by an amenity-rich environment, the creative office space will provide users the opportunity to design their own spaces and take full advantage of their preferential real estate needs. The design is inspired by the storied aviation history of the site with an architecturally distinctive look that is clean and modern. Building amenities include: two-story atrium lobbies, open truss ceilings, extensive natural light, open and efficient floor plans, clear story glass on the second floor, concrete floors, roll-up doors to exterior meeting areas, and operable windows.

Avion is conveniently adjacent to the site of the future Hollywood-Burbank Airport Terminal and is a short walk to the new Burbank Airport – North Metrolink Station on North San Fernando Boulevard. The project will construct, maintain and donate 60 parking spaces for Metrolink station users on the Avion Burbank site, and the campus parking will include 60 EV chargers. The project has also integrated internal mobility bike share facilities throughout the campus. Street improvements along N. Hollywood Way will include wide sidewalks, protected bike lanes, new signals, and additional left and right turn lanes.

Within the 640-acre Golden State District today, there are 160 companies occupying 3.5 million square feet of space in industrial/warehouse buildings. The majority of these older building are occupied by aerospace, entertainment, technology/electronics, construction/design and clothing/textile companies. Avion Burbank will provide the opportunity for these companies to expand organically and stay in the area by relocating to state-of-the-art, more efficient facilities. The movement of these companies will allow owners to transform their properties into higher and better uses and make over the area in a way that best meets the City’s goals for the Golden State Project Area.

For more information on the project and to sign up for future updates, please visit www.avionburbank.com.

“The students had an opportunity to see an architectural firm that produces many of the world’s largest construction projects including LA Live, The Ritz Carlton Los Angeles and the Shanghai Tower,” said Burbank High CAD and Digital Photography teacher James Bentley.

“The studio environment is where original ideas and creativity happen; the students of Burbank High school saw first hand what occurs inside a professional working architectural studio,” he added. 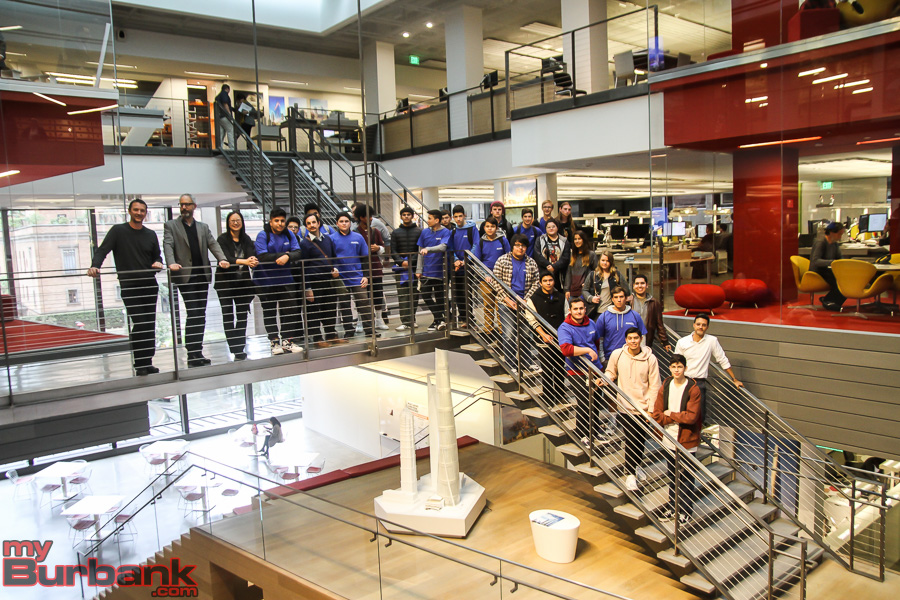 “Gensler was a very open minded place that had a lot of crazy detail in their buildings and well designed structures that are all very innovative,” commented senior Cameron Loffarelli. “You won’t see that on your average type of building.” 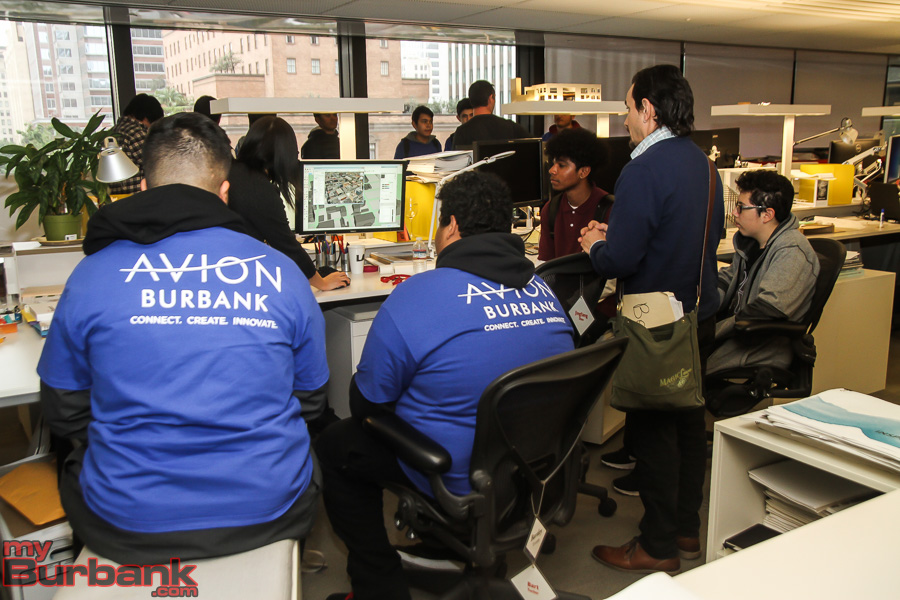 Overton Moore covers the costs of transportation, lunch and substitute teachers so the regular class teachers can attend with their students, added Flynn. Field trips occur on average once or twice each month during the school year.

The students “are learning from professionals who were once high school students themselves,” said Flynn. “How they found their way to their chosen career – education, interests and which jobs they held as they worked to their current positions… and following the entire development of the AVION project as it unfolds!”

“We are really excited to see the work site evolve and will be visiting as they move from planning to construction, and ultimately the completed project – hearing from every entity involved and their particular role in bringing the vision to fruition.” 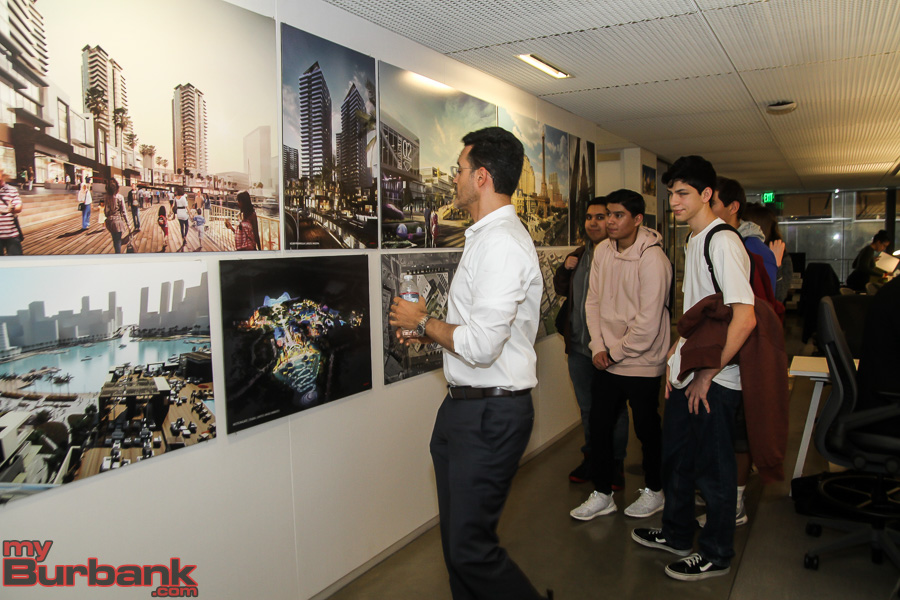 The Day On The Job visit to Gensler began with lunch in the conference room and a PowerPoint presentation on the company’s work for AVION Burbank.

After the lunch, Gensler Principal Marty Borko facilitated a panel discussion with four Gensler architects and designers – each who made their way to careers at the firm from throughout the world – one from China, two from New York and a third who immigrated from Cuba.

“I think it was especially meaningful for our students to hear that not all set out to be architects,” said Flynn. “One started in construction, another had been a writer, another an artist. All shared that they considered what they enjoyed doing and investigating what skills and education was required before pursuing their education careers and no two stories were the same.” 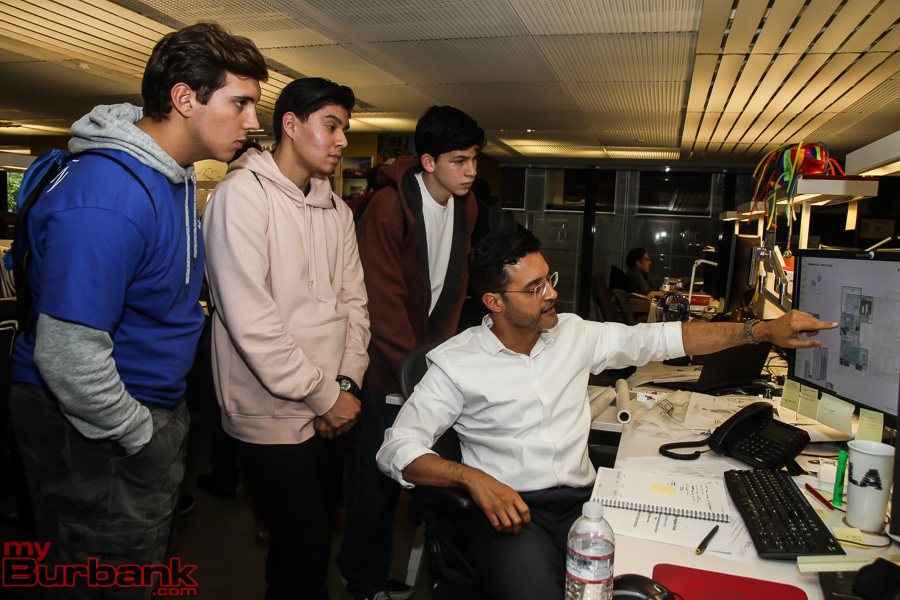 “Some began as undergraduates while others started in other fields that led them to people and projects and one opportunity/interest led to another. We have so many students who have come from other countries and/or cultures – I think it was powerful to have them hear those stories and that they succeeded in achieving their goals.”

The Burbank students toured the Gensler facilities and visited the work space of each host, viewing projects both in process and completed.

“I was particularly impressed with the questions students asked,” added Flynn. “Our hosts shared that they were impressed with the caliber of the CAD program and how lucky our kids were to be able to learn skills with tools being used in their industry.” 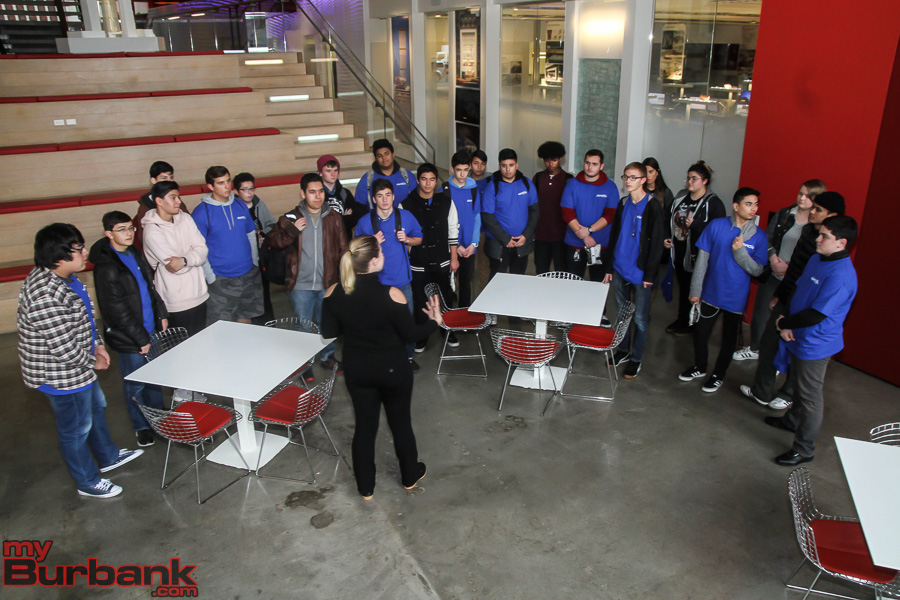 “The AVION Burbank project has undergone many phases of development, and the students were able to see the conceptual renderings and digital animations of the proposed site,” Bentley said about the visit to Gensler. “Seeing the proposed 3D renderings overlaid on Google maps images made the project come to life and allowed everyone to realize what this will look like in the near future.”

“I think that the trip we took was great because it helped me look toward my choices of what courses to take in college and what career to pursue in the future, and if it involves me becoming an architect then I’m glad that I’ll be getting to do something that matters,” commented senior Shant Tergalstyan. 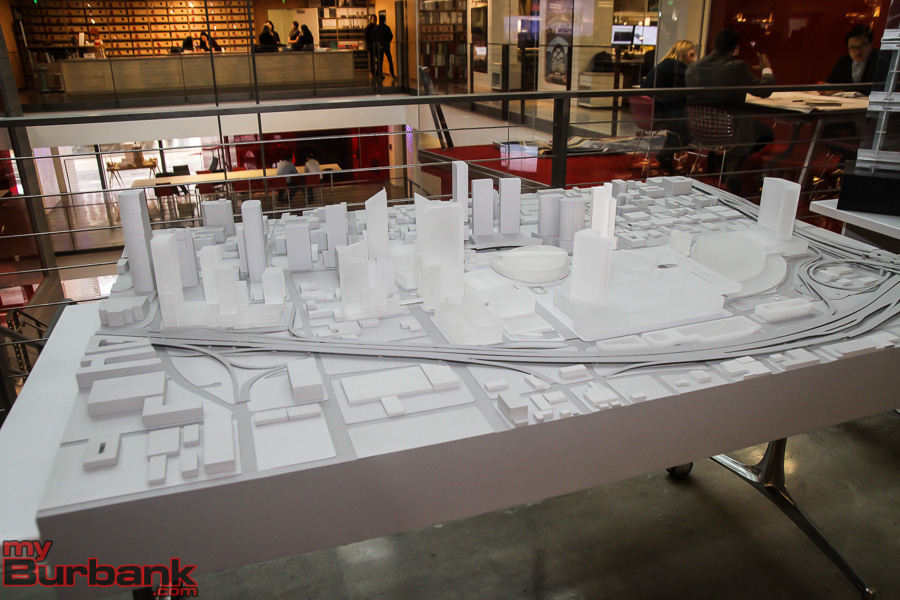 AVION Burbank is a proposed development formerly known as the B-6 site, located to the east of the Burbank Hollywood Airport. Approximately 1.2MSF of mixed use campus development on 60 acres of land, the project pitches “creative office, creative industrial, retail to serve the project and surrounding business community and a hotel site.” 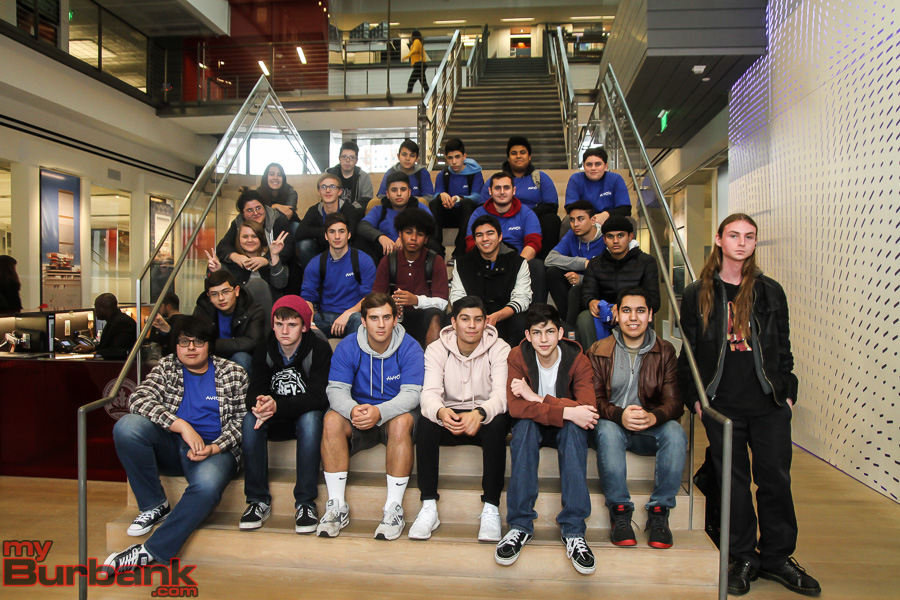