For a few years now, people have wandered by the papered-over window promising BLVD TACO next door to BLVD Cafecito on Magnolia Boulevard in Burbank’s Magnolia Park shopping district. A few weeks ago, the paper came down and the simple and small restaurant front opened up, letting the neighborhood know that BLVD TACO was finally open.

Interest remains high, as the small takeout spot works out the kinks with fulfilling orders and settling on operating hours. We tried several of their tacos recently, and have to admit while they’re not as savory as we’re used to, they were fresh and tasty. 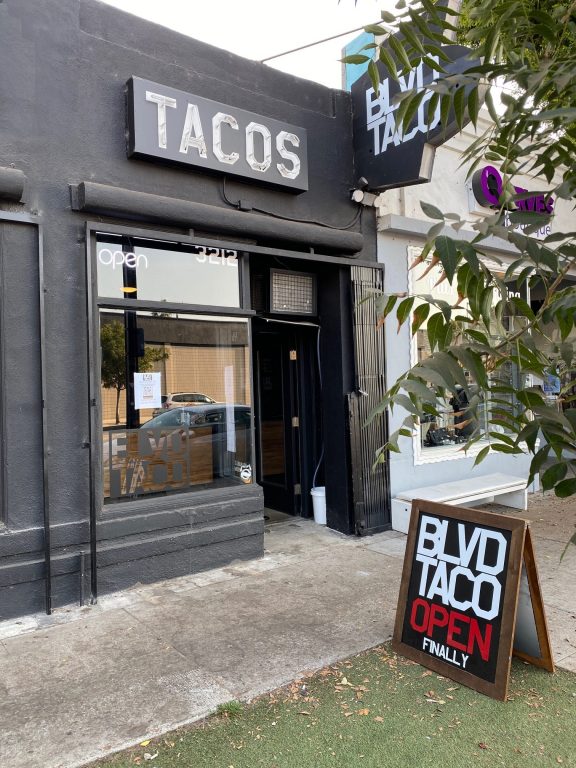 We tried the carne asada, birria, chicken, potato, mushroom and bean tacos, along with a carne asada quesadilla and the house made guacamole. All the tacos came with salsa, onion and cilantro.

The quesadilla was our favorite bite of the order, particularly when topped with the included side of red salsa.

The guacamole was good, but we prefer a lot more cilantro, onion, lemon and garlic in our guac. The chips were decent.

The carne asada taco was a little on the gristly side for our taste. The potato taco was simply potato, cheese and lettuce in a basic hard shell taco. Out of all the fillings, perhaps the chicken taco was our favorite.

While we appreciate the use of paper packaging, it doesn’t keep food warm enough for a short drive. We recommend eating your tacos as soon as they are ready.

Taquitos aren’t available until after 1:00 p.m. They can be made from the diner’s choice of several fillings, as are the nachos. BLVD TACO offers breakfast burritos in the mornings. We will have to give them a try.

(from left to right) Bean, mushroom and potato tacos at BLVD TACO. (Photo By Lisa Paredes)

When we ordered in person on a Saturday around noon, the 15 minute wait indicated for the order to be ready ended up taking about 40 minutes. We expect this will improve over time, particularly with the recent addition of a phone number for ordering.

We realize Magnolia Park is in great need for more food options and are sure BLVD TACO will make most diners very happy. We prefer the flavors and cooking style of more traditional style taquerias, but recognize the huge effort it takes to open a restaurant during a pandemic and look forward to trying BLVD TACO again.

Located in the heart of Magnolia Park, BLVD TACO is a promising new takeout spot.


BLVD TACO receives: On The Marquee

(from left to right) Bean, mushroom and potato tacos at BLVD TACO. (Photo By Lisa Paredes)