The Burbank and Burroughs boys’ basketball teams will be hoping to move forward this season after both experienced mediocrity last season. Both are solid and should be ready to go for Pacific League play, which begins today.

Burbank
Things have changed for the Bulldogs as Ernest Baskerville, who once was the head coach at Providence High, has taken over for Jamayne Potts, who took the Village Christian position.
A few players have left the program with the change of coaches, but the Bulldogs have looked solid in the early part of the season. 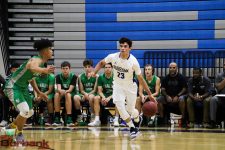 “I love the fact that they’re all good kids and they’ll do anything I ask. I think the fact of the whole process of me becoming their coach that they bonded together a little more and said whomever we get we’re going to work hard for,” Baskerville said. “That’s what they’re doing, they are working really hard.”
Burbank has no superstars, but also doesn’t have any weaknesses.
Senior Erik Harutyunyan, at 6-foot-2, will generally take the toughest defensive assignments.
Senior Miles D’Agostin (5-10), nephew of former Burbank girls’ basketball coach John D’Agostin, has been very impressive in the early part of the season with his hustle and outside shooting capabilities.
At the point guard position the Bulldogs have senior Jared Pasion (5-9), senior Issac Anglade (5-10) and junior Ben Burnham (6-0).
On the wings and inside Burbank has a solid core of seniors. Chance Van Hook, Guram Dubadze, Satchel Bookchk and Clarence Tahmasian are all 6-2. Junior Kevin Sarkes is the tallest on the team at 6-4.
Junior Leo Tahmasian (6-0) and sophomore Abiel Pearl (6-1) have both show promise in the early part of the season.
Seniors Angel Ibarra (6-1) and Jalen Clark (6-0) have played key roles.

The Indians have grown up quickly with many new faces under third-year coach Allan Ellis.

Junior Nick Garcia, who played some quarterback in football, is expected to see significant minutes at the point guard position.
Senior Brian Oasey is a combo guard who could also see time at point guard.

The Indians will also look to juniors Emery Goulet, Carson Cardenaz and Evan Zamora as well as senior Aaron Amanios to make key contributions in the back court.

“I like my team this season because they are a resilient team that competes hard,” Ellis said. “League this season will be tough because we aren’t the most experienced team. But they are learning every day how to compete at the varsity level.”

Junior Ellington Simmons is coming of a fine football season as a receiver and will also give the Indians some height inside.