If the Burroughs High boys’ basketball team wants to make a run at a CIF Southern Section playoff berth, the Indians are going to have to greatly improve over the next month.

Playing in their first game of the year, Burroughs fell behind early and never recovered in a 67-55 home loss against Glendale.

“Our offense was stagnant. We forced way too many shots in the first half,” Burroughs coach Allan Ellis said.

Burroughs (8-11 overall, 1-5 in league) got a three-pointer from Emery Goulet to tie things at 3 early in the first quarter and that was the only time the Indians were level with the visiting Nitros.

Goulet, who had a game-high 25 points, did all he could to help keep the Indians in the game.

But Glendale (16-4, 4-2 in league) had a strong supporting cast and was able to display success with both its inside and outside game. Nitros center Elvin Hartoonian finished 17 points.

Glendale also got solid shooting from junior David Shamiryan, who had 15 points off the bench and hit three 3-pointers.

Burroughs trailed 22-12 at the end of the first quarter and went up by as much as 21 points on two occasions. A three-pointer by Goulet helped cut the deficit to 39-25 at halftime.

Another three-pointer by Goulet to start the second half got Burroughs to within 39-28.

Goulet helped cut the lead to single digits at 46-38 with 1:47 left in the third quarter. But Glendale quickly responded with a three-pointer by Cole Fajardo to stop the threat of a rally.

Burroughs Bryan Oasay hit a three-pointer to cut the lead to 53-43 going into the final quarter.

Carson Cardenaz hit a three-pointer with 3:05 left to play to once again cut the deficit into single digits at 59-50.

But Burroughs was only able to cut the deficit to within eight when Goulet completed a three-point play with 1:37 left to make it 63-55.

Cardenaz finished with 12 points and Oasay had 11. Walker Miller had three points. Steven Johnson and Nick Garcia each had two points.

A deep and ugly hole faced the Burroughs High boys’ basketball team on Friday evening and it proved simply too much.

Glendale jumped out to a 24-8 lead in the first quarter and then held off the visiting and gritty Indians 59-50 in a Pacific League encounter. 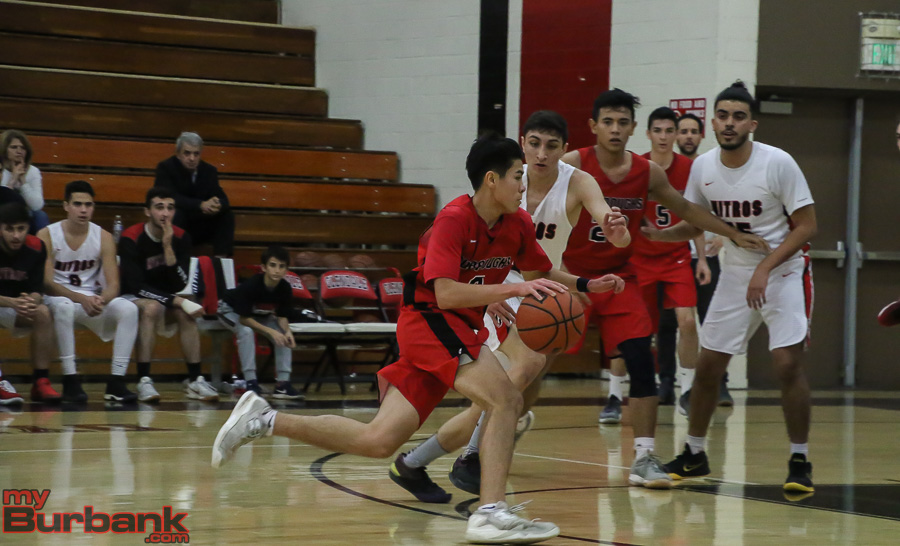 The Indians struggled to score in the first quarter against Glendale. (Photo by Ross A. Benson)

“We started the game off not ready to play defense the way we practiced, the way we prepared,” Burroughs coach Allan Ellis said. “In the second quarter we started picking up our defensive intensity and that got us back into the basketball game.”

Sammy Solis paved the way for the Indians (5-6 and 0-2 in league) with a team-best 14 points while Emery Goulet chimed in with 11.

Burroughs came out and hit on three of 12 shots from the floor in the opening period, but bounced back and drilled eight of 17 in the second frame as Solis scored eight points and delivered 10 points at the break.

The Indians nailed four from three-point range at the midway point and added three more in the second half. 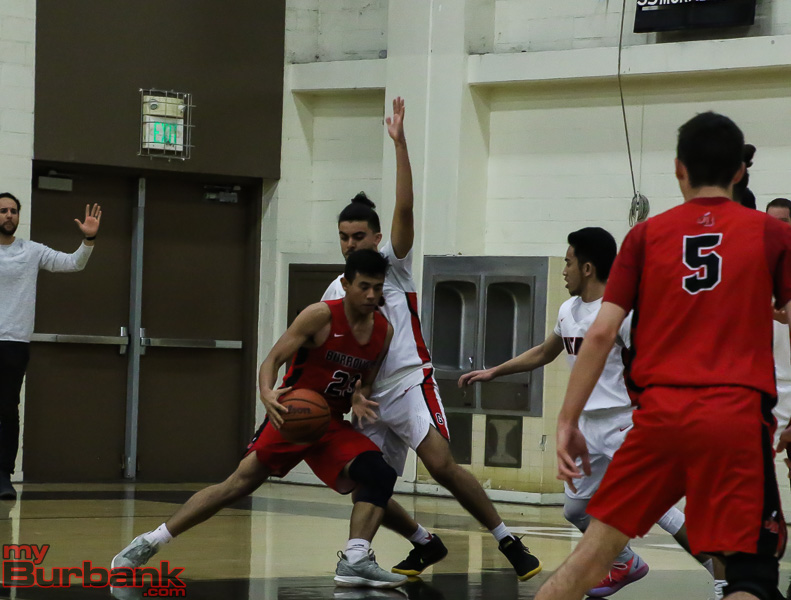 Points were hard to come by for Burroughs against the Nitros. (Photo by Ross A. Benson)

Burroughs hit four of 15 from the field in the third quarter and four of 14 attempts in the fourth period.

Bryan Oasay contributed five points in the third quarter after dropping in a free throw in the opening stanza and a trey in the second period.

The Indians were outscored 10-9 in the third period and 17-14 in the fourth frame when Goulet tallied six points including a three-pointer.

Leading Glendale’s offense was junior shooting guard Manny Kapoushian, who dropped in a game-best 17 points and hitting four of the seven made from three-point range.

Kapoushian’s three-pointer with 5:49 left in the opening period handed the Nitros an 8-1 edge. A hoop by Solis with 4:43 remaining in the second quarter sliced Glendale’s advantage to 26-14.

Senior point guard Cole Fajardo added nine points for the Nitros (8-3 and 1-1 in league), who made 13 of 28 shots for 46.4 percent in the opening half, with seven points by the intermission.

When junior point guard Edgar Kirakosian (six points) drilled a three-pointer and four minutes showing, the Nitros, who took a 42-36 lead into the fourth quarter, surged ahead 52-39.

Evan Zamora and Nick Garcia each chimed in with six points for the Indians while Carson Cardenaz dropped in four.

The Indians canned seven of 12 free throws and the Nitros were successful on eight of 16 from the charity line.