On Thursday, October 24, Burbank firefighters brought a ladder truck from Station #12 and a fire engine from Station #14 to the YMCA’s north parking lot across from the YMCA Children’s Development Center at 332 E. San Jose Ave. Several groups of preschoolers met the firefighters and were able to check out their gear and sit inside the ladder truck cab. 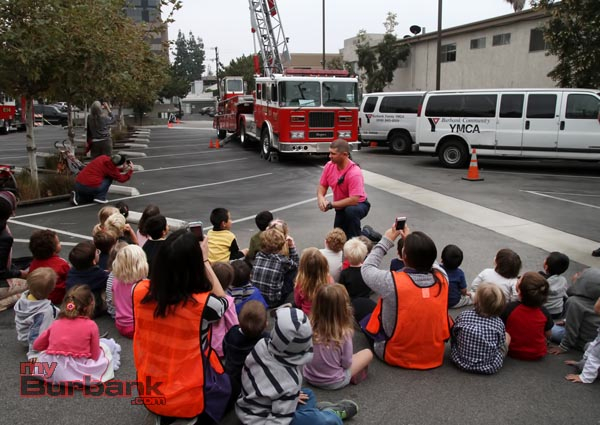 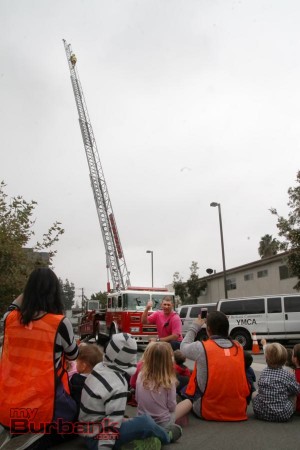 Captain Grant Stephens, from Station #14, and several firefighters, wearing pink shirts for Breast Cancer Awareness Month and others wearing uniforms or bright yellow protective suits, talked to another group of preschool-aged children, next to the fire engine.

“I like their pink shirts,” commented Carly Woodruff, age 4. She also said she enjoyed being lifted up and sitting on the high seat of the ladder truck cab. 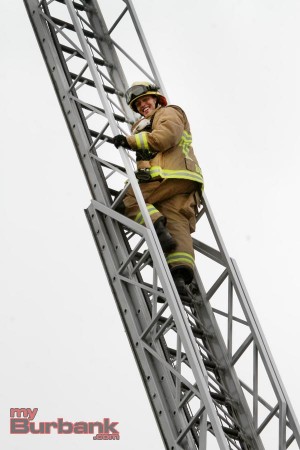 Firefighter Donan pauses mid-climb for some encouragement from the children below. (Photo By Ross A. Benson)

Firefighter Donan also climbed to the very top of the tall ladder, extended 100 ft. from the ground into the air. He paused a few times for cheers of encouragement from the youngsters watching below.

“My favorite part was when he climbed up the ladder,” added Gabrielle Castro, also age 4.

The firefighters also passed out coloring books to the children attending the YMCA Child Development Center and discussed ways to be healthy and active, in addition to fire safety. The firefighters of Stations #12 and #14 visited the preschool facility as part of Fire Safety Awareness Month. 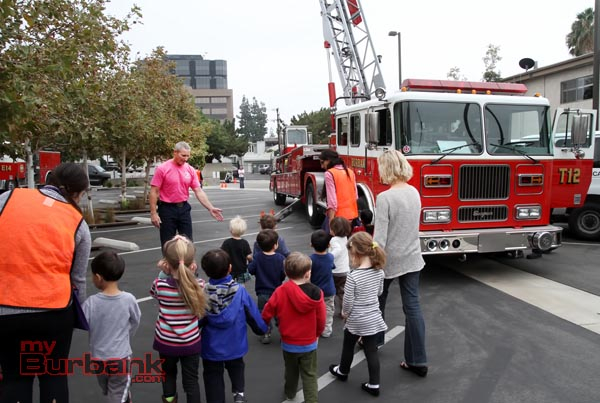 Capt. Grant Stephens takes the YMCA youngsters on a tour. (Photo By Ross A. Benson) 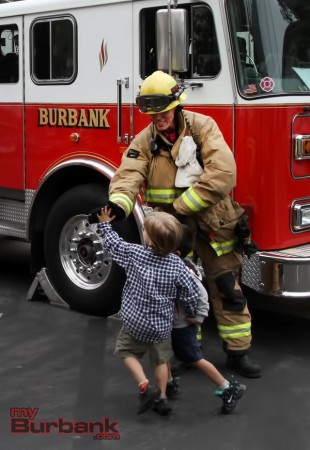 Two young boys give Firefighter Donan a high-five for completing the tall ladder climb. (Photo By Ross A. Benson) 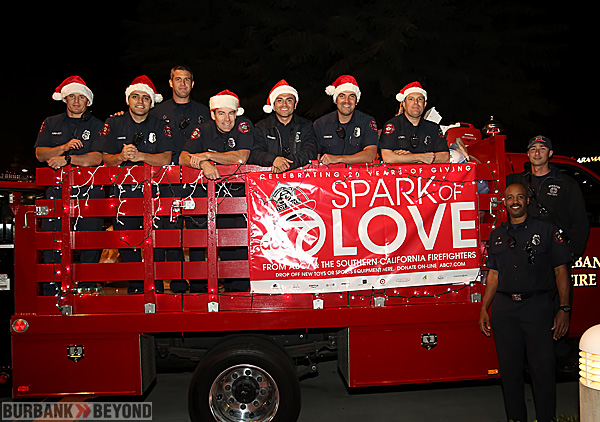 The Burbank Fire Department welcomed the Metrolink Holiday Toy Express to the Downtown Burbank Metrolink Station on Sunday, December 9. The train, carrying Santa and many of his helpers, will stop to help collect toys for the ABC7 and Southern California Firefighters’ Spark of Love Toy Drive.

The Holiday Toy Express is a 450-ton train decorated with over 50,000 lights which features a special car. For the past 16 years, the train has traveled all through Southern California making 41 stops annually, collecting gifts for underprivileged families, while sharing holiday family entertainment and music. Toys collected at the Burbank event will be distributed to children within Burbank.

In addition, the Weinerschnitzel Weinerwagon was at the event and served meals to everyone who brought an unwrapped toy for the toy drive. 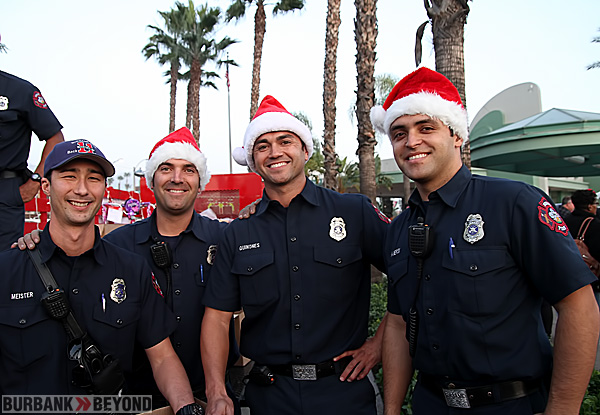 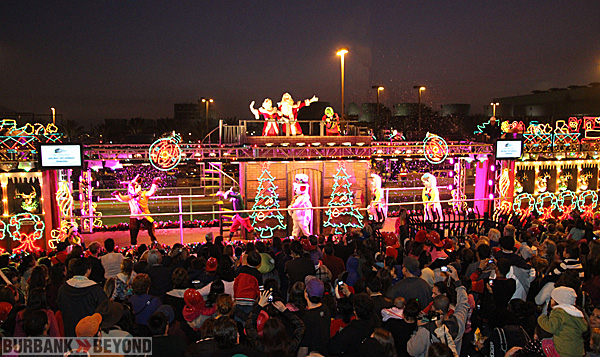 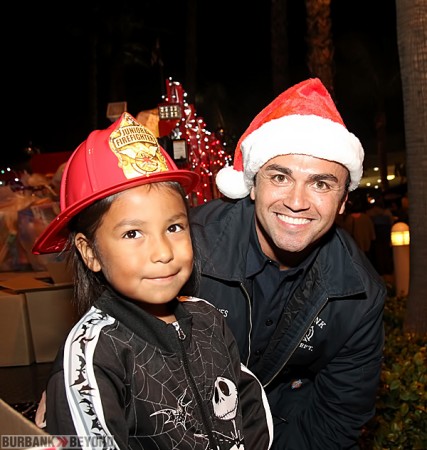 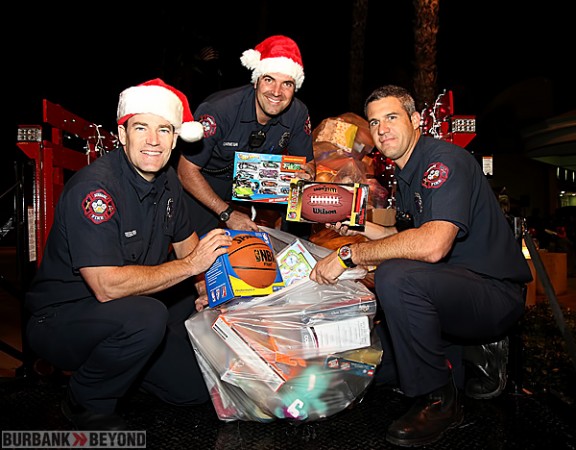 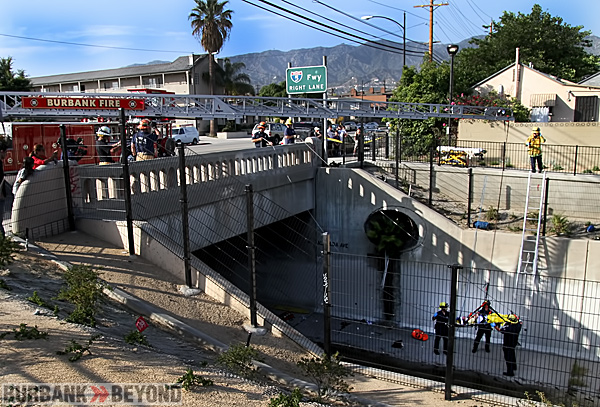 Upon their arrival the captain of Engine 15 requested a truck company to help with removing the injured person, due to the need for special equipment, such as a hoist  and a stokes basket. The man who was reported to be a 74 year-old Burbank resident,  either jumped or fell into the flood control channel.  The concrete-lined channel is approximately 20 feet below the street level.  Burbank police are continuing their investigation to determine what happened.

The victim was transported to LA County-USC Trauma Center with non-life threatening injuries, but in serious condition. The fire department’s operation was under the command of Battalion Chief Ron Barone.  Burbank Police assisted with traffic in the area during the rescue. 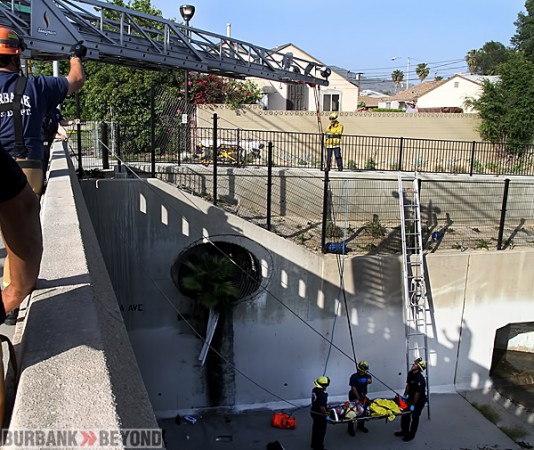 Burbank firefighters had to use specialized equipment to rescue a 74 year-old man from the flood control channel at Alameda Ave. near Victory Blvd. (Photo by Ross A. Benson) 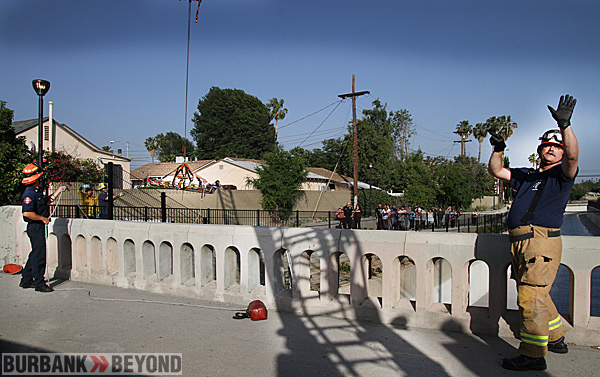 Burbank firefighters used special stokes basket after lifting this victim from the wash on Alameda Ave. east of Victory Blvd. (Photo by Ross A. Benson) 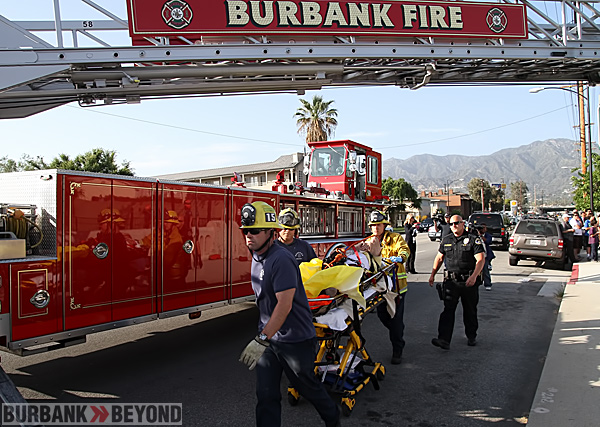 Burbank paramedics wisk away the man they rescued from the wash on Alameda Ave. east of Victory Blvd. (Photo by Ross A. Benson)