Congressman met with government class at Burbank High School last Friday after receiving letters from students in the class. myBurbank Photographer Edward Tovmassian was on hand to capture the sights of the visit. 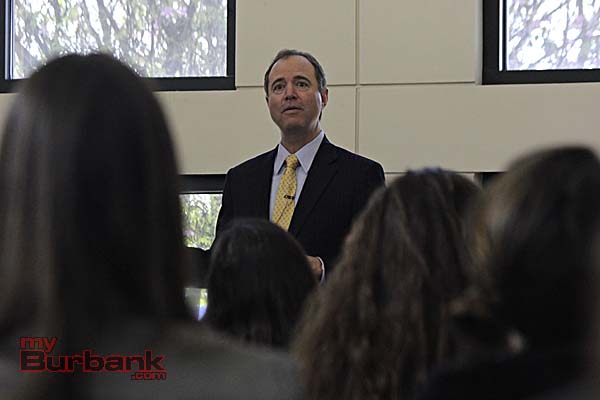 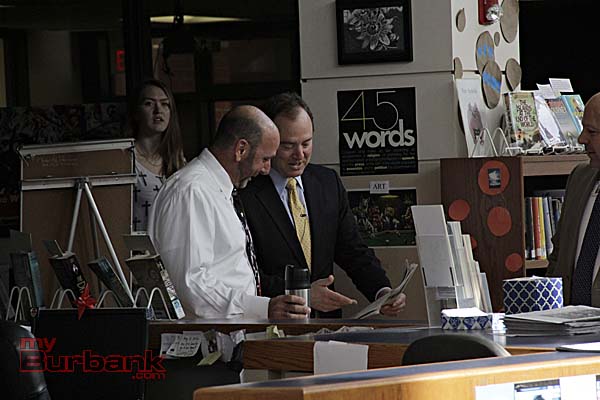 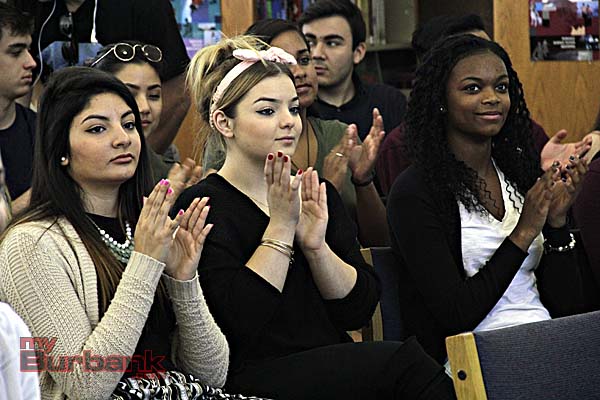 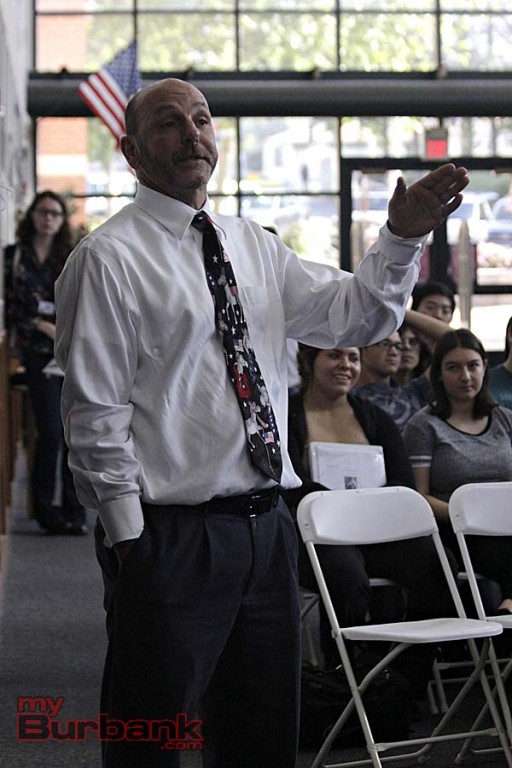 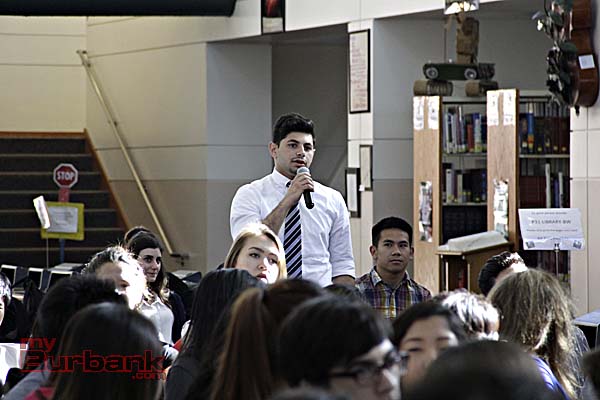 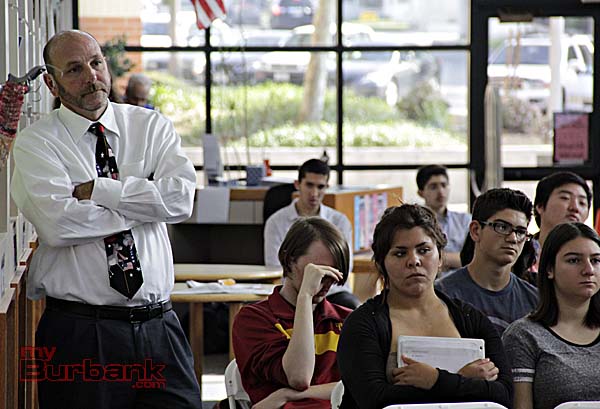 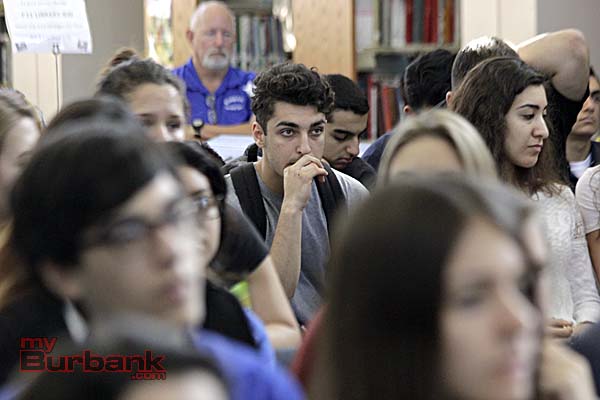 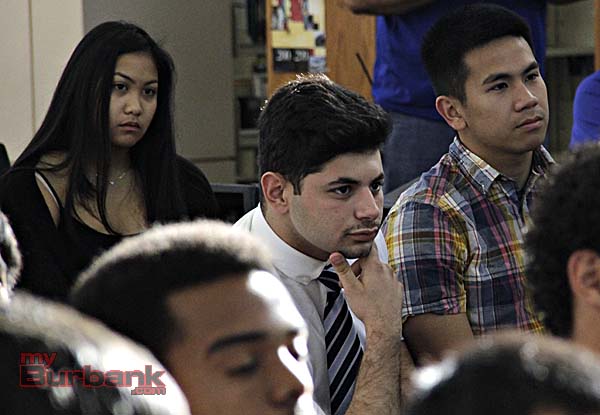 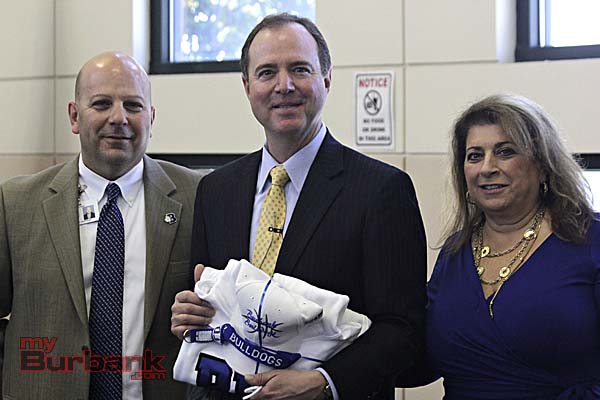 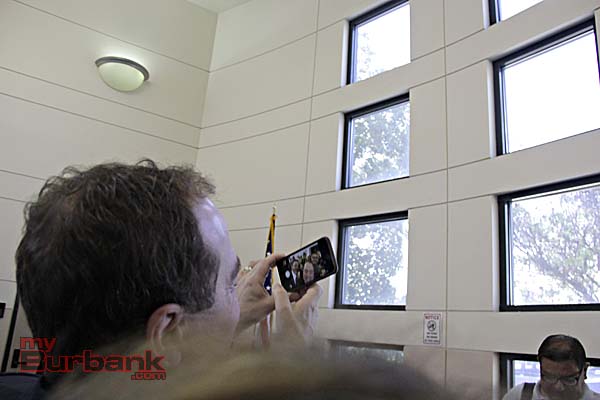 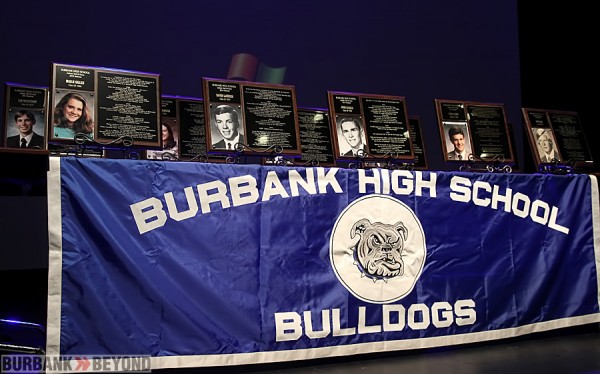 Burbank inducted 14 of its newest members into its athletic “Hall of Fame” last week in the school’s auditorium. Athletic Director Fred Cook organized the ceremony and welcomed 14 distinguished men and women who made a positive impact upon the Burbank High School community while playing or coaching sports. Ken Ziskin, Class of 1966 and Hall of Fame inductee in 2010, was the keynote speaker.

Here is a summary of their accomplishments: 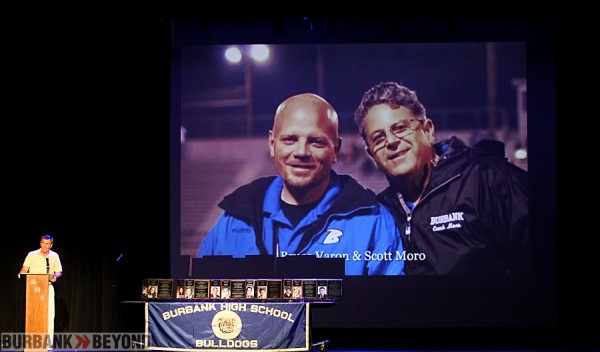 Frank Kallem, former Coach, honors the late Dr. Bruce Varon (right on slide) and current Burbank High athletic trainer Scott Moro (left). Dr. Varon, who graduated in 1975 and had been the team’s Doctor since then, passed away in May. (Photo by Ross A. Benson)

Dr. Bruce Varon was the Doctor for the Burbank High football team until his untimely death in May. He was a very popular and successful physician in the Burbank community.

Scott is currently the school’s athletic trainer. His outgoing personality and years of service to the Burbank High community has been a blessing to all.

Coach Richards came to Burbank High School in 1965 to teach and to coach basketball. He first worked as the sophomore coach and then moved up to the junior varsity. Wanting to be in charge of his own program Coach Richards had an opportunity to take over the tennis program a sport that he played  at Burbank High School and never looked back. That is how the legend began. Beginning in 1986 Coach Richards guided the tennis program to the CIF playoffs every year until he retired. During that span his home win record was an impressive sixty wins and two losses. He went undefeated in league for ten and a half years. That is 110 straight wins. Twelve out thirteen years he advanced to at least the CIF quarter finals. In 1993, he reached his coaching pinnacle by winning the division III CIF championship against Rigetti High School (21-3). During his tenure he coached three players that went on to play college tennis and 23 Foothill League Champions. Not only did he coach the boys’ team he also coached the girls team to three straight Foothill League championships 1992-1994.

For his thirty years of service to the students of Burbank. He served as the varsity boys basketball coach at Burbank High School for seventeen years (1958-1975). During his tenure, he and his players laid down the foundation of what would become one of the most successful programs in the area. He instilled in his players a strong work ethic and other life long skills that helped them develop into successful adults. Burbank High would like to thank you for your devotion, dedication, and time to our school. During his tenure as coach he won 2 league championships, up to that time the furthest any team has gone in the playoffs (semifinals), he coached twenty three all Foothill League players, three All CIF players and one All American. He all he coached 420 games with a record of 230 wins and 190 losses

Rick set the standard for distance runners at Burbank High School. He is the foundation of a strong distance running program that has spanned 40 years.  He was the first of our distant runners to win an individual CIF Varsity championship. He ran varsity track and cross country for three years.

John was a three year varsity starter on the basketball team. Without the three point line in his playing days, John is one of the top scorers in school history, scoring close to 1,000 points.

David has the honor of being Burbank High School’s only basketball All-American. This is an unbelievable accomplishment for a school that has had many outstanding players. David was a two year varsity starter in basketball and was a member of the track team.

Bruce is the only Burbank High athlete to be All American in both water polo and swim. Bruce has the bragging rights to be on a swim and water polo team that never lost a game in the Foothill League. He lettered varsity in both sports all three years.

Jeff is one of our most honored high school athletes. He made his name in the pool. He participated in both water polo and swim. At one time he held six school records. Jeff holds eight Foothill league championships.  To date he still owns one, the 100 yard freestyle with the time of 47.80. He has the distinction of never losing a league race in three years in the Foothill League.

Ken is simply known as “Super Soph” at Burbank High School. He was a three sport athlete. He was a three year varsity Letterman in three sports, football, basketball, and track. During his high school track career Ken was a member of the track team that went undefeated in league all three years. It was on the football field where Ken did most of his damage. He is still ranked in many of our football top ten offensive categories at BHS. 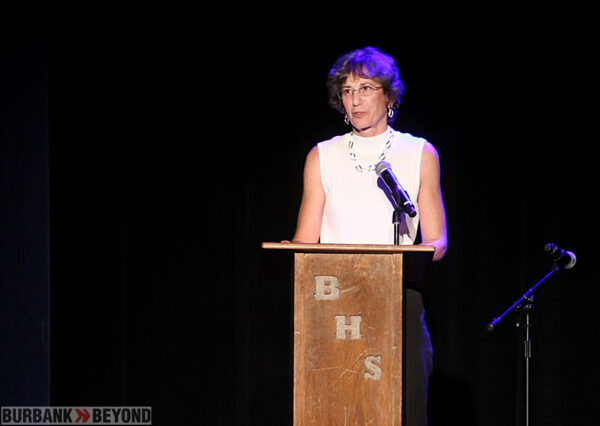 Louise Gronich, class of 76, thanks the school for the honor. (Photo by Ross A. Benson)

Louise was an early pioneer in girl’s athletics at Burbank High School. She was our first female athlete to earn first team All CIF honors in any sport. Through her efforts gathering signatures and petitioning the administration basketball was added to girls’ sports.

Marji ran to fame on the track.  To date she is the school’s only All American and CIF champion in track. At one time she had the best triple jump mark in the United States with a jump of 39’2 1/2 ’, which still stands as Burbank High School record.

Following in the footsteps of many great runners before, Todd gained his fame in cross country and track. He is one of two runners from Burbank High School to be a CIF champion in both track and cross country. He is a member of the big three club at Burbank High School which means he has times that put him in the top ten for the 800, 1600 and 3200 races. 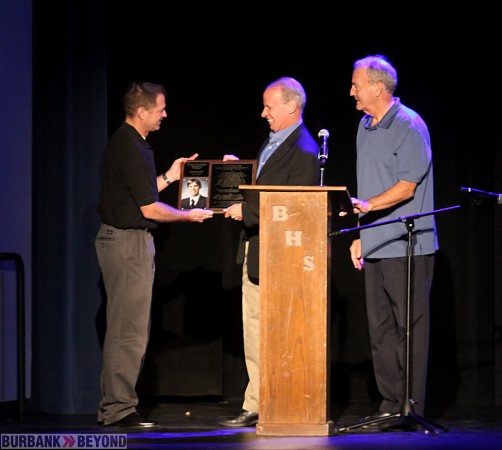