The Burbank High School Theater program presents Alice in Wonderland, a play geared for young audiences but engaging for all ages, for several weekend shows Friday, October 4, through Saturday, October 12.

Based on the Sharon Holland adaptation of Lewis Carroll’s book Alice Through the Looking-Glass, drama teacher Donovan Glover hopes “that every child (of every age) in Burbank will come enjoy this unique production.”

In fact, Friday morning, October 4, Burbank High’s Wolfson Auditorium was filled to capacity with students from neighboring elementary schools who walked there to enjoy the show. Fourth- and fifth-graders from Washington, Jefferson, Emerson and Miller elementary schools participated in the field trip and received a voucher to return for another performance. 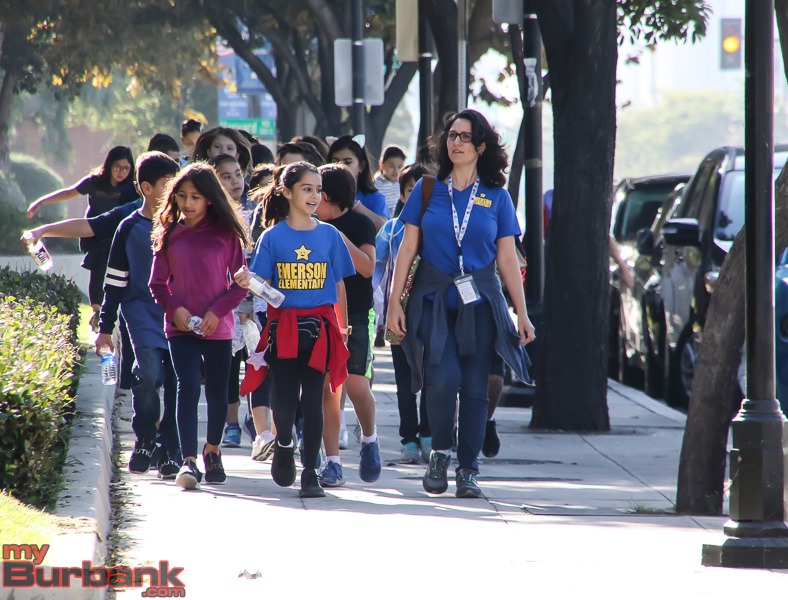 The setting of Wonderland has been extended into the lobby entrance to help attendees easily jump through the doors into the world of Wonderland.

“In the past couple years, we’ve explored musicals, Commedia del’arte, heavy dramas and original works, but this is our first foray into children’s theater,” explained Glover. “Lewis Carroll’s novel has so many intriguing characters, and Sharon Holland’s script adaptation is both faithful to the spirit of the novel, but also relatively simple and fast-paced.”

“It has allowed us to ‘play’ with so much creativity in movement, songs, costumes, lighting and other shenanigans,” he added. 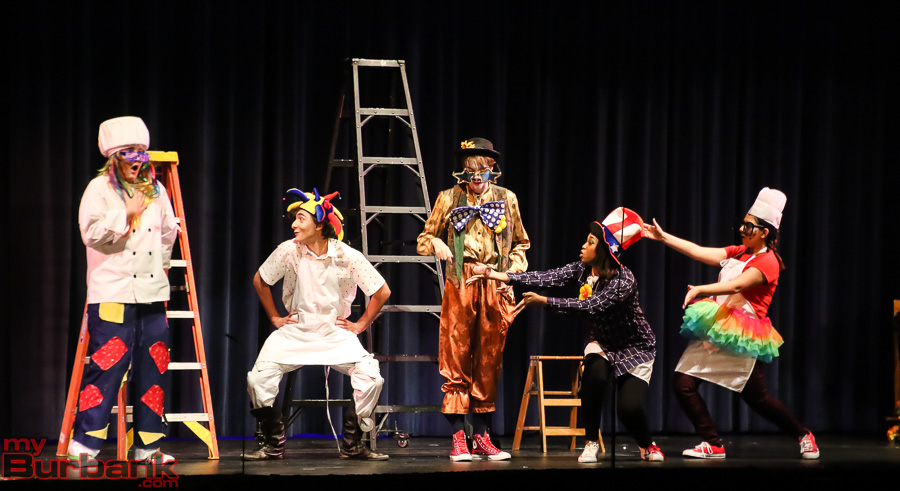 “A lot of things in theater make no sense, but in Alice in Wonderland, nothing makes sense,” commented senior Leah Tahmassian who plays the caterpillar. “That is why this play is the most zany and rewarding experience for any actor.”

“Being in this production with a group of talented individuals is so amazing because I get to watch so many people be silly for the enjoyment of others, and it is the perfect break from the harshness of reality,” she added.

“It is a pleasure to work with such a diverse and talented cast,” said junior Parker Brightman who portrays the White Knight and one of the many cooks. “The White Knight is a character that demands lots of physical comedy and there is not a moment I am not moving around the stage. This gives me tremendous freedom as an actor to be creative.” 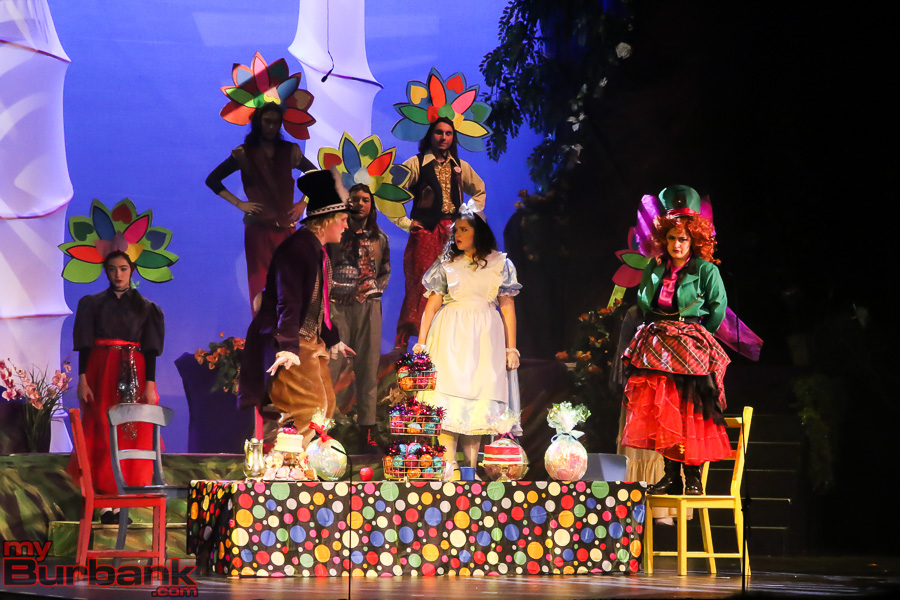 “Our tech crew has done an amazing job with lighting and scenery,” he also said. “They have been able to transform the Wolfson Auditorium into a whimsical world of fun and excitement.”

“One thing I like about this show is that every single cast member has their own ‘moment of shine’ and at least once during the play the spotlight is on them,” commented junior Faris Jalilov, an ensemble member who plays the hedgehog, part of the caterpillar, part of the jabberwock and a flower. “I also like how instead of just a tool, the hedgehog has turned into an actual character with his own life and feelings.”

“Being a part of a cast filled with many talented actors and directors is always such an honor,” said senior Jen Nash, who portrays the titular character. “Everyone has helped me grow as a person and as an actress. Being Alice, I really have to listen to the child inside myself and let my imagination run wild.” 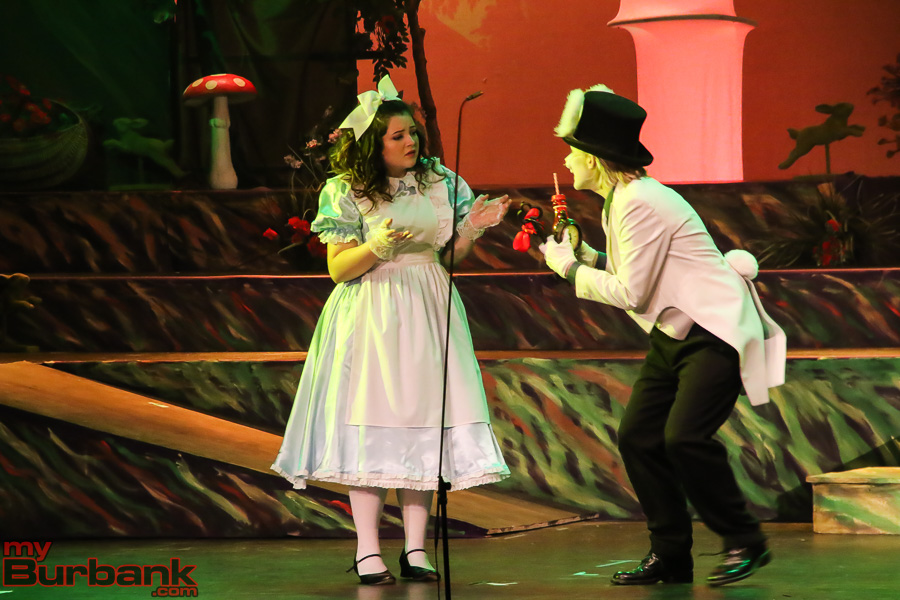 “Like Alice, I wish the world was one big wonderland. A place where we all could get away from our responsibilities, and trust a White Rabbit to take us into a dimension full of innocent madness. A place where even an adult feels like a child again.”

“Alice claims that she ‘doesn’t want to go among mad people,’ yet she’s constantly chasing after that madness and running away from what is normal,” Nash added. “That being said, encourage this world to be more like Alice – it’s never too late.” 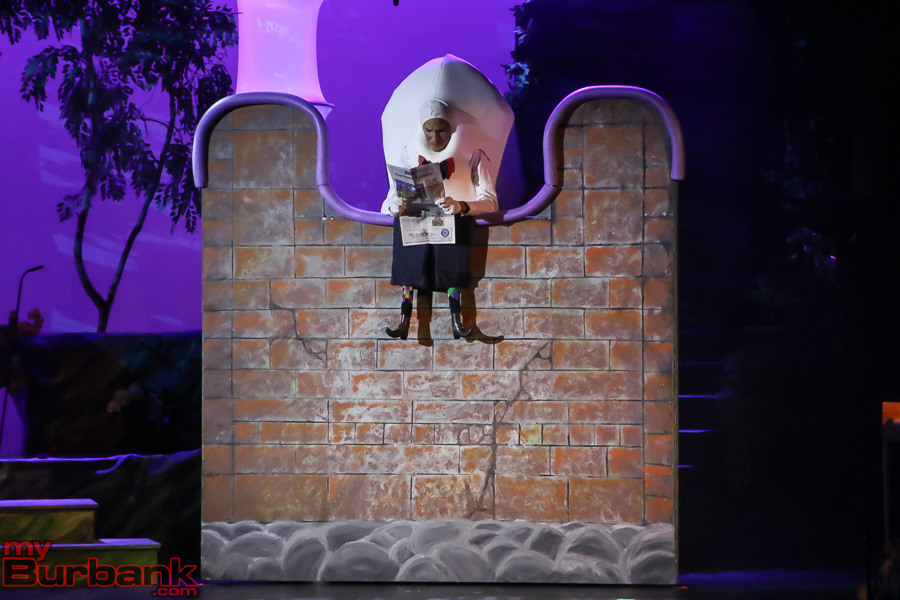