Cold, tired, and full of stories, 10 electrical linemen from Burbank Water and Power (BWP) returned from New York’s Long Island after restoring power to hundreds of residents who had gone without electricity for up to 8 days. After witnessing the destruction of
Superstorm Sandy, the Burbank Crew returned home in time to spend Thanksgiving with their families and loved ones.

“I was so moved to see row after row of utility crews from across the United States there to help.” said Andrew Harmon, Line Mechanic Supervisor for BWP. “You could see it in their eyes, people were so happy to see us and we were proud to be there to help.” Burbank banded with Anaheim, Pasadena and Riverside to combine resources and send help to Long Island Power Authority to restore power to thousands of impacted residents in the wake of Superstorm Sandy.

High risk equals high reward. Each year lineman from throughout California strap on their jeans, leather gloves, hard hats, and steel spikes to test their skills in a competition of speed, accuracy, safety, and intelligence in the Los Angeles Lineman’s Rodeo. It used to be ranch versus ranch, now it is power utility versus power utility. 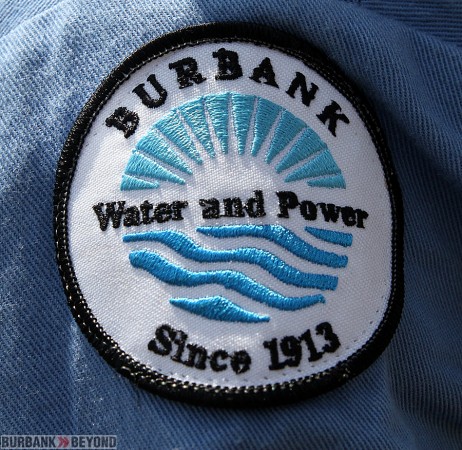 Burbank Water and Power (BWP) employees can claim bragging rights after taking home several trophies, including several first place finishes in the “Apprentice” competition, at the Annual Los Angeles Lineman’s Rodeo. The winners were recognized at a recent ceremony at Burbank’s City Hall.

“The guys take it seriously and have fun doing it. There is a lot of pride involved,” said Tom Wilke, Electric Distribution Supervisor for BWP who also oversees the apprentice training program. “A lot of practice goes into it. Every event is based upon what could happen out on the field.”

The electric lineman is the image we see tethered to a pole high above the ground in windy and rainy conditions, harnessing the power of electricity and corralling it into a wire. These are the people who make sure electricity is being transferred from the generating plant to our homes and businesses. 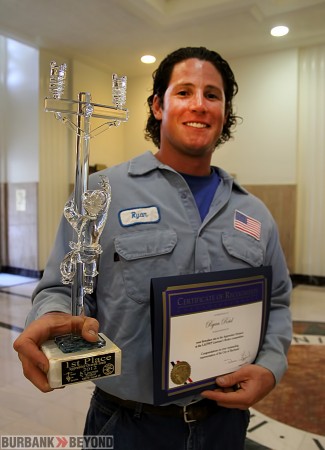 More than 25 teams from across Los Angeles converged upon Los Angeles Department of Water and Power’s (LADWP) Truesdale Training Center in Sun Valley on April 28 to determine this year’s champions.

Hosted by LADWP and International Brotherhood of Electrical Workers (IBEW) Local 18, the annual event showcases the extraordinary skills and physical abilities that power utility workers, such as those who work for BWP, use every day to keep power on for residents and businesses in Southern California.

The event is divided into two categories: Apprentice and Journeyman competition. Judges determine the score for each event based upon time completion and efficiency.

The Apprentice competition includes workers who are currently in training at their respective jobs. To become a journeyman at BWP, apprentices must train for three-and-a-half years preparing to deal with 4,000 or 12,000 volts on a daily basis.

“Our guys go through a pretty strenuous program,” Wilke said. “We hire good guys. We know what type of person we are looking for.” 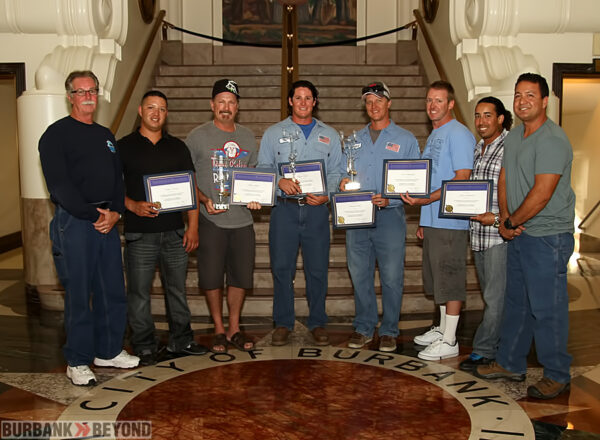 The Apprentice competition consisted of five events: Apprentice Written Test, Sidewalk Guy, Transformer Jumper, Hurt Man Rescue, and Pole Climb. It not only tested the participants’ skills, but also their intelligence. BWP’s sole apprentice team, consisting of Ryan Reid and Cody Cessna, came back from the event with several awards including first place in the Sidewalk Guy and Transformer Jumper events, second place in the Pole Climb event, third place in the Hurt Man Rescue event, and they topped it off when they were awarded first place in the overall category. 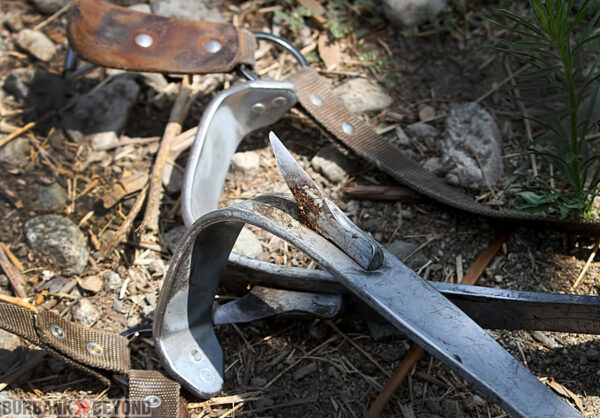 Climbing Spikes, a climbers second set of legs. (Photo by Ross A. Benson)

“I was excited that’s for sure,” said Reid, who has won the overall Apprentice title the last two years. “I had an idea because we were doing well throughout the day. There is a ton of pride and we love our jobs. We wanted to bring it home for BWP.”

In the Journeyman competition, teams of three Journeymen (two people on the pole, one on the ground) participated in five challenging events including Dead-end Change, Crossarm Change, Switch Change, Emergency Response Hurtman Rescue, and Pole Climb. BWP had two Journeyman teams in the competition.

Both teams performed at a consistent high level throughout the individual events resulting in a second place overall finish by the team of Howard Hull, Tim Pedersen, and Adam Lewis while their counterparts Kris Bomdahl, Edison Rosas, and Jason Edwards placed fourth overall. Both teams received perfect scores for the entire competition resulting in tiebreaker ranking via their overall accumulated times. 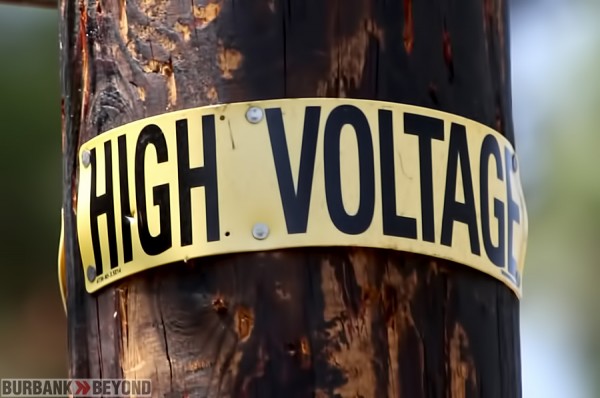 “We are successful because of the way we run our apprentice program,” Wilke explained. “Everything we do is under the supervision of journeyman. We’ve been doing this for some time now.”

LADWP employee Ted L. Dario founded the Lineman’s Rodeo in 1991 to provide a forum where linemen could receive recognition for their technical craft skills. It also presents the opportunity for linemen to focus on the importance of safety and safe work practices.

Each year, the winning teams of local rodeos are given the opportunity to participate in the International Lineman’s Rodeo competition held in Kansas City, Missouri, on October 13. Teams from the United States, England, Australia, Canada and Jamaica compete for the honor of world’s greatest lineman. The Rodeo has grown to over 200 teams and 250 apprentices.

“I would like to go,” Reid, 25, said. “I want to represent my utility and show how good Burbank is.” 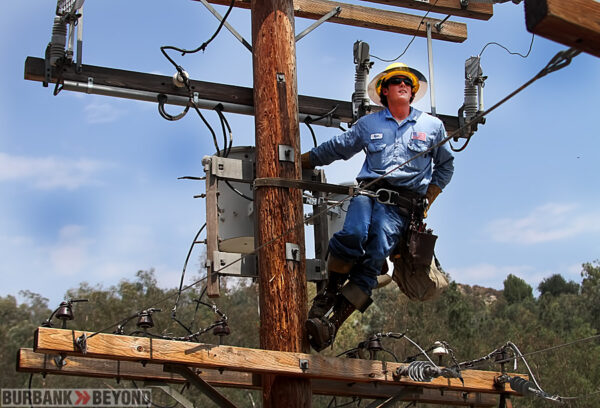 High above it all and working on power lines is Burbank Water & Power’s Ryan Reid, this years Linesman’s Rodeo first place champion. (Photo by Ross A. Benson)

Assemblyman Mike Gatto (D-Los Angeles) is pleased to announce that Burbank Water and Power has been awarded a $1 million grant for grid system research from the California Energy Commission. Gatto supported the grant.

“The research will help develop a comprehensive and secure grid system for California,” Gatto said. “I am extremely pleased that $1 million dollars will be coming to Burbank Water and Power.”

The funding will help BWP save energy, keep rates low, and improve the delivery of services. The California Energy Commission’s PIER program supports public interest research and development that helps improve the quality of life in California by bringing environmentally safe, reliable, and affordable energy services and products to the marketplace.

Funding comes from the Energy Commission’s Public Interest Energy Research (PIER) program. The Commission’s award is a contribution to BWP’s $20 million American Recovery and Reinvestment Act award from the U.S. Department of Energy. BWP will be providing $39 million in matching funds. The total cost of the project is $62.7 million.

Burbank Water and Power’s (BWP) citywide Smart Grid initiative in Burbank will allow the city and its residential customers to take advantage of evolving technology and innovations in water and energy.  One of these innovations is now coming to fruition through the introduction of an Early Adopter Time of Use Billing option for Electric Vehicle (EV) Owners.

As gasoline prices remain well above $4.00 per gallon, Burbank residents now have an alternative to gas prices at the pump. “EV owners in Burbank have been asking for a Time-of-Use (TOU) rate because they want to maximize their savings and charge their EV when electricity prices are at their lowest” says Joanne Fletcher, BWP Assistant General Manager. “With Burbank’s enhanced smart infrastructure, we can now offer this money saving opportunity.”

The Early Adopter TOU price reflects the fact that the cost to provide electricity changes throughout the day. When demand is low, less expensive sources of electricity are used. When demand rises, more expensive forms of electricity production are called upon, making prices higher. The Early Adopter TOU offers prices as low as eight cents per kilo-Watt hour (kWh) for electricity used during the evening after 11 pm, perfect for electric vehicle owners looking to charge their vehicles  while they sleep  and be ready to hit the road in the morning.

BWP’s standard residential electric rate is based on a three tier system where the price per kWh increases the more electricity is used.  The tiers start at 11 cents for the first 250, 15 cents for the next 250, and 17 cents per kWh for electricity used beyond 500 kWh.

Nissan indicates that their LEAF EV takes 25 kWh to fully charge and drive 73 miles. At eight cents per kWh, this translates to $2.00 to charge the LEAF or about 2.7 cents per mile. Comparatively, a consumer with a gasoline powered vehicle paying $4.25 per gallon and getting 30 miles per gallon would pay $0.14 cents per mile, more than five times the EV cost to use electricity.

EV ‘range anxiety’ is another important issue BWP is addressing. “We heard from EV owners that more public chargers are needed to secure public confidence in a state where many drivers commute long distances for work and recreation.’” says BWP General Manager Ron Davis. In December 2011 BWP unveiled 11 electric vehicle charging stations in public locations throughout Burbank. “We hope these chargers will send an important signal to our community and surrounding areas: Buy an EV, drive it to and inside Burbank, and don’t worry about running out of electric charge in our city.” adds Mr. Davis.

The EV charging stations, manufactured by Coulomb Technologies and operated through the ChargePoint America Network, feature the latest technology, such as text or email notifications to the driver when charging is complete. The ChargePoint America Network, which includes the 11 Burbank charging units, makes plug-in electric vehicle use more convenient for drivers. Both on-line and through a mobile phone application, EV drivers can  locate and, in some cases, reserve available public charging stations, track energy usage and greenhouse gas savings, and  view account history.