Both will find a tougher road in 2017 as they have been moved up after the CIF Southern Section released its Fall playoff groupings Thursday.

In football, Burbank has jumped up one division and will be one of 23 teams competing for a playoff spot in Division 7.  Yorba Linda, which defeated the Bulldogs 31-21 for the Division 8 title last year also moved up to Division 7. 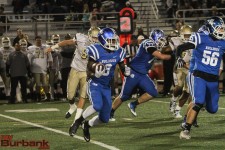 Burbank High’s Darnell Williams hopes to lead his team far into the CIF Southern Section Division 7 playoffs in 2017. ( Photo by © Ross A Benson)

Burroughs, which missed the playoffs a year ago, was the lowest-ranked football team to be placed in Division 8. The Indians will be one of 25 schools competing for one of the 16 playoff spots in the division.

In water polo, Burroughs will be one of 36 teams that will fill a 32-team bracket for the CIF Division 3 title. Burroughs won the Division 5 title last year and is expected to return much of its team.

Burroughs girls’ volleyball team, which is led by 6-foot-4 senior Marin Grote, was placed in Division 3. Burbank High will play in Division 4.

Young, but experienced is the best way to describe the Burroughs and Burbank High boys’ water polo teams as they enter the 2016 season.

Both teams figure to face tough competition in the Pacific League as Crescenta Valley and Hoover are deep.

Burroughs coach Jacob Cook has reason to be optimistic. Last season the Indians went 13-12 overall. His two leading scorers from a year ago return from a team that finished third in the Pacific League and lost 14-12 to Santa Monica in the first round of the CIF Southern Section Division 4 playoffs. Burroughs defeated Atascadero in a wild-card playoff match.

Junior Marko Vucetich scored 73 goals as a sophomore and was a first-team All-Pacific League pick. He also spent the summer training in Serbia, the nation that won the gold medal in water polo in the recent Olympics. 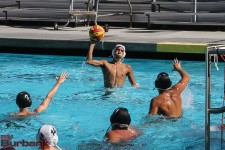 “We have 18 guys and we didn’t lose any of our major talent (from last season),” Cook said. “We’re looking forward to a good year. We’re trying to go as far as we can in CIF. Our expectations are high.

Senior Jerry Solano, a set defender, is the team captain.

“He shows a lot of leadership skills,” Cook said. “He keeps the team focused.”

Sophomore Eric Aperian, a left-hander, has shown lots of promise.

Junior David Jimenez figures to be the starting goalie.

Senior LJ Burns is expected to be another key player for Burroughs.

One of those is senior goalie Peter Youssef.

“I can already see the change in this year’s team compared to last year,” second-year coach Allyson Young said. “These boys are working together and helping each other out in the pool. It’s great to see that the boys are there for each other in the water. This is a very young team. We are building the team up to be able to accomplish anything that they want to in the sport. Hopefully these boys continue to work together and this season can go as planned.”