But don’t take this to mean that hitters weren’t in trouble when facing the sidearm throwing, 5-foot-9 right-hander, who helped the Indians claim the Pacific League title two years in a row.

“I think my success came from just working every day and trying to prove myself to everyone,” said Nicol, who went 7-2 with 66 strikeouts, 14 walks in 56 and two-third innings while posting an impressive 1.48 earned-run average his senior year.

The Indians, who went 19-7 overall, 12-2 in league action for a share of the title this past season, lost in the opening-round of the CIF Southern Section Division II playoffs, but Nicol was nonetheless recognized for his outstanding work. 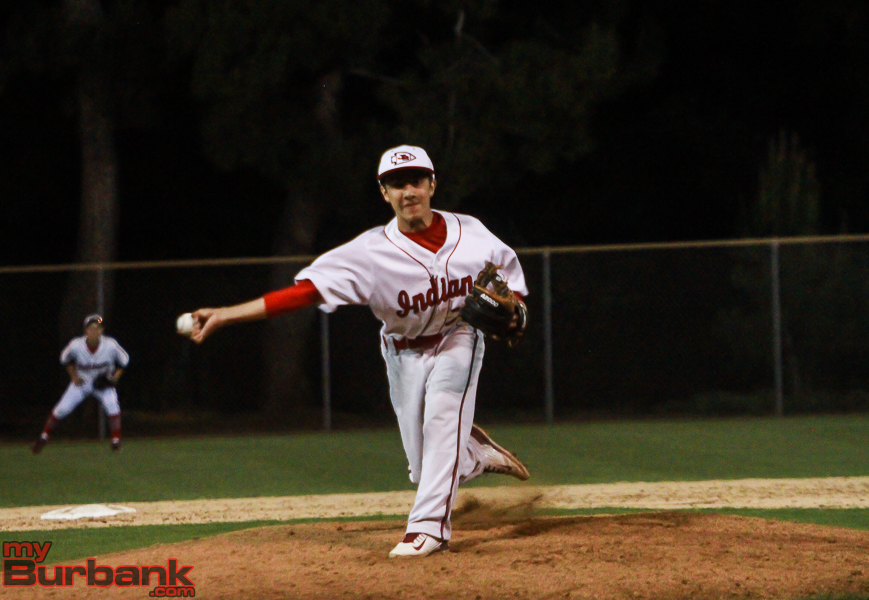 Burroughs pitcher Kyle Nicol received a lot of attention after beating Harvard-Westlake 1-0 to win the Easton Tournament championship. (Photo by © Ross A. Benson)

Nicol, who will attend Cal State Northridge where he will pitch, was named to the All-CIF second team, was the co-league Player of the Year, and will participate in the CIF Southern Section versus City Section All-Star game.

Nicol doesn’t throw especially hard, but was still able to be highly effective.

“My best pitch varied each day,” Nicol said. “When the slider was working, it was by far the most fun to throw.”

A night game in March at Birmingham High was the outing that catapulted Nicol, who probably throws in the mid-80s, into the forefront.

“The game that stands out the most was the Easton Tournament championship against Harvard-Westlake for me personally and for the team,” Nicol pointed out. “It got me a lot of attention from Division I coaches and it put Burroughs baseball on everyone’s radar.”

That game, against the always excellent Wolverines, was a 1-0 complete-game masterpiece as Nicol recorded 14 strikeouts with two hits allowed. 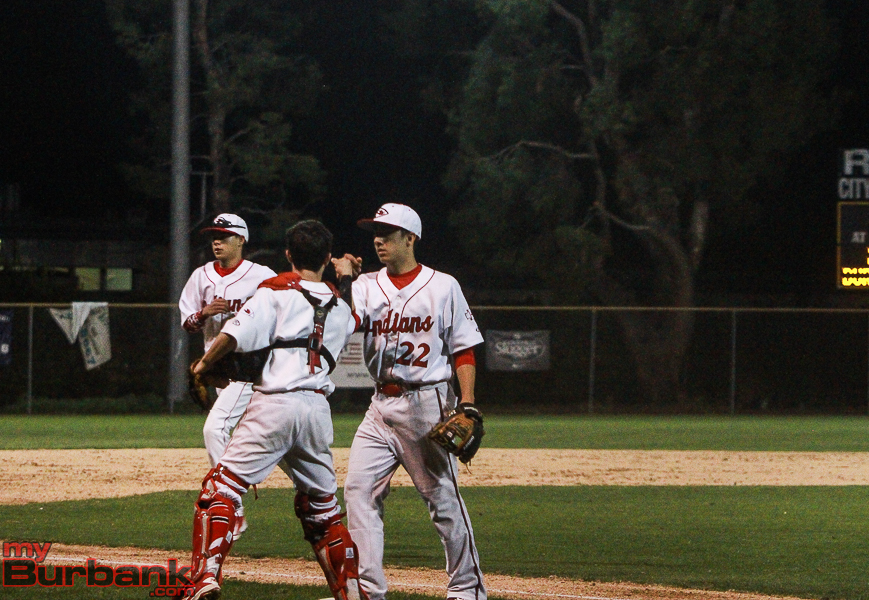 Nicol (#22) after knocking off the Wolverines in the Easton tourney. (Photo by © Ross A. Benson)

How did Nicol, named to the Daily News All-Area first team and the Glendale News-Press and the Pasadena Star-News league Player of the Year, develop his somewhat unusual pitching motion?

“Coach [Craig] Sherwood introduced me to pitching sidearm before high school and coach [Ryan] Matheson worked with me since my freshman year and throughout my four years at Burroughs,” Nicol noted.

When asked what big-league hurler Nicol most resembles, he said that it was an Angels reliever.

“The throwing motion is somewhat like Joe Smith’s with the submarine and sidearm angle,” he said.

Nicol’s next hurdle is facing college hitters, who are more advanced, technically sound and more mature than high school batters.

“I think college baseball will come with a lot more challenges,” Nicol said. “It’ll be fun pitching for some of the best pitching coaches in the country and seeing how I can improve.” 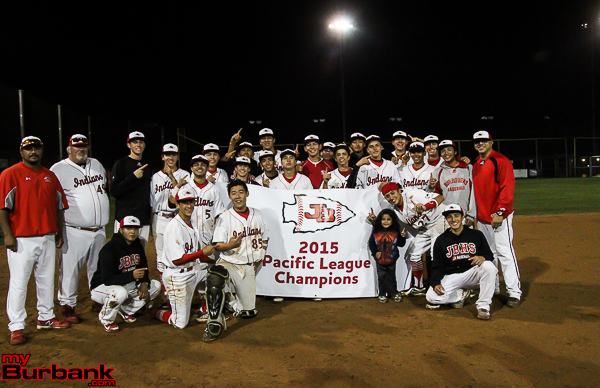 Nicol joined his teammates after the Indians claimed the Pacific League banner in 2015. (Photo by Ross A. Benson)

Nicol, who was a relief pitcher before his senior campaign, said he focused on the job at hand and didn’t try to over think the situation.

“The crowd never entered my mind when I pitched even with always pitching on the road games,” Nicol said. “Some of the more important games would make me a little nervous, but the adrenaline helped more than anything.”

According to Nicol, whether he faced city rival Burbank or a weaker opponent like Glendale, he always wanted to shed the burden of expectations.

“I tried to treat every team the same before every game and not act any different towards a team,” he said.

For the most part, this formula has proved to be a winner, and one Nicol will take with him to the next level.