Burbank Leader: When will we see features on Burbank School Board candidates Char Tabet, David Dobson, and Larry Applebaum in the Burbank Leader?

On March 22nd, the Burbank Leader posted an entire column on Steve Ferguson. It’s now been over a week and there are no features on the rest of the School Board candidates. With the election in less than two weeks, time is running out. To decline to show the same courtesy to these candidates would be neglectful at best and biased at worst. As a community paper, they are doing a great disservice to the community.

Burbank residents will be asked to vote in two elections that are extremely important for the City of Burbank.

The City Council will have many issues in the next two years such as the police litigation, a search for a new Police Chief and City Manager, as well as budget concerns while the School Board will be putting to use the $110 million bond issue that was passed earlier this month, besides all of the budget concerns facing the schools.

BurbankNBeyond is in the process of preparing a series of questions that will be sent to all candidates in both races.  We will publish all of their responses for you to read and hopefully give you an opportunity to make up your OWN mind on the issues that effect you and your way of life in Burbank.

BurbankNBeyond staff had talked about endorsements but have come to the conclusion that an informed public is far better then a news outlet TELLING you whom to vote for.  You should always look at all endorsements closely and ask yourself if the person or group endorsing have any connection to Burbank.  Is it a Burbank resident or organization in Burbank endorsing or is it an outside business, party, or political committee trying to influence votes, including outside news agencies.

This is your chance to get the answers to the questions that you want to hear.  We will not use your name, but we do ask that you live or have a business IN Burbank.

We will have the right to condense or reject any questions, but that is not our intent.

We want you involved in this election!  We want you to cast that vote!  Let the candidates know that you are engaged and care!

Please send your questions to questions@burbanknbeyond.com by Sunday, March 24.  We will send them out to the candidates on March 25 and hopefully publish their full, unedited comments around April 1 (no fooling!). 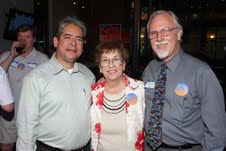 Many members of the community joined City Council Candidate, David Nos to show their support in his run-off for a council seat. The fundraising event was held at the Gordon Biersch restaurant on Wednesday, March 13th. Council Member –Elect, Bob Frutos, showed his support of Nos by asking everyone to Vote and to do the same .

I am gratified and humbled beyond words at the outpouring of the support and confidence you have shown me in our primary election. I truly feel I am blessed, not only to live in a wonderful city like Burbank, but also to have the affection and backing of the residents I will serve with pride and dedication.

Ours is a special city, a place we gratefully call home and raise our families. Every resident and business owner deserves an open,committed, active and caring city government and on the city council, I pledge you my total effort and energy towards that goal. Your concerns are mine. Your future is intertwined with mine. As I met many residents walking door to door, I heard your concerns regarding runaway development and traffic congestion. As your next councilmember, those concerns will be my priorities.

Thank you for your support and your belief in my determination to do whatever I can to make Burbank an even better place for us all. I am your public servant, your voice on the city council. I will be there for you, and available to you.

Thank you, friends and neighbors, for making my dream of effectively and honestly serving Burbank a reality. I want to make a positive difference, and I will not let you down!

Editor’s Note: Bob Frutos was voted onto the City Council February 26 receiving over 50% of the vote.

It was an election night that sometimes seemed like a crawl instead of a race, but in the end ballots were counted and candidates knew where they stood as the General Election looms in April. 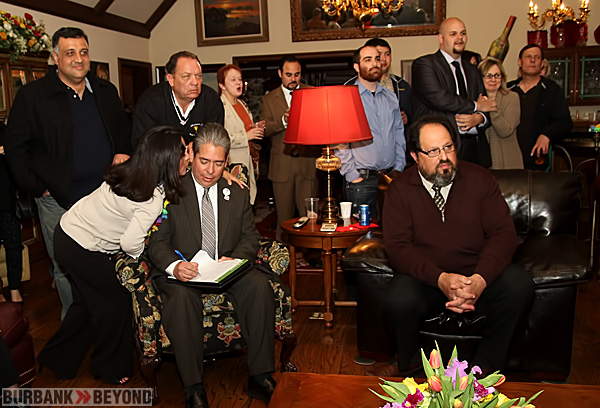 As the results come in Laura Frutos whispers congratulations into her husbands ear, as City Councilman Dr. David Gordan watches the results with other supporters and candidates. (Photo by Ross A. Benson)

In the City Council race which has all three incumbents running, it was an outsider, Bob Frutos, who was the only candidate to receive more then 50% of the vote was elected outright to a four-year term starting in May.

Councilmen Dr. David Gordon, Jess Talamantes and Dave Golonski all received less then 50% of the vote and will compete with David Nos for the two remaining seats which means at least one and maybe two current councilmen could be voted out of office. 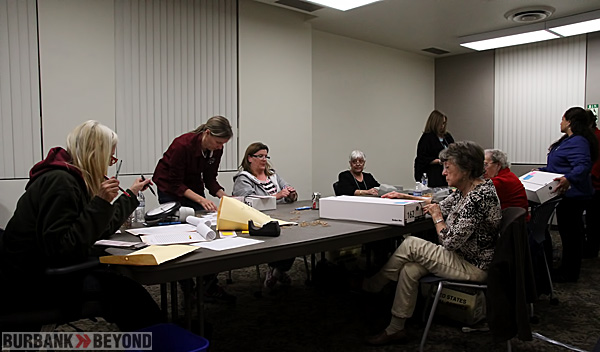 In an office in the City Clerks office, several people gather ballots and time stamp them as they prepare them for counting. (Photo by Ross A. Benson)

Tuesday’s win was vindication for Frutos, who lost in the General Election two years ago to Emily Gabel-Luddy by the slim margin of 86 votes.  Weeks later, the Council voted 3 to 2 (with Gary Bric and David Gordon voting no) to remove the long time Los Angeles Police Officer off of the Burbank Police Commission in a move that many believed was in retaliation for his council campaign with Gabel-Luddy, Talamantes and Golonski all voting to oust him. 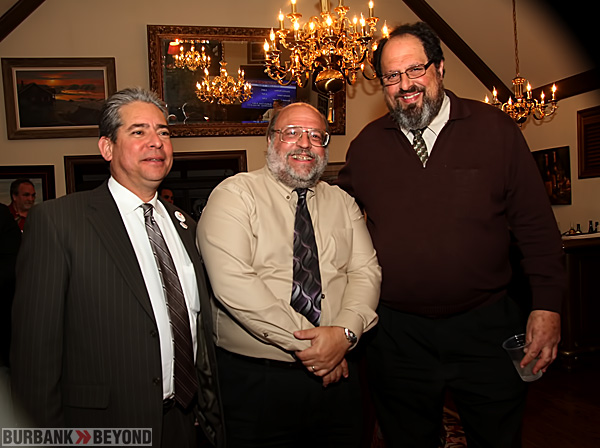 Bob Frutos, Burbank’s newest City Councilmantalks with School Board member Larry Applebaum and Councilman Dr. David Gordon, who will be in the general election for a possible seat on the school board and City Council at an election party held Tuesday evening at former Mayor Mary Lou Howard’s home (Photo by Ross A. Benson)

In the Burbank School Board race, incumbent Larry Applebaum received more votes then any other candidate as he picked up 4,451 votes but did not cross the 50% threshold meaning that he will move to the April General Election.  In a heated race for second place, only 166 votes separated Charlene Tabot, Steve Ferguson and David Dobson who will all join Applebaum in the April contest for two open seats.  Armond Aghakhanian just missed the run-off by a 119 votes.

Zizette Mullins received over 50% of the vote and was elected City Clerk while Debbie Kukta ran unopposed.  Both were appointed last year by the City Council. 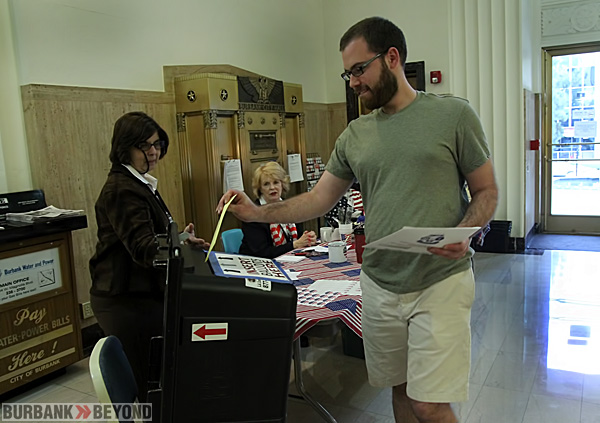 There were a total of just 9.811 votes cast in the all-mail election, although many ballots were walked into five locations in the final few days which led to delays in counting ballots Tuesday night. 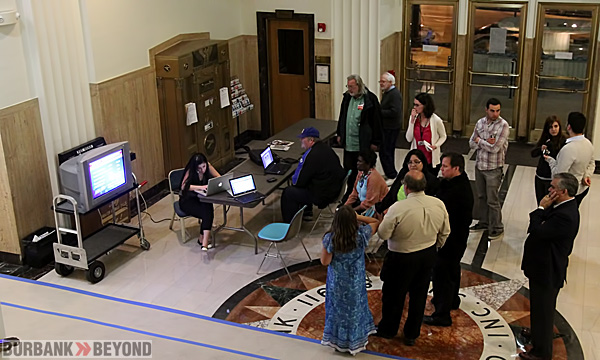 Waiting for results in the City Hall Rotunda are candidates, media, and other residents . (Photo by Ross A. Benson)

All six candidates for Burbank’s City Council were on hand Wednesday night at the Colony Theatre in a forum sponsored by the Burbank Chamber of Commerce and Leadership Burbank. 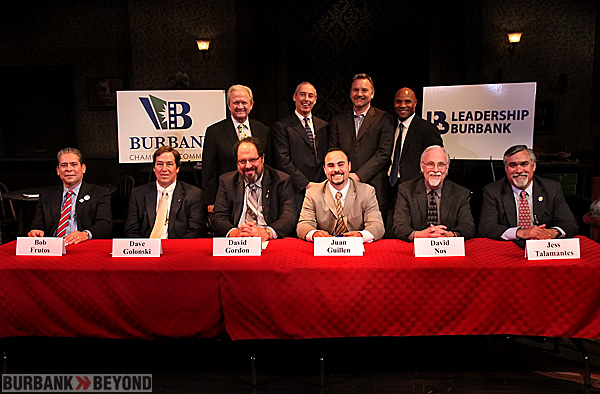 Questions ranged from current, as well as future budget concerns and the issue over up coming construction on the I-5 and the closing of the Burbank Blvd.bridge.

Also brought up was the Bob Hope Airport and the subject of the new terminal that will dominate the news in the next few years.  Candidates were also asked about how to better involve Burbank residents in the election process with returns usually only reaching 15 percent of the eligible voters. 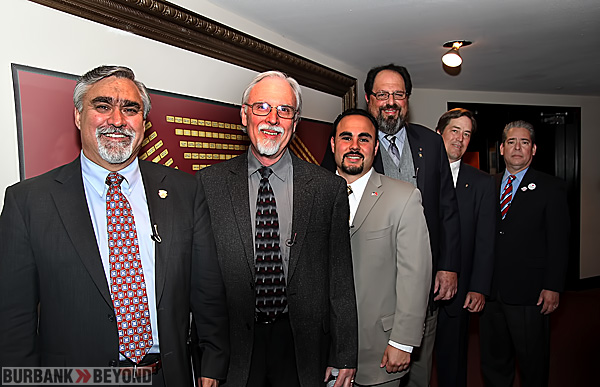 Each of the candidates were given one minute to fashion their response to the question and were also given the opportunity to give an opening and closing statement.  All of the candidates did a good job of staying within the given time with a light system used to give each candidate a visual aid on time

In a light-hearted moment just before the closing statements, candidates were each asked which movie they thought was going to win the Academy Award for Best Picture.  Lincoln defeated Argo 3 to 2 with Silver Lining Playbook picking up just one vote.

Ballots for the February 26 election have already been mailed to residents.

Leadership Burbank and The Burbank Chamber of Commerce are pleased to present a public event designed to help Burbank residents make informed decisions in the upcoming City Council election.

The two organizations will present an event on Wednesday, February 13that 6:30 p.m. at the Colony Theatre in Burbank, to which all six candidates for City Council have been invited. The discussion will be moderated by nationally known political pundit Dan Schnur, director of the Jesse M. Unruh Institute of Politics at the University of Southern California, who will lead participants through topics of discussion of concern to Burbank residents.

The Candidates Forum is sponsored by Southern California Gas Company and Woodbury University. Woodbury President Dr. Luis Calingo states, “As a longtime leader in leadership education both through its academic programs and its association with Leadership Burbank, Woodbury University is proud to sponsor this event.”

The public is encouraged to attend this important event free of charge and can RSVP by contacting the Colony Theatre at (818) 558-7000 ext. 276.

Editors Note:  David Nos is a candidate running for Burbank City Council.  There has been some confusion with is last name Nos and the Measure S initiative from the BUSD.  Nos has released the following statement to help clear the confusion.

To all Burbank voters. I am David Nos and my last name is not and I repeat IS NOT a campaign against the Safe School initiative Measure”S”. In fact I whole heartedly support Measure “S”. I have a Measure S sign along with my own “Just Say Nos” sign on my front lawn and my office window. I am sorry it has caused confusion. Nos is my family name and I am fond of it.

So please, DO vote for measure “S”, on March 5th, and let me know if you need a ride to the polls, I will be glad to oblige. Our schools need help. And remember, on February 26th. “Just Say Nos” position #1 on the ballot– Besides, if you elect me in the primary, I promise to take my signs down as fast as possible so there will be no confusion during the last week of the get out the vote for Measure “S” campaign. I say that kiddingly, but it is a solution don’t you agree?

The questions addressed in this forum will be student oriented and will be directed to their involvement and roles in the local school district, and the student’s educational future Junior State of America is a student-run organization founded in 1934.

The mission of JSA is to strengthen American democracy by educating and preparing high school students for life-long involvement and leadership in a democratic society. In JSA, students cultivate democratic leadership skills, challenge one another to think critically, advocate their own opinions, develop opposing views, and learn to rise above self-interest to promote the public good.

A Burbank Board of Education Candidate Forum, co-sponsored by the Burbank Chamber of Commerce and Burbank Business Partners, will be held Thursday, January 31 from  6:30pm – 8:00pm at  the Buena Vista Library Community Room (300 N. Buena Vista Street).

Armond Aghakhanian, Larry Applebaum, David Dobson, Steven Ferguson, and Charlene Tabet have all been invited to participate in the forum.

The forum will be moderated by: Elena Hubbell (former Burbank School Board Member, Burbank Educational Foundation) and Richard Raad (former Burbank School Board Member).
These candidates are running for two seats on the Burbank Unified school board. Moderated by two former board members, the candidates will debate their respective platforms before a community audience.