It has been a long wait for Burbank High sophomore Kiara Hernandez to make her debut after sitting out the first part of the season following her transfer from Burroughs.

Hernandez returned Wednesday for the sixth and final Pacific League match at Brookside Golf Club in Pasadena.
She shot an even-par 36 on the nine-hole course. The Bulldogs shot 214 as a team, but it was still 10 strokes short of toping league power Arcadia, who won by shooting 204. 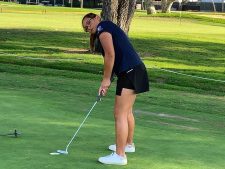 “The greens were a little faster than I thought they would be. I was hitting my drives pretty good today. My wedges were a little off, but my putting kind of came back,” Hernandez said. “It’s a course that I know pretty well. I’ve played in quite a few tournaments here. I usually play pretty good here and I’m not surprised that I shot even par, but I know that I can always do a little bit better.”

Arcadia’s Erica Lee was the low medalist as she shot 35.

Burroughs was led by Abby Powell, who shot 47. Jocelyn Kim shot 50. Sadie Demmert and Skye Brauer each shot 52. Annika Lindgad shot 53 for the Indians and Isabella Alderete shot 58.
“I feel like we’ve put all that we can put out there,” Hernandez said of her team finishing behind Arcadia.