An 18 year-old man from North Hollywood was arrested Thursday night, after a private jet making a landing at Bob Hope Airport, and a police helicopter looking for the suspect, were hit with a laser.

The incident began when a Cessna Citation twin-engine private jet was landing on the East/West runway at Bob Hope Airport.  The pilots were hit with a laser as they were on close final approach, about a half-mile from the runway.  When the plane arrived at Million Air, 2800 N. Clybourn Ave., they flagged down an Airport Police officer and reported the incident.

Ground units from the Airport, Burbank, and Los Angeles Police Departments converged on the 6400 block of Bakman Ave.  The suspect’s location is just north of Victory Blvd., and one block east of Tujunga Ave. in North Hollywood.  The area is just south of the landing pattern for the airport.   Airport Police officers contacted the residents of the home that the helicopter had pinpointed.   The 18 year-old son of the home’s owners admitted to officers that he was the one pointing the laser.   Officers confiscated a laser and booked it into evidence.

The unidentified teen was placed under arrest, and taken to the LAPD’s North Hollywood Station for booking.  Pointing a laser at an aircraft is a felony, and as of January 1, of this year, it is also a federal crime. 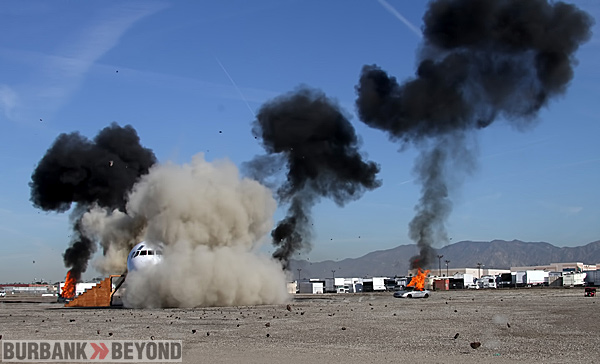 On March 20 a drill was held at Bob Hope Airport with the cause of the faked crash being a laser which blinded the pilots during the landing (Photo By Ross A. Benson)

This incident bears a chillingly eerie similarity to the scenario used in the Emergency Exercise that was held at Bob Hope Airport on March 20.  In the drill, a passenger jet is on close final approach to the runway, when someone on the ground shines a laser at the plane, blinding the pilots.  The plane makes a hard landing, partially collapsing the nose gear, and causing the plane to veer off the runway and crashing into a construction site before exploding and bursting into flames.  In the drill, 15 people are killed and 50 injured.   In the real thing Thursday night, Airport Police report that no one was injured

Note: Ross A. Benson contributed to the writing of this story.