Burbank police were called to the Chase Bank at Burbank and San Fernando for the second time this month at 2:23 pm on Monday when a teller reported that a male black around 60 years old, heavy set, bald with a white goatee, presented a note demanding cash.

After the man received the money he exited the bank toward Burbank Blvd. and was last seen on foot leaving the rear of the bank.  Police were on scene within one minute of receiving the call but were unable to find the suspect.

The robbery is very close as the last one on Saturday December 15 around 1:30 pm when Burbank police officers responded to the same location.  The unknown suspect (described as Male, Black approximately 50 years of age) entered the bank as a regular customer.

The suspect waited in line and when it was his turn, handed the teller a note.  The suspect was given an undetermined amount of US currency and he left the location.  There was no mention of a weapon and none was seen.

Police are investigating both robberies.

Two would be bank robbers got caught by Burbank Police before they could rob a local bank, because they didn’t have enough money to pay the cab driver who drove them to the bank.

Burbank Police report that officers responded to a report of a disturbance between a cab driver and two men, in the parking lot of Pavilions on Alameda Ave. at 12:35 p.m. on Tuesday, October 9.  When they arrived they found a cab driver who told them two men didn’t have enough money to pay their fare.  One of the men was still seated in the cab.  The other had gone inside the nearby Chase Bank at 1030 W. Alameda Ave.

Officers contacted the man in the cab, Spencer Wygle, 26, of Burbank.  They discovered that Wygle had a syringe loaded with what they believed to be heroin.  The cab driver directed them to the second man, who was waiting in line at the bank.  They escorted the man, Evan Kent, 27, of Glendale, out of the bank to talk to him about the cab fare. A bank employee then alerted officers to a bag that Kent had dropped just prior to the officers entering the bank.  For their safety, they searched the bag and found a Smith & Wesson handgun. The handgun was reported as stolen from a business in Los Angeles.  Further investigation and interviews led the officers to believe the two men were involved in a conspiracy to commit a robbery.

Both men were placed under arrest for conspiracy and robbery.  Wygle also had outstanding arrest warrants from Burbank for petty theft and possession of drug paraphernalia.   They bail for each man was set at $50,000.  They are due to appear in court on October 11.

Apparently, if you are going to take a cab to rob a bank, you should make sure you have enough cash to pay for your cab fare.

Remember buying shoes at Thom McAn at Verdugo and Olive, then later in life picking up some LP’s and CD’s from Wherehouse Records?   If you have driven by the last couple of days,   you may have noticed that construction is in full swing on the building.  On Wednesday the sign finally appeared that the old shoe store is going to be another Chase Bank with drive up window. 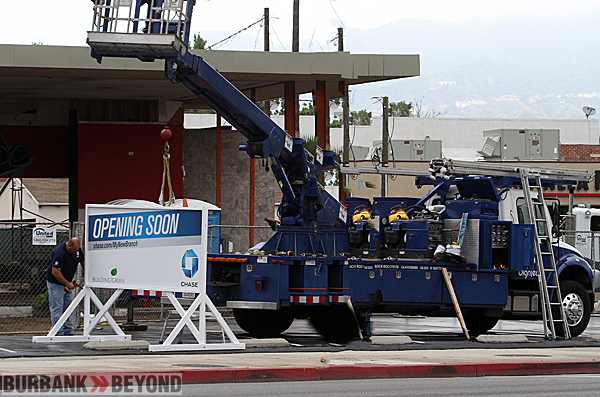 Curious minds have been asking, but the new installed Chase Bank sign says it all. (Photo by Ross A. Benson)

That’s what all the construction to the rear of the building has been about.  Chase obtained a conditional use permit from the Burbank Planning Board to put a driveway to the rear of the building, with a drive-up window.  The bank branch will feature automated teller machines in the front lobby, which also required a additional conditional use permit.  Construction will take several months to complete.

When the new bank branch opens,  it will make FIVE Chase Bank branches in Burbank.