It hardly seems fair that the Burbank High boys’ basketball team lost a game at the buzzer with the CIF Southern Section Division III-AA title in the balance.

These in particular helped the Bulldogs reach the finals for the first time since 1926 before losing 55-54 to Brentwood in overtime on Friday night at Azusa Pacific University. 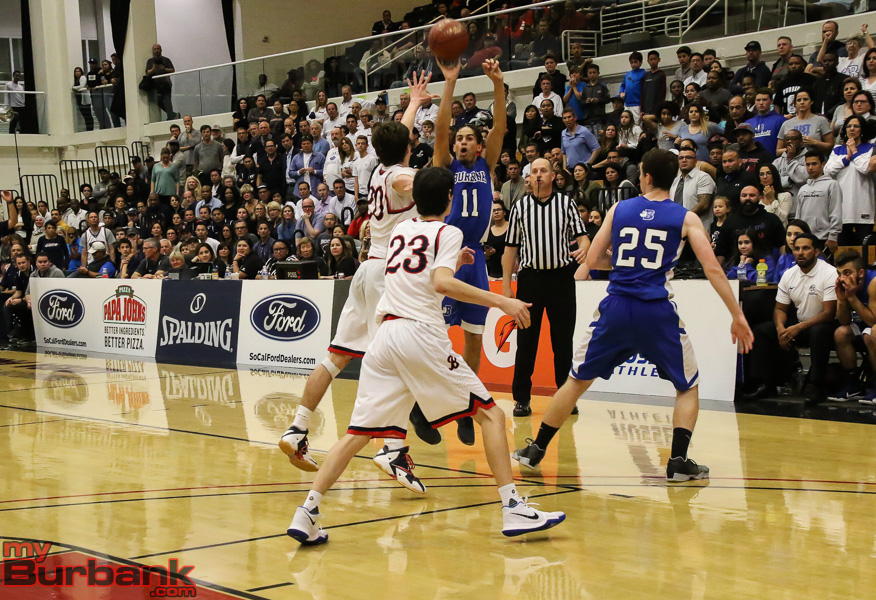 Down two points and 4.1 seconds remaining, forward Braelee Albert (27 points with 11 rebounds) hit an off-balance three-pointer with Sweeten, who pulled down seven rebounds and handed out one assist, guarding him.

Still, this playoff run was historic and will be remembered a long time.

“We’ve been playing together forever, from elementary school,” said Woods, who dropped in 10 points with a team-high 10 rebounds and one assist with four fouls. “The chemistry is there. We’ve got Coach [Jamayne] Potts and that was a blessing.” 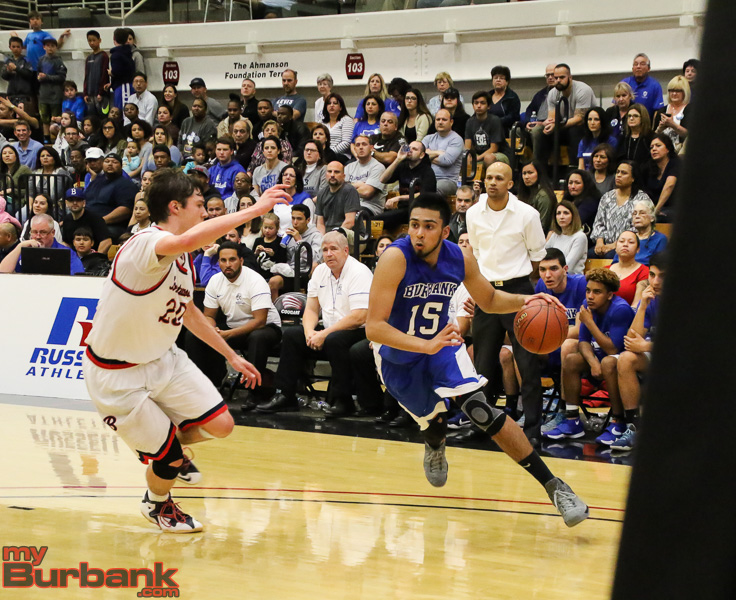 Forward Faraz Khandaker led the way with 18 points for the Bulldogs. The senior also added eight rebounds. (Photo by Ross A. Benson)

Woods went on: “Me and Cameron were supposed to go to Notre Dame, but I wouldn’t change anything.”

Sweeten is the floor leader and a quiet presence.

“I don’t dwell on those type of things much,” he said of the game-winning shot made by the Eagle sophomore. “The game plan was to switch on everything. We didn’t want to give up the three.”

Sweeten scored all nine points in the fourth quarter, including the tying hoop that made it 47-47 as the Bulldogs (19 of 62 for 30.6 percent) fell behind 35-29 after three periods.

“Coach drew up a play and I executed it,” said Sweeten of the tying bucket at the end of the fourth quarter.

Both teams struggled to find the hoop in the extra period with Burbank making two of six and the Eagles hitting three of nine. 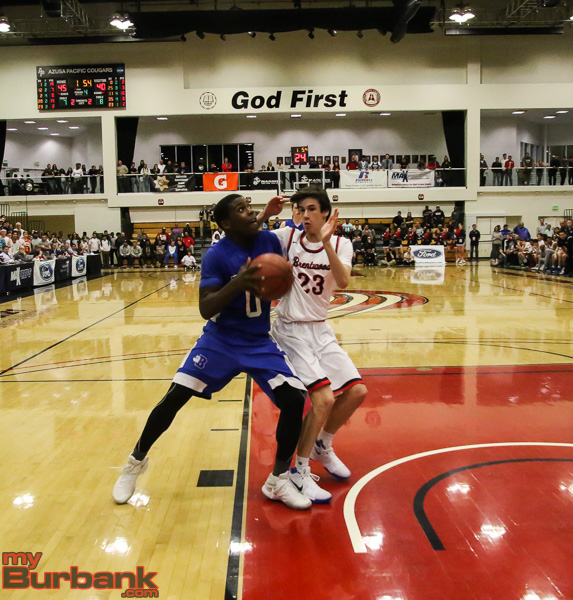 Senior point guard Cameron Sweeten scored all nine points in the fourth quarter, including the game-tying basket. (Photo by © Ross A. Benson)

Khandaker made seven of 15 from the floor and two of seven from three-point range.

Khandaker scored a team-best 18 points, including four points in overtime.

“I know our team, and even if it’s down 20 points or 30 points, we’re going to continue and keep on fighting,” said Khandaker, who led the way with nine points in the first half and ended the night with eight boards and two assists.

Woods said stopping Brentwood’s offense was a major priority. “We really pride ourselves on defense,” he said. “We want to play aggressively and our goal was to help each other out.”

Potts was of course disappointed in the outcome. “I’m extremely proud of my guys,” he said. “We were undersized, but we came back. I can’t say enough about the seniors. I’m really proud of this senior group.”

For the second year in a row, the Burroughs High boys’ varsity cross-county team qualified for the CIF Southern Section State Meet after placing sixth at the CIF Finals Division I meet at Mount San Antonio College on Saturday.

Meanwhile, the girls’ varsity squad finished 10th, which was the best-ever, with Emily Virtue getting second place in a time of 17 minutes and 45 seconds.

Virtue ran the seventh fastest time, had the highest placing ever by a boy or girl in school history, and became the fourth Burroughs runner to make the CIF State Finals, joining Sadee Martinez (2006 and 2007), Western Nelson (2008) and Anthony Monroy (2010 and 2011).

“The varsity boys struggled but gutted it out to qualify for the state meet, as the top seven qualify,” Burroughs coach John Peebles said. “The varsity girls ran strong to surprise many, but not the people who truly matter.”

The state meet will be held at Woodward Park in Fresno on Nov. 28.