Burbank Police took advantage of National Police Coffee with a Cop Day on Wednesday and set up camp at The Ugly Mug located on Burbank Boulevard. 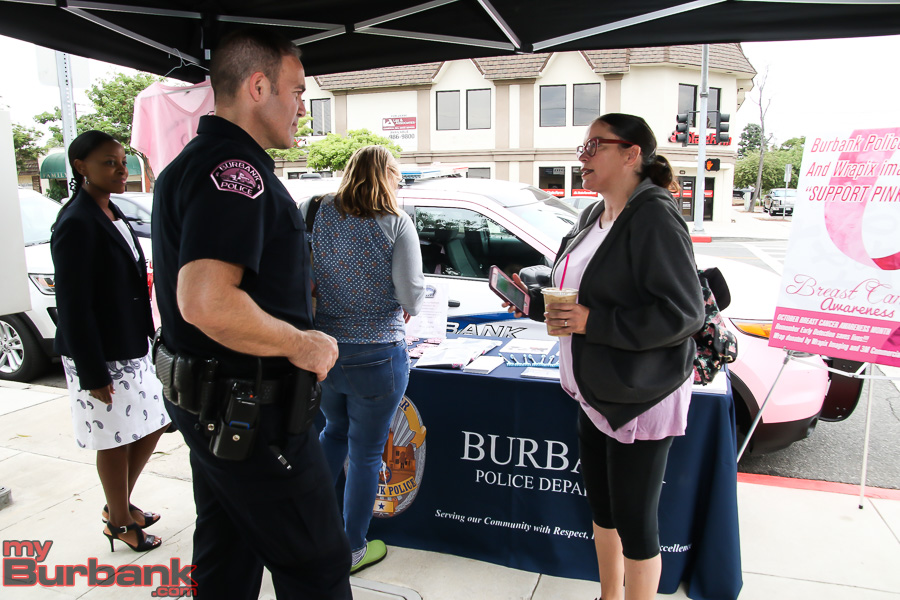 Several members of the public stopped by to ask questions, and to pose for pictures with Burbank PD’s pink patrol cruiser, which is raising awareness of breast cancer during the month of October. 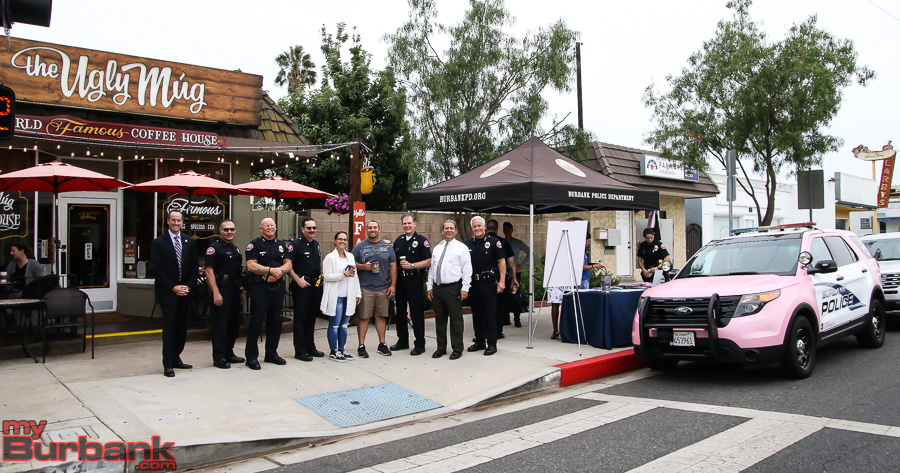 BPD Coffee with a Cop at Ugly Mug

Coffee with a Cop events are held numerous times throughout the year by the BPD for the public to meet local police officers and inquire about police operations, response times and other information. 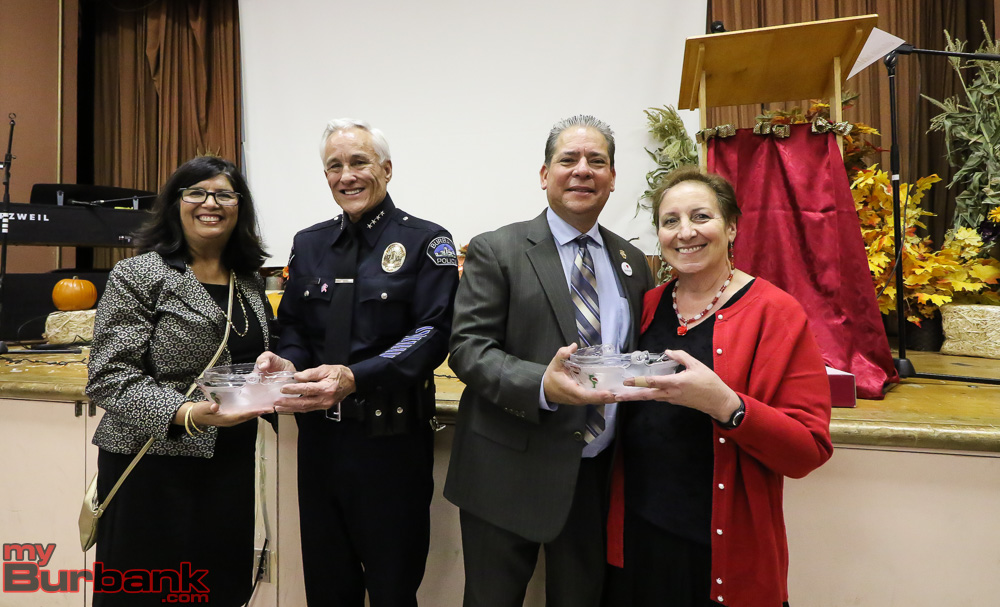 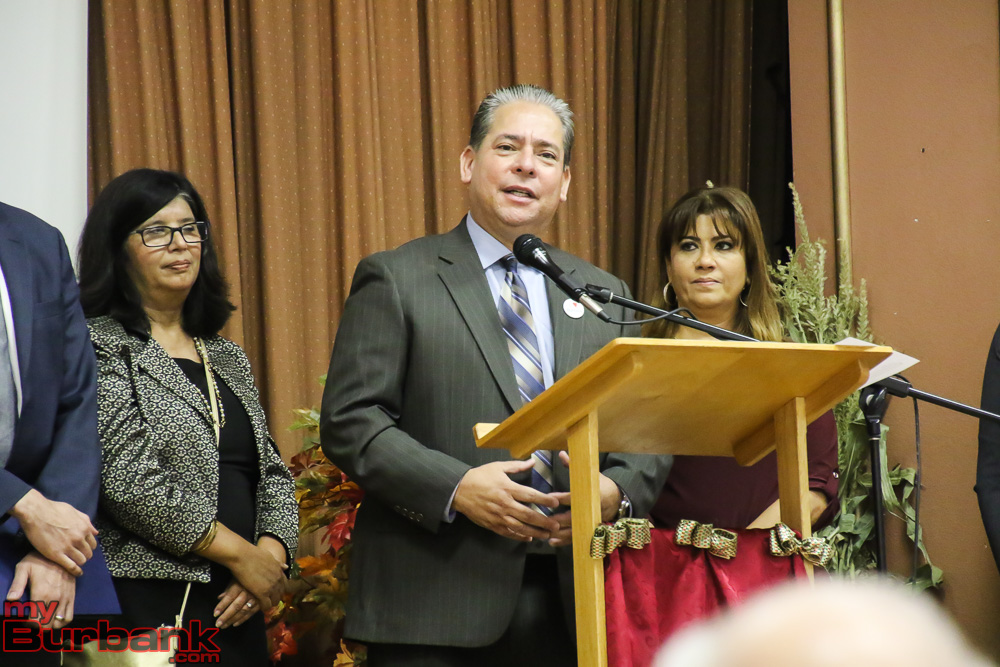 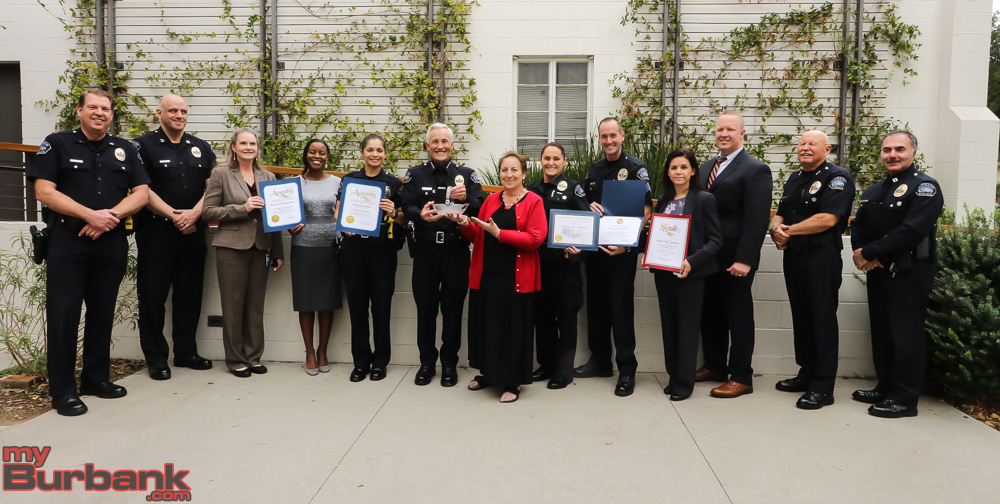 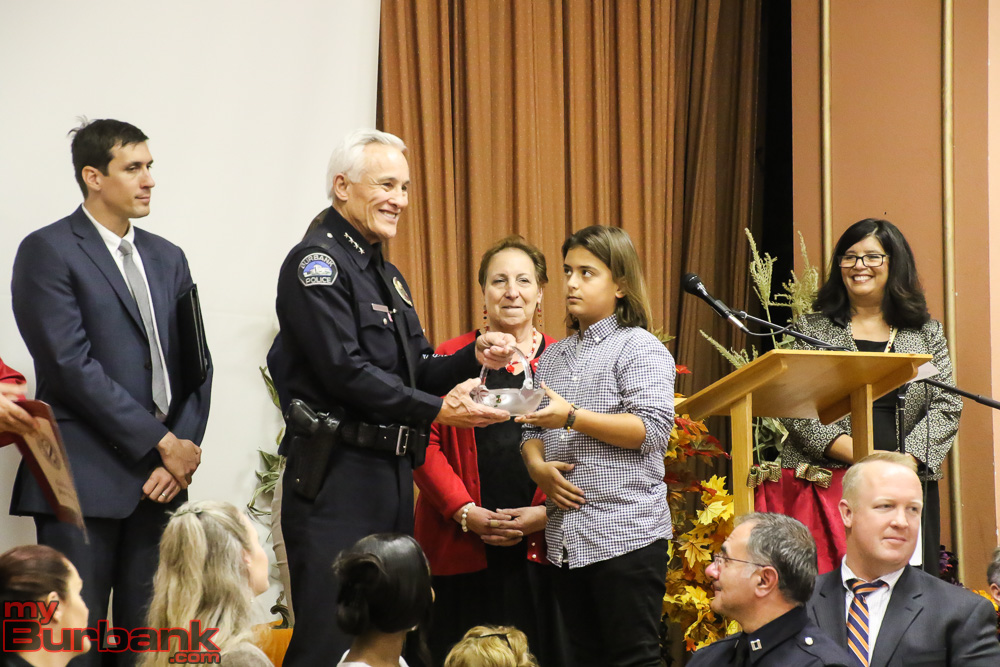 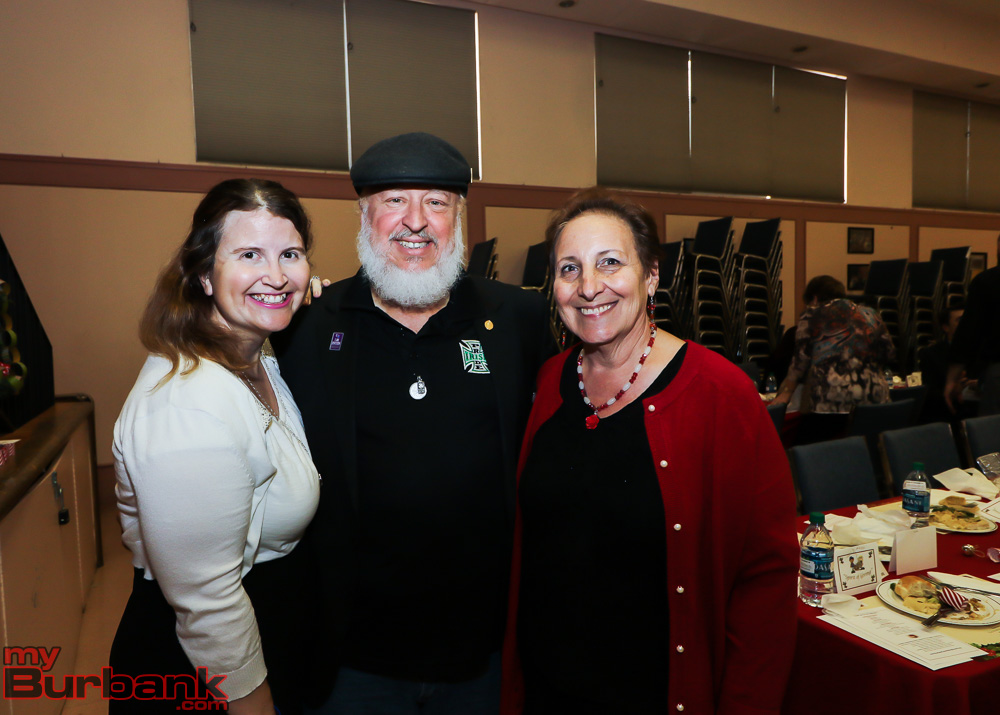 If you are up Saturday morning and would like to discuss the Burbank Police Department while enjoying a cup of coffee, you are invited to “Coffee With a Cop” this Saturday, September 16 from 9 am to 11 am at the Starbucks at 4207 Riverside Drive, right next to Bob’s Big Boy.

Residents are encouraged to stop by and talk with police about community concerns or get answers to their questions regarding the Burbank Police Department.

This is a great way to interact with law enforcement on a casual basis. 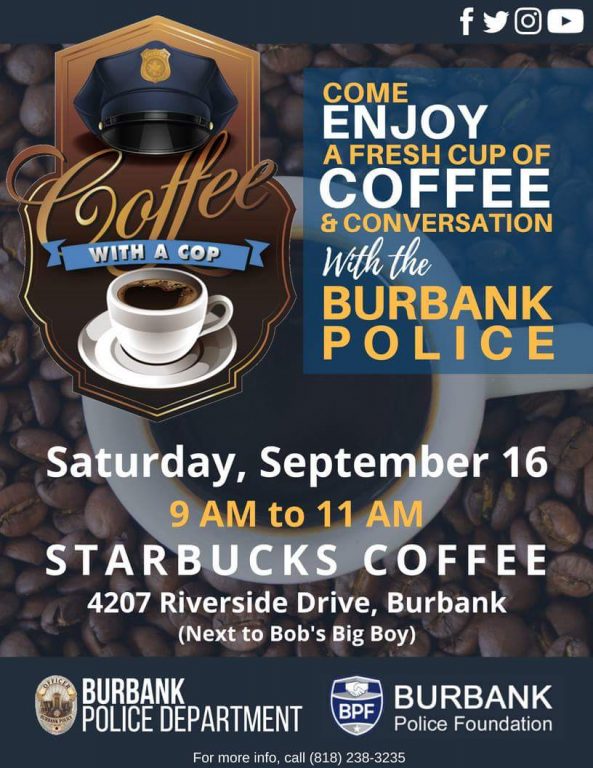 On Wednesday morning, Burbank Police command staff and officers joined residents at Caffeine 2306, a new coffee shop at 2306 W. Burbank Blvd., for coffee and casual conversation.  According to Deziree Williams, owner of 2306 Caffeine, shortly after opening in October an officer stopped by for a coffee, and suggested this might be a great spot for the next “Coffee with a Cop” event. 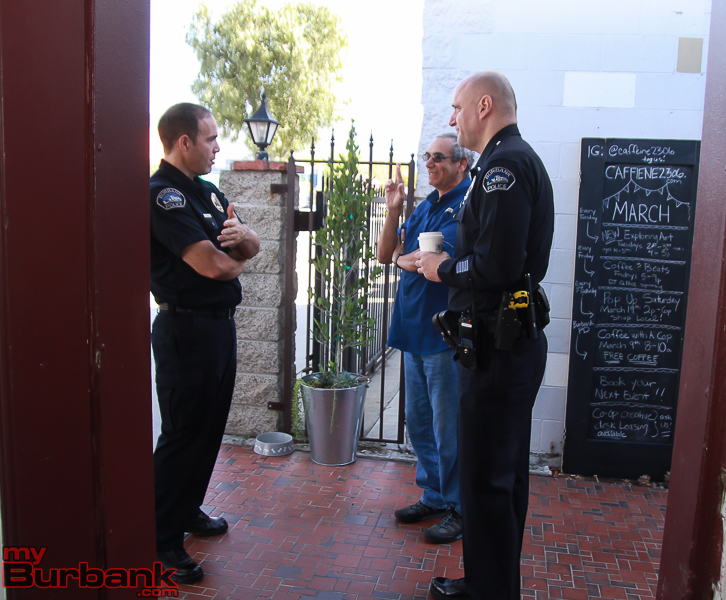 Coffee with a Cop is a recurring event where the police set up shop with a local café, and just spend a few hours with local residents and visitors, getting to know each other, sharing ideas, and having a bit of fun.

One resident, Lizelle Brandt, brought her 4-month-old baby by and simply Wanted to meet a cop, and say “thank you” for keeping her family safe.

Sgt. Joshua Kendrick, Burbank Police spokesman, noted that “Coffee with a Cop” is a project the department tries to support once every 2 to 3 months.    “We try to move the event all over the city” continued Sgt Kendrick.  “However, this is really the first time we’ve been in this area.” 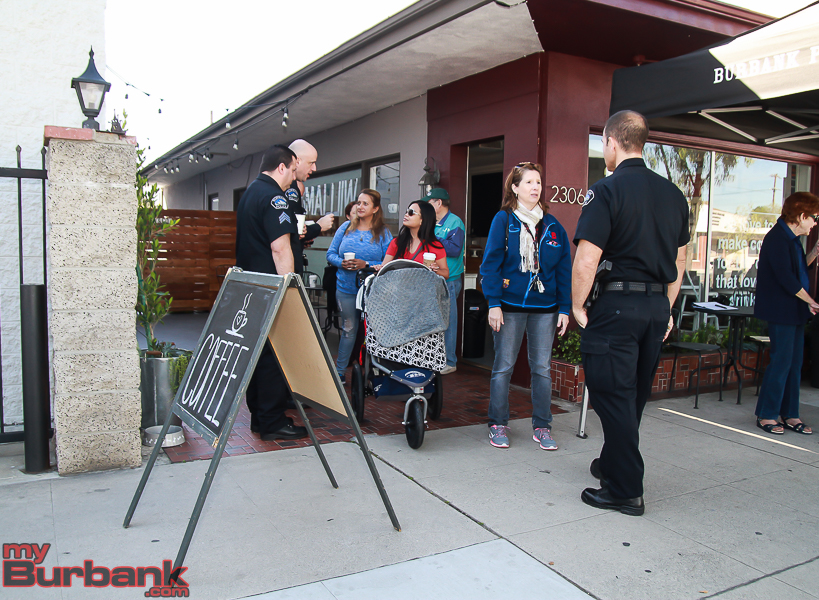 Amal De La Rosa stopped by and hoped she could pass on to the police that she’s concerned about speeders in her neighborhood during the evening.  With Chief Scott LaChasse, and a large group of police officers, Lieutenants, and Captains on site, eager to meet and chat with local residents, Ms. De La Rosa found the perfect audience to listen and consider her concerns.

Burbank Vice Mayor Jess Talamantes, also stopped by, also extending his welcome to the new Caffeine 2306 owner, and greet a few residents and visitors stopping by for a free coffee, provided by the Burbank Police.

Caffeine 2306 is not only a coffee shop, but also a cooperative shared workspace, offering shared and temporary working space, desks, and meeting rooms for entrepreneurs and others needing a low-cost place to work.  The coffee is great, the working spaces ready to support generating some creative ideas, and the owners happy to be of service. 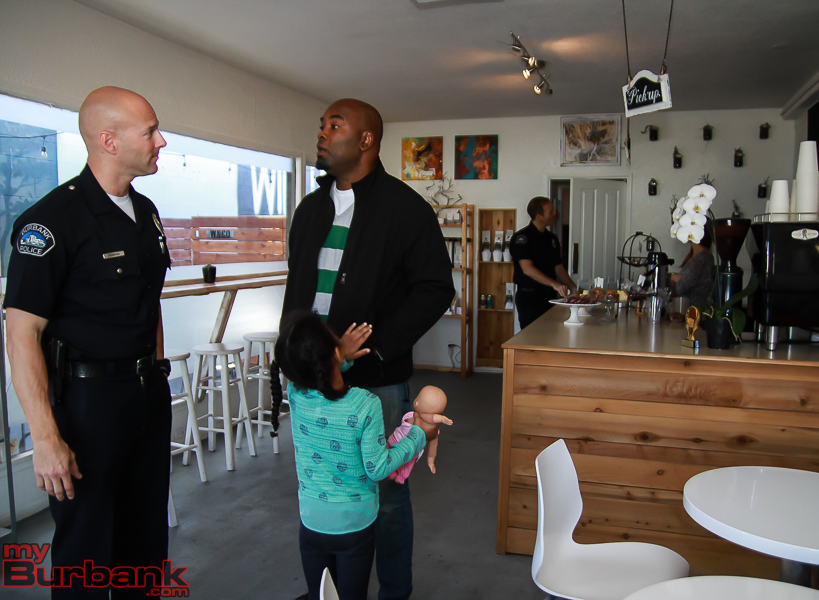 Coffee with a Cop is an international project which started in Hawthorne, CA, now stretching across the US and Canada, Europe and Australia, and even Africa, “bringing police officers and community members together, over coffee, to discuss issues and learn more about each other – one cup at a time.“

You can keep up to date on Coffee with a Cop and other Burbank Police community programs either at the Burbank Police Department’s webpage (www.burbankpd.org), or on social media.